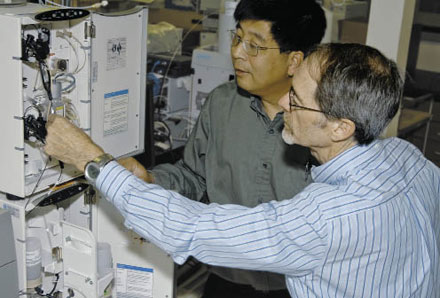 Scientific instrument maker Thermo Fisher Scientific will acquire yet another competitor, liquid and ion chromatography leader Dionex, in a transaction valued at $2.1 billion. Thermo will pay $118.50 in cash for each Dionex share, representing a 21% premium over Dionex’ closing stock price on Dec. 10.

The deal, expected to close in the first quarter of 2011, will bolster Thermo’s expansion in Asia and expand its scientific instruments business in the water quality, consumer safety, and life sciences markets.

Dionex, based in Sunnyvale, Calif., has 1,600 employees in 21 countries. Its sales in the fiscal year ending June 30 were $420 million. Thermo, in contrast, has 35,000 employees and about $10 billion in annual sales of instruments, consumables, and services. Dionex will join Thermo’s analytical technologies segment.

Strategically, the deal is a good one for Thermo, says Dan Leonard, a stock analyst with investment banking firm Leerink Swann. It expands the Asian footprint of the company, which now derives 11% of its revenue from Asia, versus 35% for Dionex.

The purchase should enable Thermo to increase sales of mass spectrometry instruments that are coupled with its own chromatography equipment, Casper told analysts in a conference call after the acquisition announcement. About half of Thermo’s mass spectrometers currently include a chromatograph—typically a gas chromatograph—from Thermo. The rest come from other vendors.

In fact, Thermo and Dionex have had a commercial relationship for years, says Gregory J. Herrema, president of Thermo’s analytical instruments business. Many of Thermo’s mass spectrometers are sold with Dionex chromatographs. However, the companies only became serious about combining their businesses this fall when Casper and Dionex CEO Frank Witney began to talk in earnest, Herrema says.

It’s too early to say exactly how the combined business will look, says Herrema, who will oversee teams integrating the two firms. “Both companies have a significant presence in the San Francisco Bay Area,” he says. “We see that continuing in the future.”

The firms do envision cost savings of $60 million in the third year of operating together. About two-thirds of those savings will come from overhead cost reductions, Herrema says, and the balance will come from selling each company’s instruments through the other’s sales force.

Thermo, which was formed in the 2006 merger of Thermo Electron and Fisher Scientific, has been a leading consolidator in the scientific services arena. Two weeks before announcing the Dionex deal, Thermo signed an agreement to acquire consumables and lab chemicals supplier Lomb Scientific for $34 million. Other Thermo acquisitions this year include Ahura Scientific, Finnzymes, NovaWave Technologies, and Fermentas.