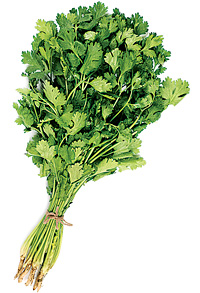 A couple of years ago, I discovered my aversion to cilantro.

My wife, Linda, made black-eyed peas loaded with the stuff. To her, it was the pinnacle of bean preparation. I, however, pushed the plate away after a couple of bites. "How could she possibly like such a repugnant flavor?" I wondered.

I started noticing CILANTRO more and more in restaurant salsas and even gourmet sausages. Apparently, the ingredient is becoming increasingly sought after as the American palate grows more worldly and sophisticated.

I got on the Internet to find out if other people shared my views on cilantro. Googling "hate cilantro" introduced me to a website, a blog, and even some Facebook groups dedicated to a strong dislike of cilantro and the seed of the cilantro plant, coriander.

The complaint aired most often about cilantro is that it tastes like soap. I agree and add that I detect a hint of rancidity, as if the cilantro-containing food were unsafe to eat. It's no wonder that "vile" and "evil" are adjectives that cilantro haters use often. And what they want, failing an outright prohibition, is for cilantro-laden foods to be prominently labeled as such.

But there is another camp: the cilantro lovers, like my wife. They say it tastes fresh and citrusy. To them, many recipes, especially those for Latin foods, simply aren't right without it. Such people are beaming over cilantro's growing popularity.

Scientists have noticed how individuals can have such strong, incongruous opinions about the same herb. And these scientists are pointing to genetics.

A link between genetics and the senses of smell and taste isn't unusual. The most famous example is phenylthiocarbamide. When DuPont researcher Arthur L. Fox prepared a quantity of this compound in his Wilmington, Del., lab in 1931, a coworker complained of developing a bitter taste from the dust that formed even though Fox sensed nothing. This serendipitous discovery of an inherited trait—the ability to taste phenylthiocarbamide—turned out to be an important moment in the study of heredity.

Charles J. Wysocki, a scientist at the Monell Chemical Senses Center, in Philadelphia, has been chronicling subjects' reactions to cilantro. He says that what people like or dislike about it is actually its smell, not its taste.

To study the herb, Wysocki and his colleague George Preti have been using gas chromatography/olfactometry, a technique that separates the components of a complex sample and allows subjects to smell them one at a time. Wysocki says that people who like cilantro detect the pleasant, fresh scent and even the soapy scent, but people who dislike it do not detect the pleasant scent. "We are working on the hypothesis that many dislikers of cilantro are missing some critical component that allows others to appreciate it," he says. Furthermore, identical twins tend to share cilantro preferences, whereas fraternal twins do not have such a strong correlation, he adds.

Gas chromatography/mass spectrometry data have identified a probable component of the pleasant aroma: 2-dodecenal. "To people who like cilantro, it smells like that aromatic green note," Wysocki says. Scientists have yet to identify the chemical culprit behind the soapy smell.

As for the prevalence of cilantro hatred, Wysocki says, in his survey of more than 100 subjects, 60% disliked or were neutral to cilantro.

One might think that a large food company would steer clear of cilantro. McDonald's has proven that's not so. Its Southwest Chicken Salad, introduced in 2007, has a cilantro-lime glaze on the chicken, as well as cilantro mixed into the vegetable blend and in a packet of salad dressing that comes on the side.

I brought the salad home one night and tasted it. The cilantro scent wasn't overbearing, but it was noticeable and will prevent me from ordering the salad for myself ever again. But my wife gave it her seal of approval.

Food Science
Food chemists uncover the secrets behind pretzels’ unique scent
Environment
The scientists who sniff water
Environment
Bumblebees leave foot odor behind on flowers
Share X
To send an e-mail to multiple recipients, separate e-mail addresses with a comma, semicolon, or both.
Title: Vile Weed Or Essential Ingredient?
Author: Alexander H. Tullo
Chemical & Engineering News will not share your email address with any other person or company.