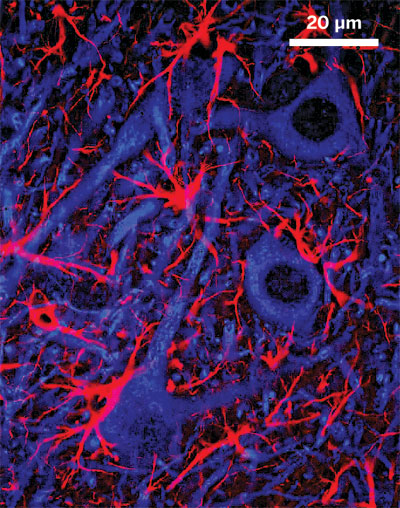 Astrocytes (red) mingle with neurons (blue) in the brain, but it's debatable whether calcium signaling helps astrocytes shape neuronal activity.

Glial cells provide structural and nutritional support to neurons in the brain. Many neuroscientists believe that glial cells also influence neuronal function at synapses through calcium-dependent release of chemical messengers known as gliotransmitters, thereby affecting learning and memory. Several studies bolster this contention, but research just published in Science calls it into question (2010, 327, 1250).

Regardless of which hypothesis proves correct, researchers agree that neurons and glial cells have a working relationship. Presynaptic neurons release neurotransmitters that bind not only to receptors on postsynaptic neurons but also to receptors on adjacent astrocytes, a type of glial cell. This binding liberates calcium stored in the astrocytes' endoplasmic reticulum, explains Frank Kirchhoff, a neuroscientist at Max Planck Institute of Experimental Medicine, in Göttingen, Germany, in an accompanying commentary (Science 2010, 327, 1212).

Prior studies have suggested that the freed calcium stimulates astrocytes to release serine, glutamate, and adenosine triphosphate, which serve as gliotransmitters that affect synaptic activity. These studies relied on pharmacological approaches, such as bathing astrocytes in compounds that activate their calcium receptors, to manipulate calcium levels in the cells.

"Although this scenario may well explain how astrocytes directly affect neuron function, concerns have been raised as to whether such 'gliotransmission' is merely an experimental artifact," Kirchhoff writes.

The researchers developed two lines of genetically modified mice in which receptor-mediated calcium release was either prevented or could be stimulated on command in astrocytes. Electrical activity assays and fluorescent imaging of brain slices from the genetically modified mice showed these changes had no effect on synaptic activity or plasticity.

The data indicate that calcium signaling is not sufficient to trigger gliotransmission by astrocytes, Agulhon says, "so we have to reconsider what has been claimed so far about the role of astrocyte calcium excitability in synaptic activity and plasticity." But she adds that "even though our data show that astrocyte calcium signaling is not involved in release of gliotransmitters, astrocytes are still partners of neurons for many other physiological functions."

Agulhon acknowledges that the new findings will be controversial, so she next plans to use two-photon imaging to study interactions between astrocytes and neurons following sensory stimulation in living animals.

Neuroscience
Ketamine is revolutionizing antidepressant research, but we still don’t know how it works
Biological Chemistry
Neurons Can Control Their Activity Via DNA Methylation
Biological Chemistry
Steps Filled In Along Itch Pathway
Share X
To send an e-mail to multiple recipients, separate e-mail addresses with a comma, semicolon, or both.
Title: Questions Arise Over Interaction Between Brain Cells
Author: Sophie L. Rovner
Chemical & Engineering News will not share your email address with any other person or company.