Toxic Substances: The dust in U.S. homes may be a primary exposure source 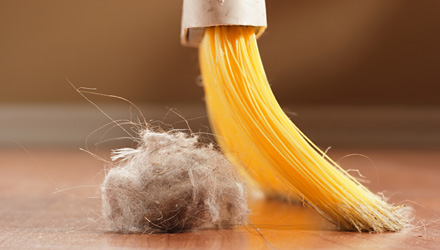 Diet is the primary route of people's exposure to most persistent, bioaccumulative, and toxic compounds, but new research published in Environmental Science & Technology (DOI: 10.1021/es100697q) finds that levels of polybrominated diphenyl ether (PBDE) flame retardants in dust from U. S. homes correlate strongly with the concentrations in residents' blood.

For decades, a wide variety of U.S. consumer goods contained PBDEs, including automobiles, airplanes, electronics, home furnishings, and furniture. U.S. manufacturers voluntarily discontinued two of the three PBDE formulations in 2004 will phase out the third by the end of 2012.

PBDEs may cause health effects in the general population, says Tom Webster, associate chair of the department of environmental health at Boston University School of Public Health. The U.S. Centers for Disease Control and Prevention's National Health and Nutrition Examination Survey data (Environ. Sci. Technol., DOI: 10.1021/es702451p) suggested that PBDEs are found in the blood of almost all Americans. Recent epidemiological studies have linked higher uptake of PBDEs to decreased IQ and neurodevelopmental impairments in children and to fertility issues in adults (Environ. Health Perspect., DOI: 10.1289/ehp.0901340, 10.1289/ehp.0901332, and 10.1289/ehp.0901450).

Scientists think that Americans' primary contacts with PBDEs are through diet and household dust, but the latter source of exposure has rarely been investigated. The first investigation of the correlations in the U.S. between PBDE concentrations in house dust and in people's bodies was by Webster and colleagues, who focused on nursing mothers' breast milk (Environ. Sci. Technol., DOI: 10.1021/es0620282). The new work, by John Meeker and Paula Johnson of the University of Michigan School of Public Health and colleagues, analyzed human serum from U.S. men and women.

The project showed that the PBDEs in house dust correlated with the levels in serum samples from couples living together. The researchers assessed the concentrations of PBDEs in the couples' homes by using gas chromatography and mass spectroscopy on dust from the residents' vacuum bags.

The compounds with the strongest correlations were associated with the discontinued pentaBDE formulation, which was primarily used as an additive with polyurethane foam. The researchers found that the dust contained high concentrations of BDE-209, which is the main component of decaBDE, the only PBDE formulation still in use. But BDE-209 appeared in the serum of only two people. Meeker says that he is investigating alternative ways to detect markers of decaBDE exposure in the body.

Scientists want to pinpoint how people take up the PBDEs from dust so that they can devise strategies to reduce exposure. Webster and Heather Stapleton, of Duke University's Nicholas School, have found that PBDEs can adhere to the oil on people's hands (Environ. Sci. Technol., DOI: 10.1021/es7029625). The two are investigating whether the concentrations of PBDEs in people's blood correlates with the amount on their hands. Although the results aren't in, Webster and Meeker advise that frequent hand washing could help protect people from PBDE exposure.