Energy: A new source of electricity could come from mixing fresh and salty water 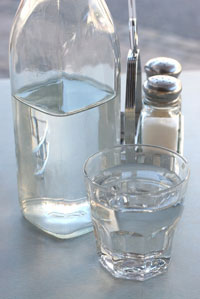 During lectures, Bert Hamelers displays two photos side by side: One is of the Hoover Dam, a thundering cascade of water. The other is of the River Rhine flowing gently into the North Sea. It might not seem intuitive, but each system has comparable power-generating capacity, says Hamelers, an assistant professor at Wageningen University, in the Netherlands. The Hoover Dam already generates enormous amounts of hydroelectricity every day. Scientists could extract just as much power by harnessing the entropy created when the Rhine's fresh waters mix with salty waters, he says. In Environmental Science and Technology (DOI: 10.1021/es100852a), Hamelers and colleagues introduce a new technology to convert into electricity the entropy created when two solutions of different salt concentrations come together.

Hamelers' technology is one of several emerging to produce electricity from salinity differences. Unlike other approaches, however, it doesn't rely on auxiliary components, which can boost cost and complexity. For instance, a competing method known as capacitor-double-layer expansion (CDLE) harnesses electricity from the flow of salt ions over porous carbon electrodes, but it requires an external battery to jumpstart the cycle. In contrast, Hamelers' technology derives its charge from an ion-exchange membrane, which converts the flow of sodium and chloride ions into electricity as fresh and saline water alternately flow across it. The membrane is sandwiched between the same porous electrodes used in CDLE. Hamelers calls his device a membrane-modified supercapacitor flow cell.

Doriano Brogioli, a researcher at the Italian National Agency for New Technologies, Energy and Sustainable Economic Development, in Rome, who developed CDLE in 2009 while working at Milano-Bicocca University, explains that CDLE and Hamelers' technology both use porous electrodes, which, when immersed in salt solutions, store charge as capacitors do. Given that they're made of activated carbon—which has a surface area of roughly 1,000 square meters per gram—the electrodes behave as supercapacitors, with strikingly high energy density, Brogioli says.

CDLE and Hamelers' technology have different pros and cons, Brogioli says. “Membranes are more expensive," he says, "but the dependence on batteries makes CDLE more sensitive to leaking currents."

Hamelers proposes as a first application that his technology be deployed to generate electricity where rivers flow into the sea. But other scenarios are possible, he says: scientists could tap into salinity differences generated by evaporating salt solutions or into industrial processes that generate brine. "We're now looking at ways to generate higher power density, perhaps by stacking membranes on top of each other," he says. "This is going to be a new source of energy and it offers a lot of creative freedom to think of ways to make the technology better."

Pollution
Satellites can now see air pollution inequality within cities
Persistent Pollutants
Goodbye to some PFAS in food packaging
Pollution
Mercury makes it deep into marine trenches
Share X
To send an e-mail to multiple recipients, separate e-mail addresses with a comma, semicolon, or both.
Title: Power From Entropy
Author: Charlie Schmidt
Chemical & Engineering News will not share your email address with any other person or company.