SERS On The Cheap

Spectroscopy: An ink-jet printer could make the technique more affordable and accessible

MONEY SAVER
[+]Enlarge
Droplets of a fluorescent dye bead up on paper spotted by an ink-jet printer with silver nanoparticles (top). An electron micrograph shows nanoparticles embedded within the paper's cellulose fibers (bottom).</a> 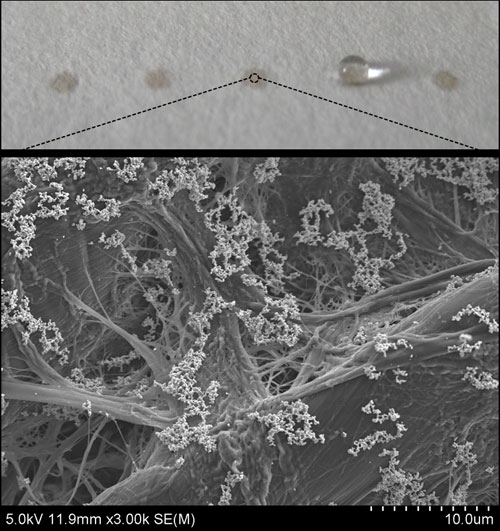 Droplets of a fluorescent dye bead up on paper spotted by an ink-jet printer with silver nanoparticles (top). An electron micrograph shows nanoparticles embedded within the paper's cellulose fibers (bottom).</a>

In the past decade, SERS has become a hot technique for biomedical and chemical analyses. After researchers mix metal nanoparticles with their samples, the electronic properties of the particles amplify the characteristic Raman signals of the sample molecules. These amplified signals open the door to many applications: For instance, a scientist can identify pigment compounds in pastel chips from a 19th-century painting or track the rise and fall of blood glucose in a live mouse. The technique is so sensitive that researchers can even detect single molecules.

But there is a hurdle: Fabrication of SERS substrates, the nanoparticle-laced materials that scientists apply their samples to, often requires expensive, technically challenging methods, which makes the process impractical for non-specialists. And when scientists purchase them instead of making them, the substrates have a shelf life of only a few days, which makes them impractical for studying environmental samples out in the field.

Maryland bioengineer Ian White had an epiphany one day on how to simplify the production of SERS substrates. His graduate student Wei Yu was describing how engineers can deposit silver nanoparticles on paper with a store-bought printer to make miniature electronic circuits. White realized that the paper could have a completely different application: a cheaper SERS substrate.

To test the idea, White and Yu surveyed 21 different types of paper, including coffee filters and napkins, but found that optical signals from the chemical additives in most paper products were too strong and would drown out sample signals. Chromatography filters worked best because they consist only of cellulose, which does not produce a strong signal.

Next the investigators grabbed a $60 ink-jet printer and replaced the ink in its cartridge with a silver-nanoparticle solution. Because chromatography filters wick aqueous samples, the researchers also included a cartridge filled with a hydrophobic chemical, commonly used by printer-paper manufacturers to stop ink from blurring. They programmed the printer to deposit a line of 1-mm-diameter spots of the nanoparticle solution every 5 mm. The printer covered the rest of the paper with the hydrophobic chemical so that samples would not spread beyond the nanoparticle spots. The reagents cost about 2 cents per cellulose filter.

White and Yu tested their novel substrate with a fluorescent dye called Rhodamine 6G, the gold standard for SERS. They pipetted drops of it onto the nanoparticle spots and measured signals with a conventional spectrometer. They could detect as little as 10 femtomoles of the dye in a 1-μL droplet.

Biomedical engineer Shuming Nie at Emory University calls the work "an important technical advance" that could encourage more SERS studies. But he cautions that the femtomole detection needs improvement because it falls short of the sensitivity of conventional substrates.

Diagnostics
Prototype diagnostic patch picks up on a chemical below the skin
Analytical Chemistry
An ion-selective detector made of paper
Analytical Chemistry
Paper microfluidics device enhances cancer biomarker detection
Share X
To send an e-mail to multiple recipients, separate e-mail addresses with a comma, semicolon, or both.
Title: SERS On The Cheap
Author: Rajendrani Mukhopadhyay
Chemical & Engineering News will not share your email address with any other person or company.