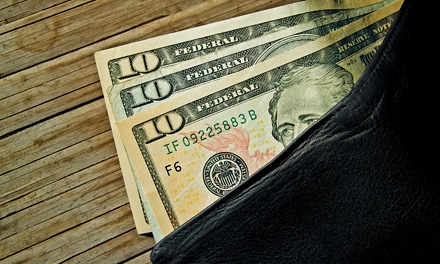 The severe national recession of the past several years is having a negative impact on the employment and the starting salaries of chemists and chemical engineers. The latest data from the American Chemical Society on graduates from 2009 found that median starting salaries fell about 5% for those receiving bachelor’s and doctoral degrees compared with the previous year. New graduates with master’s degrees appeared to have gotten a jump in pay. 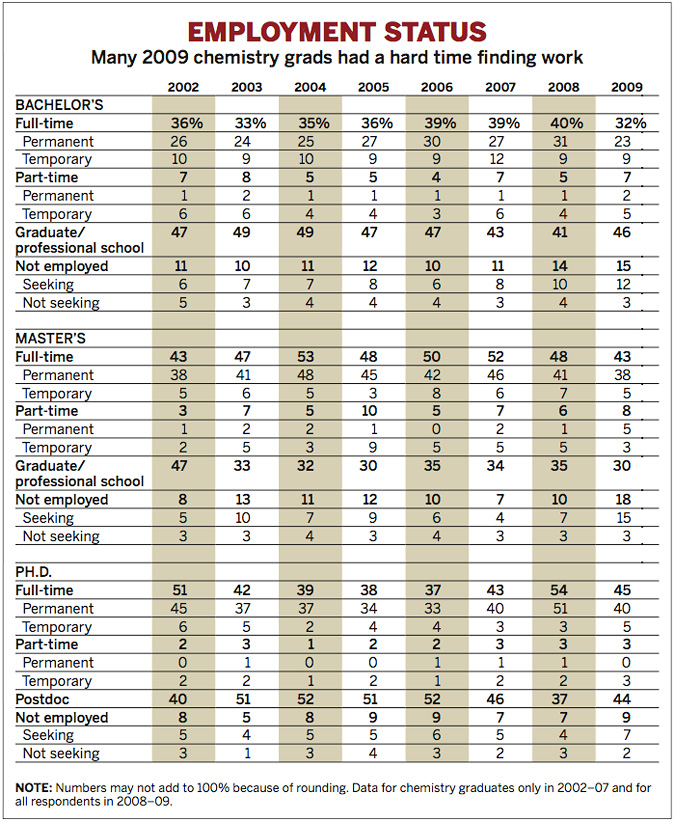 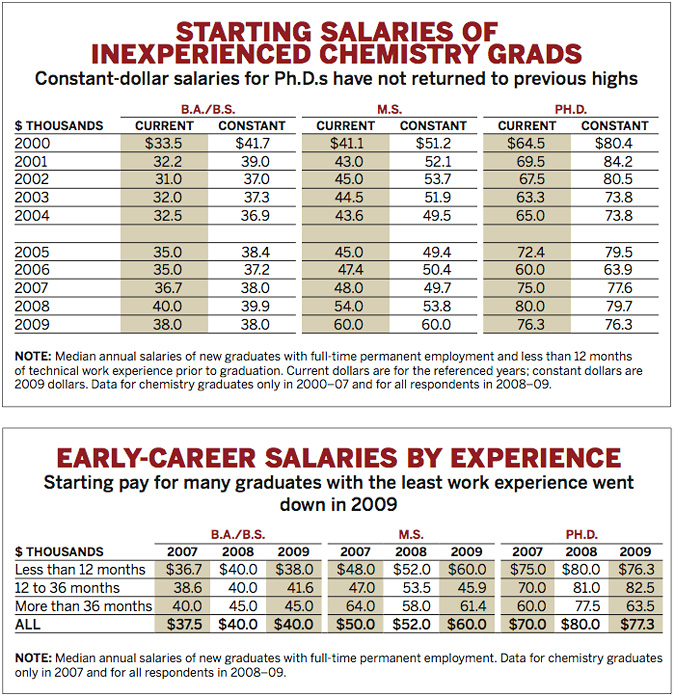 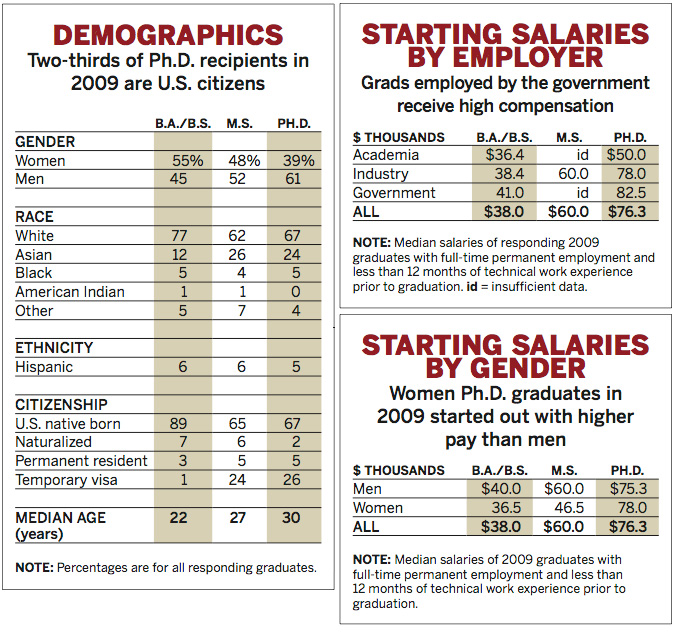 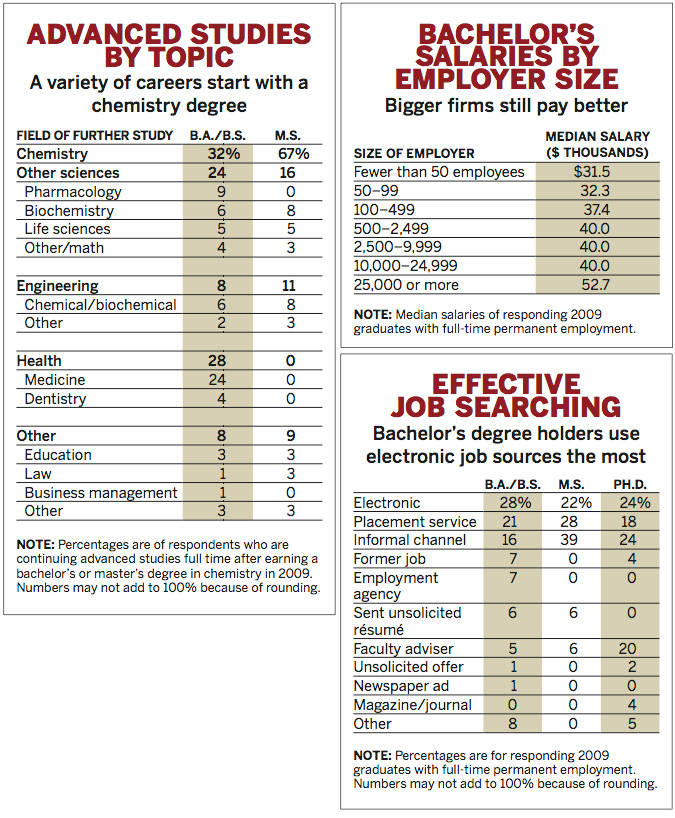 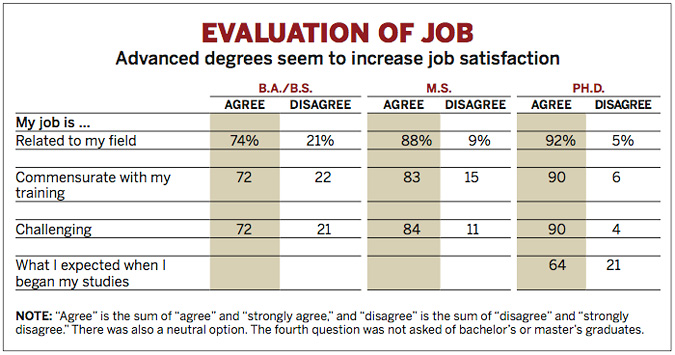 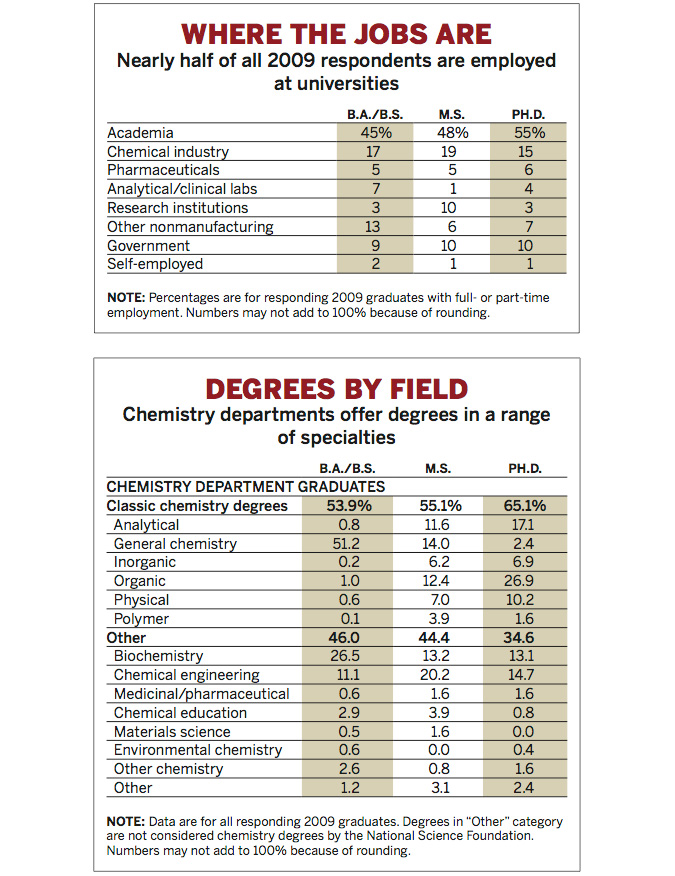 The results from the ACS survey of employment and starting salaries also show that these recent graduates had a more difficult time finding permanent employment than did their predecessors.

These numbers are especially high when compared with the unemployment figures of the Bureau of Labor Statistics for the same period. BLS reports that total civilian workforce unemployment at the end of 2009 was about 9%, lower than the survey figures for both bachelor’s and master’s degree graduates that year. But the BLS unemployment rate for college graduates over the age of 25 was less than 5%, making survey respondents of all degree levels significantly less employed than the national average.

Similarly, master’s graduates reported a drop in the rate of employment, with just 43% holding full-time jobs in 2009, compared with 48% the previous year. For these 2009 graduates, 38% had permanent jobs and 5% were in temporary positions. Employment of doctorates fell, too, dipping to just 45% holding full-time jobs, down from a high of 54% in 2008.

These data come from the annual survey of new graduates conducted by Gareth S. Edwards and Jeffrey R. Allum of the ACS Department of Member Research Technology, which is under the guidance of the ACS Committee on Economic & Professional Affairs. The survey was sent to graduates in early October 2009, and data were collected until January 2010. For the 2009 study, more than 10,268 recent graduates were sent surveys, and a total of 2,429 usable responses were returned, a 24% response rate. This is the same response level as the most recent comparable ACS starting salary survey, which was conducted in 2007. Of the 2009 respondents, 289, or 12%, got their degrees in chemical engineering.

In addition to the mixed results on starting salaries, the ACS survey also collected data on types of jobs, size of employer, and gender. Grouping job types into broad categories, the survey found that government jobs pay the highest median starting salaries. Bachelor’s degree graduates got $41,000 for government positions in 2009 and Ph.D. graduates received $82,500. This compares with median salaries of $36,400 and $50,000 for bachelor’s and Ph.D. recipients, respectively, at academic jobs. Salaries for industry jobs fell in between at both degree levels, with bachelor’s degree graduates receiving $38,400 and Ph.D. recipients getting $78,000. Data were insufficient to make a similar comparison for master’s graduates.

For more specific work functions, the survey found that for bachelor’s degree graduates, jobs involving chemical development and design offered the highest starting salary. The median salary for such jobs was $68,200, compared with jobs in production and quality control, at $43,300, or teaching, for which the median starting salary was $41,600.

In almost all categories measured by the survey, women were found to receive lower median salaries than men. For all respondents, men with a new bachelor’s degree received $40,000, whereas women in the same category were paid $36,500. With a master’s degree, men got $60,000 and women, $46,500. But at the doctorate level, starting salaries seemed to flip-flop, with men reporting $75,300 and women reporting $78,000.

One factor that can influence starting salary is the area of specialization. ACS found that most respondents receive degrees in classical areas of chemistry. General chemistry is cited by slightly more than 51% of those receiving bachelor’s degrees, and organic chemistry is the largest specialty of Ph.D. graduates, claimed by about 27% of respondents. Another area many students choose is biochemistry, which attracted almost 27% of bachelor’s respondents and 13% of Ph.D. graduates. Chemical engineering was also highly ranked, with 11% of bachelor’s degrees being awarded in that field and nearly 15% of doctorates.

The choice of specialty among undergraduates may also play a part in the decision to pursue graduate work, and the ACS survey found that about half of those receiving bachelor’s degrees decide to pursue advanced studies. In 2009, 47% of men receiving bachelor’s degrees went to graduate school full time, as did 45% of women. The percentages of men and women continuing in school full time after a master’s degree were 33% and 26%, respectively. These percentages are up about 10% from 2008; the rise may be in response to the difficulty in finding employment during the prolonged recession.

Most of the graduates deciding to go for further studies selected the chemistry professions. The ACS survey found that 32% of those with bachelor’s degrees and 67% of those with master’s degrees who chose to continue their studies did so in chemistry. About 8% of bachelor’s and 11% of master’s students opted for engineering, mostly chemical or biochemical. Bachelor’s graduates also switched to the health field, with 24% of them pursuing medical degrees. A small number—about 8%—of bachelor’s degree recipients indicated that they went into advanced studies in other fields such as education, law, or business.

If they did not choose to go to graduate school, graduates found themselves struggling in the difficult job market. Most graduates, regardless of degree level, looked for jobs using one of three methods. The most common method was to look for positions through electronic media job sites, and the number two method was to use the resources of formal placement services. The third most frequent way for chemists to look for a job was through informal channels.

The jobs that respondents get tend to be at universities. The survey found that, in 2009, 45% of employed graduates with bachelor’s degrees held jobs in academia, along with 48% of master’s degree holders and 55% of new graduates with Ph.D.s. The chemical industry—not including drug companies—hired 17% of bachelor’s graduates, 19% of master’s holders, and 15% of new doctorates. The pharmaceutical industry took about 5% of graduates from all levels. About 10% of graduates from all categories landed jobs with the government.

As in previous years, the 2009 survey found that Ph.D. graduates were quite satisfied with their jobs: More than 90% responded that their jobs were challenging and related to their field. But interestingly, 21% of new doctorates replied to the survey by saying that their jobs were not what they expected when they began their studies.

Respondents with bachelor’s and master’s degrees were slightly less enthusiastic about their positions, with 72% and 84%, respectively, responding that they found their jobs challenging.

Although the 2009 survey shows glimpses of positive data, such as an apparently strong jump in starting salaries for master’s degree holders and a slight increase in the number of women attending graduate school versus 2008, the overall tenor of the survey for 2009 was that employment of respondents and their starting salaries are falling. Employment rates for bachelor’s and master’s degree recipients were the lowest in a decade in 2009, and the stubbornly high national unemployment rate offers no indication that employment of chemists has improved since then. Both salaries and job prospects for Ph.D. graduates have been erratic in recent years, an indication of how volatile the economy has become.

Data for those who have graduated since this survey also are likely to show downward trends, as layoffs of scientists in the pharmaceutical industry, in particular, have continued. Although government stimulus money for the past two years has provided extra funds for university graduate programs that may have allowed the number of grad students and postdocs to increase, the loss of that money this year may jeopardize those increases.