Persistent Pollutants: Certain uses of pesticide can continue until 2017

[+]Enlarge
Credit: Newscom
Protesters in the Philippines expressed their support for a global endosulfan ban while negotiations took place in Geneva. 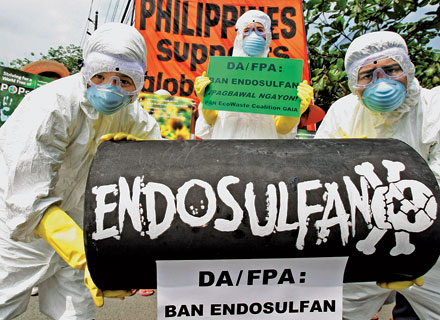 Credit: Newscom
Protesters in the Philippines expressed their support for a global endosulfan ban while negotiations took place in Geneva.

Countries have agreed to a global phaseout of endosulfan, an environmentally persistent pesticide that can cause neurological and reproductive problems in people and wildlife.

More than 120 nations struck the deal on April 29 under the Stockholm Convention, an international treaty for controlling persistent organic pollutants. They endorsed the endosulfan ban after five days of negotiations in Geneva.

Under the deal, most uses of endosulfan will cease in 2012. However, this organochlorine insecticide may be used on certain combinations of crops and pests until 2017. For example, endosulfan can continue to be used on cotton to control bollworms.

Some 18,000 to 20,000 tons of endosulfan are produced each year, according to the United Nations. India makes about 10,000 tons; China manufacturers some 5,000 tons; and Israel, Brazil, and South Korea produce the rest. The biggest users of this pesticide are India, Brazil, and China, with Argentina and the U.S. also consuming significant quantities. The chemical is used mainly on cotton, coffee, and tea, the UN says.

During the talks in Geneva, Indian officials fought hard against the phaseout. The Indian government owns Hindustan Insecticides Ltd., which manufactures endosulfan. When other governments agreed to exemptions for certain uses, India signed on to the ban.

"With a plethora of alternatives already available, we'd have preferred to see no exemptions included in the decision," says Karl Tupper, a staff scientist with Pesticide Action Network North America, a group that lobbies for alternatives to hazardous pesticides. But the detailed list of acceptable crop-pest combinations means that during the phaseout, endosulfan can only be used in specific situations, Tupper adds.

Currently, 80 countries have banned endosulfan or announced that they would phase out use of the chemical, according to Pesticide Action Network.

The U.S. Environmental Protection Agency announced last year that domestic use of endosulfan would end by 2016. However, the U.S. is not a partner in the Stockholm Convention, though it participated in the negotiations in Geneva as an observer.

Persistent Pollutants
Goodbye to some PFAS in food packaging
Pollution
Satellites can now see air pollution inequality within cities
Pollution
Mercury makes it deep into marine trenches
Share X
To send an e-mail to multiple recipients, separate e-mail addresses with a comma, semicolon, or both.
Title: Endosulfan Banned Worldwide
Author: Cheryl Hogue
Chemical & Engineering News will not share your email address with any other person or company.