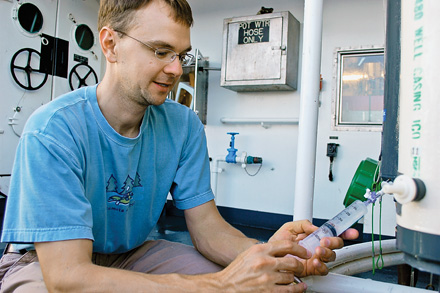 It took a little while for methanotrophic bacteria to gear up to consume methane spilled along with the oil after BP’s Deepwater Horizon rig exploded in the Gulf of Mexico last year. But once the bacteria got started, they made quick work of the job, reports a group led by John D. Kessler of Texas A&M University and David L. Valentine of the University of California, Santa Barbara (Science, DOI: 10.1126/science.1199697). Methane was the single most abundant hydrocarbon released in the oil spill. Based on CH4 concentrations and oxidation rates measured around the wellhead last June, the researchers expected that the CH4 would remain in the water for years. When the group returned to the Gulf at the end of August, however, CH4 concentrations had dropped to ambient levels. The researchers found a microbial community that included 5–36% methanotrophic bacteria, which were not detected in earlier microbial assays. They also found low concentrations of dissolved O2, which would have been used up as the microbes oxidized CH4 to CO2. Large, natural CH4 releases in the geologic past may have been at least partially consumed by a similar bacterial response, the researchers suggest.

[+]Enlarge
Credit: David Valentine
An array of water-collection bottles is recovered from the Gulf of Mexico after the BP oil spill.

Pollution
Measuring microplastics in seafood
Persistent Pollutants
US FDA sets voluntary arsenic limit in infant rice cereal
Persistent Pollutants
Goodbye to some PFAS in food packaging
Share X
To send an e-mail to multiple recipients, separate e-mail addresses with a comma, semicolon, or both.
Title: Oil-Leak Methane Consumed By Bacteria
Author: Jyllian N. Kemsley
Chemical & Engineering News will not share your email address with any other person or company.