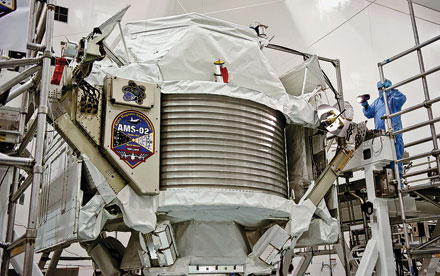 When the space shuttle Endeavour took off last week on its last flight and the shuttle program’s penultimate mission, it was carrying a novel cosmic ray detector to the International Space Station. The Alpha Magnetic Spectrometer-02 (AMS) and other supplies will increase the research capabilities of the station. Designed to track, but not capture, cosmic rays, AMS is a 2-ton ring of powerful magnets and ultrasensitive detectors. Scientists, who will control the instrument from Earth, hope to detect material—such as dark matter and antimatter—that is not visible by current methods. AMS will be attached outside the space station and is built to function as long as the station is operational. NASA’s space shuttle team deserves “tremendous credit for their accomplishments and their continued commitment to the success of the program, which has pushed the boundaries of science, space exploration, and engineering,” House of Representatives Science, Space & Technology Committee Chairman Ralph M. Hall (R-Texas) said in a statement.

Persistent Pollutants
US FDA sets voluntary arsenic limit in infant rice cereal
Pollution
Satellites can now see air pollution inequality within cities
Persistent Pollutants
Goodbye to some PFAS in food packaging
Share X
To send an e-mail to multiple recipients, separate e-mail addresses with a comma, semicolon, or both.
Title: Cosmic Ray Detector Gets To Space Station
Author: Susan R. Morrissey
Chemical & Engineering News will not share your email address with any other person or company.