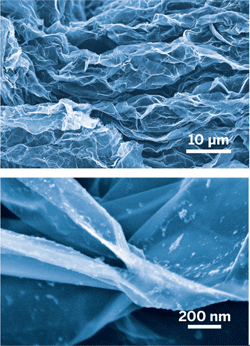 Credit: Kian Ping Loh/National U of Singapore
A simple electrochemical method exfoliates graphite into the few-layer graphene sheets seen in these SEM images.

By drawing on lessons learned from failed lithium-ion batteries, chemists in Singapore have developed a high-yield method for preparing graphene flakes (J. Am. Chem. Soc., DOI: 10.1021/ja203725d). The procedure exploits the mechanism that underlies detrimental electrode swelling during battery charging. It may hasten development of applications based on electrically conducting graphene inks and coatings.

Strictly speaking, graphene refers to single-atom-layer sheets of sp2-hybridized carbon. Some researchers use that pristine form—painstakingly prepared via vapor deposition or other methods—for microelectronics applications.

Researchers aiming for applications in energy storage, advanced composites, conductive films, and other areas, however, rely on solution-phase and colloid methods to prepare graphene flakes that are a few layers thick. This low-cost material is typically prepared by exfoliating graphite with strong acids, which yields a high-surface-area product that consists of defective oxidized crystallites. Chemical or thermal treatments partially reduce that material and render it electrically conducting.

Now, by tuning the parameters that lead to unwanted gradual swelling of graphite electrodes in lithium-ion batteries, National University of Singapore chemists Junzhong Wang, Kian Ping Loh, and coworkers have just developed an electrochemical route to few-layer graphene flakes. In contrast to the acid method, this route is direct and nonoxidizing.

Specifically, the team charged a graphite electrode in an electrolyte solution of lithium salts and propylene carbonate at relatively high voltage (around 15 V) and then sonicated the product. The process forces lithium ions and solvent decomposition products to quickly intercalate into graphite and exert enough force to exfoliate the material. In proof-of-concept tests, the group showed that graphene “ink” prepared by this method can be used to make electrically conducting paper.

“This is an interesting route to a carbon-pure, few-layer graphene material derived from graphite that might lead to other materials and interesting applications, including electrical energy storage,” says Rodney S. Ruoff, a graphene pioneer and professor at the University of Texas, Austin. The method also appears to be scalable, Ruoff adds, noting that large graphite electrodes are used routinely in industrial processes.