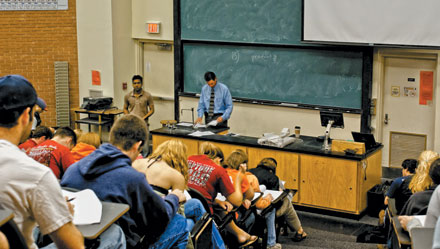 Credit: Frances Miller/Clemson U
Changing demographics in college classrooms is one reason the U.S. needs new science and innovation policies.

The U.S. must improve its performance in science and technology innovation in order to retain its leadership role in the world economy. This message has been delivered by President Barack Obama in several speeches, and it has been the focus of major analyses, such as the National Academies’ 2007 report “Rising Above the Gathering Storm.”

This need for improvement was also raised throughout the two-day Forum on Science & Technology Policy, conducted earlier this month by the American Association for the Advancement of Science. The annual forum attracts many of Washington’s science policy leaders to discuss new directions of their field; this year it included a variety of panel discussions ranging from the bleak outlook for the fiscal 2012 federal research and development budget to the government’s efforts to develop policies on scientific integrity. And the need for a national innovation strategy came up in several sessions.

One thread of these discussions is that science and technology has become increasingly international over the past decades, yet U.S. policies have stayed the same. Change is needed to make sure the nation remains an important part of the international picture. Other issues raised include the changing demographics in the U.S. and increased global competition to spur economic growth through innovation.

U.S. policies may have been static, but its demographics have been undergoing significant change, said Robert M. Groves, director of the U.S. Census Bureau. He told attendees that demographic shifts are “changing the America that U.S. science inhabits.” Specifically, he cited census data indicating growth in the numbers of Asians and Hispanics in the U.S. over the next decade and stated that the choices these groups make in areas such as graduate education and where they live could impact science and technology. “This new population will look at the future with different lenses than we are [using] today, and they will see science and the solutions to problems differently.”

A demographic shift universities are seeing is in the nationality of its graduate students. “At Brandeis, about 70% of our graduate students are foreign nationals,” Catherine L. Mann, professor of global finance at the International Business School of Brandeis University, told forum attendees. “Effective communication of the foundations of science and technology to this broader population is a critical component in making our society successful in the global economy.

“The burgeoning diversity noted in the demographics can be an important source of strength,” Mann contended. She pointed out that U.S. exports have been rising, mostly to developing nations in Asia and in Latin America. “The challenge is to translate innovation into exporting more products to more markets.”

Other speakers at the forum described institutional problems that are holding back successful U.S. innovation. Robert D. Atkinson, president of the Information Technology & Innovation Foundation, told the audience that most of the nations in the world have developed formal innovation strategies to guide their technological development. The U.S. has not. “The decline of the U.S. economy is related to the failure of the U.S. competitive system over the past decade,” he claimed.

A national science and innovation policy should incorporate not just basic research and technology, but also commercialization strategies; tax and trade policies; and education, immigration, and regulatory policies, Atkinson said. “Other nations are doing these things because they understand that they are in economic competition with the world,” Atkinson said. “The U.S. does not seem to understand this.”

Although the U.S. lacks a national innovation policy, Richard Bendis, president and chief executive officer of the consulting firm Innovation America, explained that some federal programs are helping commercialize innovations, but they do not have great support in Congress. Among them are the Small Business Innovation Research and Small Business Technology Transfer programs, both of which are currently up for reauthorization in Congress. Bendis also cited the Technology Innovation Program at the National Institute of Standards & Technology as being very good but underfunded.

Another recent program that helps innovation is the i6 Challenge from the Department of Commerce that sets up regional proof-of-concept centers to bring together inventors and capital investors (C&EN, April 4, page 29). “The new paradigm shift is for more relevance in supported research and to move beyond that to proving that a product is commercial,” Bendis said.

An increasing number of states and regions are getting the message that they have to create an environment that nurtures innovation so they can compete for new and relocating enterprises; they also need to support the commercialization of research products. Bendis cited a number of states—such as Iowa, Utah, Oklahoma, and Kansas—that are moving beyond just supporting basic research and are giving more support to the proof of commercial relevance of potential products.

To support innovation, Bendis recommends much closer collaborations among research universities, industry, and government. “Major research universities are the primary drivers of the future economy and job growth, mostly through science and engineering,” he said. “Global economic competitiveness requires the confluence of scientific discovery and the enabling resources of government and industry.”

Universities have an important role to play in encouraging faculty to look at developing products from their research. “University support and rewards for faculty must more effectively [bolster] the strategies and goals of technology innovations,” he said.

But universities must be careful not to tie researchers’ hands as they look increasingly to industry to bridge the support gap being created by limited federal funds. In a panel on research universities, concern about the erosion of academic freedom by such research was raised by Tobin Smith, vice president for policy with the Association of American Universities. “In our haste to find easy solutions, we may make decisions that put our future at risk,” Smith said. “We need to be careful not to fund projects that are based on what we expect from short-term outcomes. And we need to keep research protected from political pressures.”

A factor not often mentioned with innovation, but raised during the forum, is the role of federal regulations. Both Atkinson and Bendis referred to regulations as a necessary part of a national innovation policy. But Michael Mandel, from the Wharton School of the University of Pennsylvania, put forth the idea that technological innovation and regulation are enemies.

Regulatory schemes that require companies to go through an ever-increasing number of hoops in order to manufacture new products are stifling innovation, Mandel contended. He cited the growing number of regulations in the U.S. and compared it with falling productivity by industry, especially the heavily regulated pharmaceutical industry. “There are large pieces of the government where innovation is not a plus but a minus,” he said. The result, he said, is that the amount of resources going into testing products to meet regulatory requirements has increased dramatically in recent years.

The number of speakers at the forum addressing the globalization of research, technology, and innovation made it clear that this is a topic that federal policymakers need to address. The traditional separation of federally funded research and product commercialization no longer exists. Researchers, entrepreneurs, and others in the commercialization process need to work together to speed up getting new products to the market. As David M. Hart, George Mason University economics professor, stated at the forum: “The 20th century was a world of vertical integrations. Now we are in a world of networks. It’s time to get going.”

Policy
Shifting R&D Landscape
Policy
U.S. Competitiveness In Research And Development Continues To Erode
Careers
Universities Are Vital To U.S. Innovation
Share X
To send an e-mail to multiple recipients, separate e-mail addresses with a comma, semicolon, or both.
Title: Innovation Policy Urged For U.S.
Author: David J. Hanson
Chemical & Engineering News will not share your email address with any other person or company.