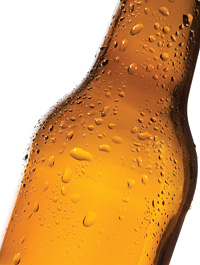 I raise my glass high and toast the scientists at the Technical University of Munich who have pointed the way to keeping beer tasting fresher longer.

Unlike wine, which often improves with age, beer deteriorates when it sits around in storage for as little as six months. Young beer has a heady and yeasty aroma accompanied by a tangy, almost bitter, taste. Old beer has an unpleasant, decidedly BITTER  AFTERTASTE.

To figure out why, Thomas Hofmann and Daniel Intelmann identified the compounds that make beer especially bitter if it sits around too long. They published their results last year in the Journal of Agricultural & Food Chemistry (DOI: 10.1021/jf100083e).

Freshly brewed beer gets its characteristic tang from cis- and trans-configured iso‑α-acids, which form when hops are added in the brewing process. But when oxidation of the cis- and trans-iso-α-acids occurs as beer sits in storage, the flavor quickly goes down the drain.

All told, the scientists identified 16 substances in beer that contribute to its bitter taste. Hydroperoxy- and hydroxyl-allo-iso-α-acids were the primary offenders. And the scientists discovered that beer in oxygen-permeable polyethylene terephthalate bottles deteriorates more quickly than beer stored in glass bottles.

The worst thing I’ve done when brewing my own beer is to make a flat batch. The disappointment is almost as great as playing with a “flat” chemistry set that contains no chemicals. Newscripts recently described such a set, called the Chemistry 60, from Elenco Electronics (C&EN, Feb. 28, page 72).

Reader Cliff Myers, a professor of chemistry at Berkshire Community College, in Pittsfield, Mass., recalls that in the early 1950s, he received a similarly disappointing whiz-bang top-of-the-line Gilbert chemistry set from his grandmother. The chemicals it contained were so innocuous they might as well not have been there at all, Myers says.

So what did he do? He improvised. “An old friend let me in on the ULTIMATE SCERET OF THE UNIVERSE,” he writes. “You could actually buy real chemicals at the local drug store! They were evil-smelling, daring in name, and wondrous in action!”

Using some of his store-bought chemicals, such as saltpeter and flowers of sulfur, he and a companion, who brought along some aluminum tubing, succeeded in launching a rocket that landed, “still burning, on the porch of a neighbor who was, coincidentally, a justice of the peace,” Myers says.

Fortunately, the judge was away from home, but Myers learned a valuable lesson: Stuff happens during the development stage of any project. 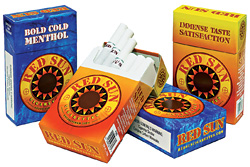 Another experiment worth watching is Goodrich Tobacco’s plan to “put the fun back into smoking” with the introduction of high-nicotine RED SUN CIGARETTES. Goodrich Tobacco is a subsidiary of 22nd Century Ltd., which says it is a plant biotechnology company based in Williamsville, N.Y. 22nd Century claims it specializes in manipulating levels of nicotine in tobacco “through genetic engineering and breeding.”

Red Sun “was developed for adults who are expressly unapologetic about smoking,” says Henry Sicignano III, president of Goodrich. In contrast, 22nd Century also plans to offer X-22, a cigarette that the firm says contains very low nicotine levels. The firm expects sales of X-22, now in Phase II clinical trials, to begin in June as a “prescription smoking cessation aid,” meant, I’d say, to take the fun out of smoking.