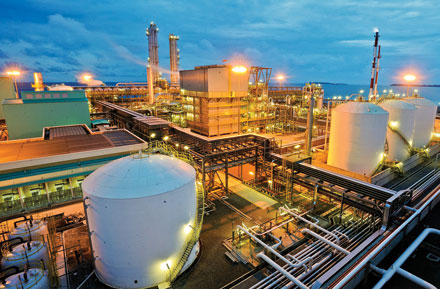 Malaysian state-owned oil refiner Petronas plans to build a $20 billion oil refinery and petrochemical complex in the state of Johor. And Saudi Basic Industries Corp. (SABIC) is going ahead with a polycarbonate investment in China and a large rubber project on its home base in Saudi Arabia.

Petronas says its refinery will have a processing capacity of 300,000 barrels per day. Its petrochemical complex will crack naphtha to annually produce 3 million metric tons of ethylene, propylene, and other olefins. A Petronas spokesman tells C&EN that the project, to be commissioned in 2016, is still in the early stages and that more details will come later.

Although Malaysia is an oil and gas producer, the crude oil for the refinery will likely be imported from the Middle East, says Samuel Liew, an Asia-region olefins and elastomers analyst at the consulting firm Chemical Market Associates Inc. (CMAI). The type of oil Malaysia produces is most suitable for the export market, he notes.

Petronas says it will seek foreign partners for additional plants making downstream polymers and “highly specialized chemicals.” One obvious candidate is BASF, which in December announced a feasibility study with Petronas for a $1.3 billion investment in specialty chemicals. The two are already partners in a facility in Kuantan, Malaysia, that makes acrylic acid, oxo alcohol, and other chemicals.

Beyond BASF, Liew sees no obvious partner candidates. He notes that Dow Chemical is well established in neighboring Thailand and therefore unlikely to spread itself into Malaysia. And last September, BP exited Malaysia’s chemical sector by selling its stake in two ventures to Petronas.

Meanwhile, SABIC is moving forward with a pair of projects in China and Saudi Arabia that it has been studying for years.

In China, the company will build a 260,000-metric-ton-per-year polycarbonate plant with partner Sinopec. The companies will build the facility in Tianjin, where last year they completed a petrochemical complex that makes ethylene, polyethylene, ethylene glycol, polypropylene, butadiene, phenol, and 1-butene.

SABIC and Sinopec have been mulling the polycarbonate unit since 2008, soon after SABIC got into the business by acquiring GE Plastics. At the time, they upped their estimate of the complex’ cost from $1.7 billion to $2.5 billion to include the polycarbonate plant. They expect to complete the unit in 2015.

At a recent petrochemical conference in Houston, Adrian Beale, director of global engineering resins at CMAI, forecast that the 3.4 million-metric-ton-per-year market for polycarbonate will grow at 5.6% annually.

In Saudi Arabia, SABIC and ExxonMobil Chemical have awarded engineering contracts for a joint-venture synthetic rubber complex they are planning for Al-Jubail. The complex will be able to produce annually more than 400,000 metric tons of several synthetic rubbers as well as carbon black. The facilities will be located near an existing petrochemical joint venture, known as Kemya, between the two firms.