New investments, alliances are signs of life for biobased chemicals 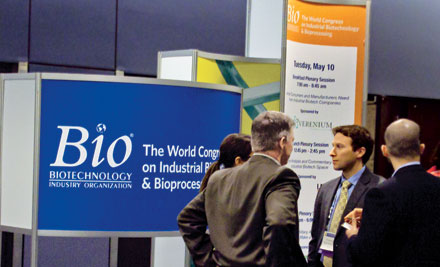 The past three years have been tough for industrial biotechnology companies. Biomass-derived fuels and chemicals that were attractive in mid-2008 when oil cost $145 per barrel looked decidedly blemished when oil prices dropped below $50 per bbl. The venture capital that had flowed so freely prerecession was suddenly hard to come by.

But the company executives who traveled to Toronto earlier this month were in a good mood about their industry’s future. Their spirits were buoyed by economic recovery, rebounding oil prices, and a flurry of positive news. And when they arrived, they were greeted by two more encouraging announcements.

The executives were in town for the Biotechnology Industry Organization’s annual World Congress on Industrial Biotechnology & Bioprocessing. The conference, which has rotated between Canada and the U.S. in recent years, attracted more than 1,000 delegates from across the globe.

One opening-day announcement was about plans by DSM and Roquette to build what the partners are calling Europe’s first commercial-scale plant to make succinic acid from renewable raw materials. The 10,000-metric-ton-per-year fermentation facility is expected to open at Roquette’s site in Cassano Spinola, Italy, in the second half of 2012 (C&EN, May 16, page 9).

In addition, the U.S. firm Verdezyne, which is developing biobased production of adipic acid, announced that it raised a new round of investment capital. Although the company did not disclose the amount, it said the venture capital arms of two blue-chip firms, DSM and BP, put up the cash.

Those new developments followed a recent spate of joint-venture, construction, and investment announcements. Together, the deals signal that the industrial biotech industry is back on a growth path. And unlike in the past, when biotech fuels were the industry darlings, it’s the chemical sector that’s attracting the attention of investors.

Investment bankers and venture capitalists at the conference cautioned that the financing market is still anemic. “Everyone knows how difficult the investment climate is right now,” said John M. May, managing director of the investment banking firm Stern Brothers & Co., during a panel discussion on financing industrial biotech. “It’s challenging to raise capital for biotech and cleantech projects.”

Kef Kasdin, a general partner at Battelle Ventures, was a little more optimistic. She pointed to the recent initial public offerings of stock in the biobased chemical companies Amyris and Gevo as evidence that investor sentiment is changing. IPOs, Kasdin explained, reassure venture capitalists that they have a chance of one day making a return on their investments in new companies. “I think we’re seeing light at the end of the tunnel,” she said.

One company investors are favoring these days is Genomatica, which announced in March that it had raised $45 million. The cash infusion brought Genomatica’s fund-raising total to $84 million.

Moreover, since raising the funds, Genomatica has struck three deals to develop its first product, a biobased version of 1,4-butanediol, or BDO. It signed an agreement with the corn refiner Tate & Lyle to demonstrate its BDO fermentation process at a corn refinery in Decatur, Ill. It inked a pact with plastics maker Mossi & Ghisolfi to test making BDO from cellulose-derived sugars in Italy. And it agreed to study an Asian BDO plant with Japan’s Mitsubishi Chemical, which is also an investor in the recent fund-raising round.

Not surprisingly, Christophe Schilling, Genomatica’s chief executive officer, is bullish on industrial biotech. In his view, projects succeed on the basis of their fundamentals rather than on the investment climate at any given time. “If you’ve got a compelling story, you’ll be able to raise capital in most any market conditions,” Schilling said.

At the same time, he’s encouraged by the growing involvement of “brand name” chemical companies in industrial biotech. Whereas firms such as DSM and DuPont embraced the technology some time ago, more traditional companies such as Mitsubishi Chemical, Lanxess, and Dow Chemical are now starting to get active.

“We’re seeing companies come and talk more about industrial biotech as a meaningful part of their strategies,” he observed, “and not just so they can check the box off.”

Last month, another start-up firm, OPX Biotechnologies, linked up with Dow, one of the biggest brand names in chemicals. The two firms are collaborating to develop an industrial-scale process for renewable acrylic acid, made via the fermentation-derived intermediate 3-hydroxypropionic acid.

The deal is notable given Dow’s skittishness about biobased chemicals. In 2008, the company pulled out of NatureWorks, a joint venture with Cargill to make a lactic acid-based polymer from corn. Afterward, CEO Andrew N. Liveris told analysts that customers are not willing to pay more for environmentally friendly products.

But OPX CEO Charles R. Eggert insisted high prices will not be a problem for Dow this time. His firm’s February disclosure of pilot-scale results, he pointed out, demonstrates that the company should be able to make acrylic acid commercially for less than the cost of petroleum-based acrylic.

OPX isn’t the only company pursuing renewable acrylic acid, Eggert acknowledged. He ticked off a fermentation partnership between Cargill and Novozymes; Arkema and Nippon Shokubai, which want to derive acrylic acid from glycerin; and Metabolix, which is looking to thermally decompose its corn-based polyhydroxyalkanoate into acrylic acid.

But OPX is on target to be first to market, Eggert said. With Dow, it will optimize the fermentation and chemical conversion steps on a large demonstration scale. Eggert is now in the midst of raising $35 million to pay for his firm’s share of that project.

Likewise, DSM and Roquette face competition in biobased succinic acid. Myriant Technologies plans to build a 15,000-ton succinic acid plant in Louisiana by 2012 with the help of $50 million in Department of Energy funding. And at the conference, BioAmber, flush with $45 million from a just-completed fund-raising round, stated its intention to produce succinic acid in North America by 2013 and in Thailand by 2015.

In addition to improved investor and big-company interest, structural changes in the U.S. petrochemical industry are encouraging renewable chemical developers. Ethylene producers are shifting their feedstock slates toward low-cost shale-derived ethane. In the process, they are turning out fewer of the coproducts that come with petroleum-based raw materials.

In particular, there’s less of the three-carbon propylene needed to generate acrylic acid and fewer of the four-carbon molecules used to make BDO, company executives at the conference pointed out.

Output of isoprene, a five-carbon component of synthetic rubber, is similarly being squeezed, explained Tjerk de Ruiter, CEO of the enzymes powerhouse Genencor. Meanwhile, demand for natural rubber is outpacing what rubber plantations can produce. This confluence of trends makes de Ruiter optimistic about his firm’s alliance with Goodyear Tire & Rubber to develop bioisoprene via a Genencor fermentation process. “Our thinking is we’ve reached a cap on availability of isoprene,” he said.

Genencor is one of the pioneers in biobased chemicals. Its development with DuPont of a biobased route to 1,3-propanediol stands as one of the industry’s seminal achievements. DuPont went on to open a $100 million propanediol plant in Tennessee in 2006; next month it will complete a 35% expansion there.

Last week, Genencor became part of DuPont following the completion of DuPont’s $6.3 billion acquisition of Danisco, Genencor’s parent company. For biobased chemicals, de Ruiter said, that transaction may be the biggest sign of confidence of all.