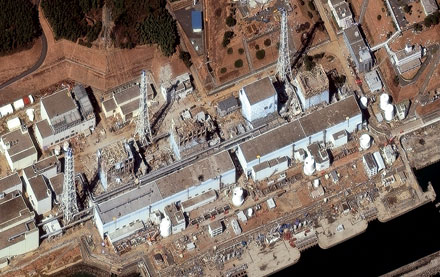 As the crisis at Japan’s crippled Fukushima Daiichi Nuclear Power Station continues to unfold, governments around the world have begun to review their nuclear energy policies.

Germany has already shut down its seven oldest reactors for safety checks. China has suspended all new approvals of nuclear plants while it reviews safety standards. And the European Union is calling for “stress tests” at all 143 nuclear facilities on the continent. Meanwhile, Japan has dropped plans to double its nuclear power capacity and will instead focus its long-term energy policy on the development of wind, solar, and other renewable sources (see page 8).

In the U.S., President Barack Obama has called on regulators to conduct a comprehensive review of the safety of the 104 commercial nuclear reactors operating at 65 plants spread across country. But the White House has been steadfast in its support for expanded nuclear power generation.

Nuclear power is an important component of the President’s proposal for a clean energy standard. The plan would require utilities to generate part of their electricity from sources that are low in greenhouse gas emissions. Nuclear power already supplies 20% of the country’s electricity and 70% of its low-carbon power.

“When we see a crisis like the one in Japan, we have a responsibility to learn from this event, and to draw from those lessons to ensure the safety and security of our people,” Obama said in remarks at the White House in mid-March. But he added that nuclear power remains “an important part of our own energy future,” along with renewables, natural gas, and clean coal.

The President spoke less than a week after a 9.0 magnitude earthquake and tsunami struck Japan’s northeast coast on March 11, leading to the worst nuclear crisis since the accident at Chernobyl in 1986. The natural disaster destroyed power lines and flooded diesel generators at the Fukushima plant, shutting down its cooling systems. Fuel rods overheated, triggering fires, explosions, and radiation leaks.

Tokyo Electric Power, the operator of the nuclear facility, has said it could take up to nine months to stabilize the damaged six-reactor complex. Japanese engineers are now working to place enclosures over the reactors, improve ventilation, restore the damaged cooling systems, and contain the radioactive releases.

In the U.S., antinuclear activists have urged President Obama to impose a moratorium on the relicensing of existing nuclear plants and to move away from nuclear power as a major source of America’s energy. “The crisis in Japan is a sobering reminder that nuclear power is inherently dangerous,” says Gary Kalman, federal legislative office director of the U.S. Public Interest Research Group. “There are no guarantees that an accident of the type happening in Japan couldn’t happen here in the U.S.”

The U.S. Nuclear Regulatory Commission (NRC) says there is no need for a time-out. But the independent federal agency has launched a two-step review of U.S. reactor safety. A 90-day review will wrap up in July, and a more in-depth evaluation of emergency operations and procedures is expected to be completed by the end of the year.

The short-term analysis will identify whether any extra safeguards are needed immediately at U.S. facilities, says NRC Chairman Gregory B. Jaczko. The longer term review will include a study of the lessons that can be learned from the catastrophic events in Japan.

“Our focus is always on ensuring the health and safety of the American people through our licensing and oversight of plants and radioactive materials in this country,” Jaczko says. “Examining all the available information from Japan is essential to understanding the event’s implications for the U.S.”

In a progress report issued during an NRC meeting on May 12, officials said some safety lapses were found during the initial inspections, but the problems have been resolved. “As we stand today, the task force has not identified any issues that we think would undermine our confidence in the continued safety and emergency planning for nuclear plants in this country,” said Charles L. Miller, who oversees environmental management and other programs for NRC and is leading the 90-day review.

Industry officials say their facilities are constructed to withstand a variety of natural disasters. “We’ll be even better prepared as we address the lessons learned from Japan,” says Marvin S. Fertel, president and chief executive officer at the Nuclear Energy Institute, an industry lobbying group.

In remarks at the organization’s annual meeting in Washington, D.C., on May 10, Fertel said nuclear plant operators in the U.S. took prompt action at the outset of the Japanese crisis to verify their facilities’ readiness to maintain safety even in the face of extreme events. “We certainly must and will continue to learn from Japan, but we have a responsibility to keep moving forward and deliver safe, reliable electricity to meet America’s growing demand,” he declared.

Fertel said the industry expects that as many as eight new reactors will come on-line in the U.S. between 2016 and 2020. “We do not expect the accident at Fukushima to have a major impact on new nuclear plant licensing,” he said. The industry official added that the crisis will not delay NRC’s approval of license renewal applications for existing reactors either.

So far, the commission has approved 20-year renewals of operating licenses for 66 reactors, including four since the disaster in Japan. NRC is now reviewing renewal applications for 16 reactors and is expecting to receive applications for 20 more reactors by 2017, Fertel said.

Obama Administration officials have sought to allay fears that small releases of radiation from the Japanese plant are a threat to the U.S. Given the thousands of miles between the two countries, Hawaii, Alaska, and the U.S. West Coast are not expected to experience any harmful levels of radioactivity, federal authorities have stated repeatedly.

The U.S. Environmental Protection Agency says a range of radioactive particles have been detected in milk, water, and air samples taken across the U.S. since the accident in Japan. But the levels have “been very low, are well below any level of public health concern, and continue to decrease over time,” EPA said in a statement on May 3.

Officials have also downplayed the risk of a similar crisis occurring at a U.S. nuclear facility, citing a stringent regulatory program, redundant safety systems, and improvements made since the 1979 partial meltdown of one reactor at the Three Mile Island power plant near Harrisburg, Pa.

“We have taken advantage of the lessons learned from previous operating experience to implement a program of continuous improvement for the U.S. reactor fleet,” says R. William Borchardt, NRC’s executive director for operations. The commission, he says, has “a high degree of confidence” that nuclear plants in the U.S. are being operated safely and have the ability to withstand earthquakes, tornadoes, hurricanes, floods, and tsunamis.

UNDER REVIEW
[+]Enlarge
Credit: Shutterstock
The San Onofre Nuclear Generating Station sits on a beach in a seismically active area of Southern California.

Credit: Shutterstock
The San Onofre Nuclear Generating Station sits on a beach in a seismically active area of Southern California.

U.S. nuclear plants are built to withstand the “maximum credible” natural disasters for their location, NRC says in a fact sheet. Japan’s earthquake occurred in a “subduction zone,” the type of tectonic region that produces quakes of the largest magnitude. Such quakes can set off the kind of massive tsunami seen in Japan.

The U.S. has one subduction zone, a 680-mile-long fault that runs 50 miles off the coast of the Pacific Northwest. The Columbia Generating Station near Richland, Wash., is the only nuclear plant near this zone. But its location, 225 miles from the coast, precludes the possibility of a tsunami affecting the facility, according to NRC.

Earthquake-prone Southern California has two nuclear power plants. The Diablo Canyon Power Plant in San Luis Obispo County is located right on the Pacific coast, and the San Onofre Nuclear Generating Station in San Diego County, is similarly built on the ocean’s edge. But experts say they are located near strike-slip faults that are not capable of producing the kind of giant quake that struck Japan and caused the devastating tsunami.

Sen. Barbara Boxer (D-Calif.), chairman of the Senate Environment & Public Works Committee, acknowledged at a hearing last month that it’s unlikely California will ever experience a catastrophic earthquake and tsunami like the one that struck Japan. Still, she said, regulators and lawmakers must ensure nuclear power plants can withstand worst-case scenarios.

Before the crisis in Japan, Boxer noted that officials there said “this could never happen” and touted nuclear power. “The situation in Japan has shown us that we must take a hard look at the risk assumptions that were made when nuclear reactors were designed and built in the U.S.,” she remarked.

Boxer and Sen. Dianne Feinstein (D-Calif.) have urged NRC to give “special and immediate attention” to reactors that are subject to significant seismic activity or are located near a coastline, such as the Diablo Canyon and San Onofre plants.

Jaczko responded that the California facilities are “built to the highest specification in the country.” He said they would be evaluated during NRC’s 90-day review, but the commission will not do “anything specific” for the two plants.

Boxer suggested that regulatory officials are being too conservative. “I don’t think we’re humble enough in the face of what Mother Nature can do,” she remarked. “You can’t know for sure what’s going to happen.”

Sen. James M. Inhofe of Oklahoma, the committee’s ranking Republican member, observed that all energy production has some level of risk that must be managed. “We can’t be complacent with regard to nuclear safety. Even so, we can’t allow ourselves to be paralyzed by fear,” he said.

Environment
Decades For Decommissioning
Energy
Another Nuclear Plant To Close
Energy
Notes On Nuclear Energy Regulation
Share X
To send an e-mail to multiple recipients, separate e-mail addresses with a comma, semicolon, or both.
Title: U.S. Boosts Scrutiny Of Nuclear Reactors
Author: Glenn Hess
Chemical & Engineering News will not share your email address with any other person or company.