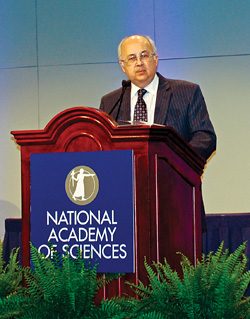 At the annual meeting of the National Academy of Sciences early this month, Ismail Serageldin received the academy’s most prestigious award, the Public Welfare Medal, which honors “extraordinary use of science for the public good.” Serageldin is the founding director of Egypt’s New Library of Alexandria.

I did not know of Serageldin but became curious after someone raved about the speech he gave at the award presentation on May 1. When I found the speech on the NAS website, I understood why: Here is a citizen of the biggest country undergoing wrenching change during the "Arab Spring" calling on the youth of the Arab world to embrace the values of science.

With permission from Serageldin, here are extended excerpts:

“Today there are those who fear that the Arab Spring will give way to the Islamist winter. … Yes, Islamist sentiment is rising, and zealotry is expanding in parts of the public realm. But the defense against extremism is not by censorship or autocracy; it is by embracing pluralism and defeating ideas with ideas.

“Science has much to say … about the kind of values that we must adopt if our societies are to be truly open and democratic. … To the Islamists, who yearn to return to their particular vision of the Muslim past, we say, there is a great Arab and Muslim tradition of science and tolerance … that must be revived if the Arab World, Muslim and non-Muslim alike, will indeed join the ranks of the advanced societies of our time. Rejecting politicized religiosity and reviving these traditions would promote the values of science in our societies. …

“[T]he enterprise of science requires the adoption of certain values: Truth, honor, teamwork, constructive subversiveness, engagement with the other, freedom, imagination, and a method for the arbitration of disputes. The values of science are adhered to by its practitioners with a rigor that shames other professions. …

“Any scientist who manufactures his data is ostracized forever from the scientific community. She or he may err in interpreting the data, but no one can accept fabrication of data. …

“Scientists reject plagiarism. To give each his or her due is essential, a sentiment well captured in Newton’s statement that … ‘if I have seen farther than most, it is because I have stood on the shoulders of giants.’

“Teamwork has become essential in most fields of science. And the essence of teamwork is to ensure that all the members of the team receive the recognition that they deserve.

“Science advances by overthrowing the existing paradigm, or at least significantly expanding or modifying it. Thus there is a certain constructive subversiveness built into the scientific enterprise, as a new generation of scientists makes its own contribution. … [C]onstant renewal and advancement … requires tolerant engagement with the contrarian view, accepting to arbitrate disputes by the rules of evidence and rationality.

“Science requires freedom: Freedom to enquire, to challenge, to think, to imagine the unimagined. It cannot function within the arbitrary limits of convention, nor can it flourish if it is forced to shy away from challenging the accepted.

“The content of scientific work is what is discussed, not the person who produced it, regardless of their nationality or the color of their skin or the god they choose to worship or the ethnic group they were born into or their gender. These are societal values worth defending, not just to promote the pursuit of science, but to have a better and more humane society. These are the central core of universal values that any truly modern society must possess. …”

Well said, Dr. Serageldin. Thank you for reminding us of the preciousness of the values we sometimes take for granted.

Policy
Taking Care On Taking Positions
Environment
Building The Future
Policy
We’re All Americans!
Share X
To send an e-mail to multiple recipients, separate e-mail addresses with a comma, semicolon, or both.
Title: Values Worth Defending
Author: A. Maureen Rouhi
Chemical & Engineering News will not share your email address with any other person or company.