UP IN SMOKE
[+]Enlarge
Credit: Shutterstock
Lawmakers want information about the cost and potential applications of CO2 captured from industrial sources such as coal-fired power plants. 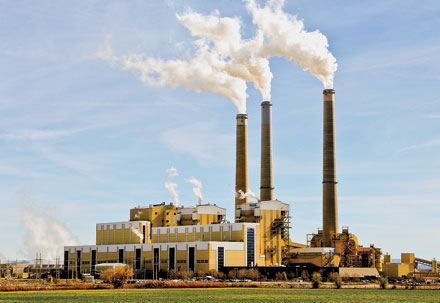 Credit: Shutterstock
Lawmakers want information about the cost and potential applications of CO2 captured from industrial sources such as coal-fired power plants.

Researchers and lawmakers alike are looking for ways to reduce the amount of carbon dioxide released into the atmosphere because of its contribution to global climate change. Work to develop feasible carbon capture and sequestration (CCS) technologies is still ongoing, and methods to turn the CO2 into a resource for other industrial applications, such as enhanced oil recovery, are years away from becoming reality. This was the less than satisfying message delivered to senators during a hearing earlier this month.

The goal of the Senate Energy & Natural Resources Committee hearing was to get feedback on a pair of CCS bills that have been reintroduced in the Senate. In discussing the legislation, the witnesses described potential uses for captured CO2 but noted that such options either are not cost-effective or are technically challenging.

Of the two bills, discussion of S. 699—an amendment to the Energy Policy Act of 2005 that would allow the Department of Energy to provide technical and financial help to 10 commercial-scale projects on integrated CCS systems—dominated the hearing. The second bill (S. 757), which garnered less interest from the senators, provides incentives to encourage the development and implementation of technology to capture significant amounts of CO2 from dilute sources using direct air capture.

A key issue for the senators was to understand the cost and purpose of commercial CCS systems. The systems covered by S. 699 are designed to capture more than 1 million tons of CO2 per year from industrial sources and then inject, monitor, and geologically store it.

Earlier in the week of the CCS hearing, the committee heard testimony from oil and gas industry executives on how they were having trouble getting CO2 for enhanced oil recovery. The industry uses CO2 and other gases to expand a reservoir and push more oil into a production wellbore. With this concern fresh in their minds, senators, including committee Chair Jeff Bingaman Jr. (D-N.M.) and Joseph Manchin III (D-W.Va.), asked why R&D endeavors to capture and sequester millions of tons of CO2 from industrial sources hadn’t considered applications of the gas in enhanced oil recovery.

Scott M. Klara, deputy director of the National Energy Technology Laboratory, explained that using CO2 captured by CCS systems is prohibitively expensive. NETL, which is the DOE lab charged with managing laboratory and field-based R&D projects on CCS, has a small portfolio of research projects that are studying the conversion of CO2 into other chemical products. But, Klara said, the stability of CO2 requires high-pressure and high-temperature processes that make the conversion of the gas into other products very expensive. Storing CO2, although also costly, is the cheaper alternative.

“Two big issues in getting the technology to go forward for CCS are cost and liability,” Sen. John H. Hoeven III (R-N.D.) noted. The liability issue is covered in the S. 699 bill, but the cost issue is still left dangling. “We’ve got to find a way to address the cost aspect where we use this CO2 in a productive way,” he said. Hoeven wasn’t buying into the use of captured CO2 in the enhanced oil recovery application because the technology is still 10 years away from being feasible. He wanted ideas of more immediate uses for the CO2 that would help offset the cost of CCS.

Klara agreed there is a need to reduce the cost of CCS technologies, but he couldn’t offer immediate suggestions. Currently, CO2 purchased for enhanced oil recovery costs between $10 and $30 per ton of gas, he said. With the best CCS technology currently available, “it will cost you $60 a ton or more,” Klara stated. He said NETL is looking into technologies to drive the costs of CO2 capture down by two-thirds so the oil and gas industry could consider using CO2 obtained by CCS in the future.

Sallie E. Greenberg, assistant director of the Illinois State Geological Survey, pointed out that the purity of the CO2—whether it is free of volatile organic compounds and other contaminants—is a critical factor in using it for chemical processing. She also said transportation infrastructure is a consideration to “get anthropogenic CO2 from locations where it is being produced to places where you’re going to be doing [enhanced oil recovery].”

Her comment caused Hoeven to push his point that unless CO2 is soon turned into a usable product, the cost for CCS will not drop. But Klara argued that even if applications, such as turning CO2 into plastics, did take off, they would hardly help drive down CCS’s cost because they would use only a small amount of captured CO2.

Manchin asked whether implementation of CCS technologies would affect the nation’s competitiveness by increasing the price of energy. If U.S. energy costs rise because of having to use CCS technology in places such as coal-powered utilities, it gives countries like India and China that have cheaper energy a competitive advantage, he stated.

Because of these concerns, Manchin asked: “Why would we lose more jobs because of our high cost of manufacturing when we don’t have the proven technology, and why should we put money” into research to develop the technology that will make the U.S. less competitive? No one had a response.