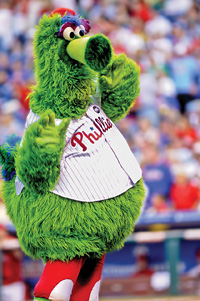 The ceremonial opening pitch of a Major League Baseball game is often the scene of disaster. Celebrities such as singer Mariah Carey and track legend Carl Lewis have become famous for flubbing that game-starting throw to home plate.

These poor performances from untrained pitchers aren’t surprising, but it does raise a few eyebrows when a robot designed for the task comes up short.

PHILLIEBOT—a contraption with three wheels, a computer brain, and a carbon-fiber-scoop arm propelled by a pressurized cylinder—pitched a ball into the dirt about 5 feet in front of home plate to start an April 20 game between the Philadelphia Phillies and the Milwaukee Brewers. The robot was created by engineering students from the University of Pennsylvania’s General Robotics, Automation, Sensing & Perception Laboratory to celebrate Science Day at the Phillies’ ballpark.

In a postgame report by KYW Newsradio, the engineering team defended their mechanical buddy, which took two months to build. All of their practice runs went smoothly, the engineers said, but they turned Phillie­Bot’s pressure down because they were warned not to hurt the Phillie Phanatic, the team’s beloved mascot, who awaited the pitch behind home plate.

To see video of PhillieBot in action, go to the Newscripts blog.

Another student-designed contraption getting attention these days is a solar-powered PICNIC TABLE on the campus of Catholic University of America, in Washington, D.C. Having installed more than 1,000 solar panels on its rooftops in 2009, the university is a major proponent of solar energy. So it held a competition early last year that asked students to combine their design skills and their photovoltaic know-how to create a solar sitting place.

The winning design, which features a cantilevered solar canopy that supplies enough power to the picnic table for students to plug in a few laptops and iPods at any given time, was recently unveiled on Catholic’s campus. A computer display screen, although it has yet to be installed inside the canopy’s central Plexiglas tower, will eventually educate users about the wattage the device produces, says Lindsey Dickes, a member of the winning design team.

“When users plug in their personal electronics to the table, they will be able to immediately see the effect that the electrical load has on the system,” Dickes tells Newscripts.

Catholic awarded the six-member team $3,000 for its extracurricular work. Dickes says she applied her portion toward a well-deserved vacation. 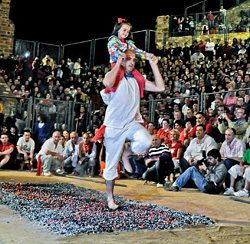 If Newscripts readers don’t get a charge out of solar panels, they might get heated over the results of a recently published study on a fire-walking ritual held annually in San Pedro Manrique, a rural village in Spain. An international team of researchers found that fire walkers crossing a 7-meter-long bed of coals with a surface temperature of 677 oC raised not only their own HEART RATES but also those of loved ones watching in the crowd (Proc. Natl. Acad. Sci. USA, DOI: 10.1073/pnas.1016955108).

The scientists outfitted 38 participants with heart rate monitors and recorded data during both the ritual and the procession beforehand. Spectators who were friends or relatives of the walkers had heart rate patterns that synchronized with the person walking on the hot coals; nonrelated spectators on the sideline did not.

Dimitris Xygalatas, an anthropologist at Denmark’s Aarhus University and research team member, tells Newscripts that the group is now planning similar experiments in Mauritius. The Cavadee ceremony there, he says, involves participants piercing themselves with needles, hooks, and skewers.