Catalytic Earwax, The Cost Of Inflation 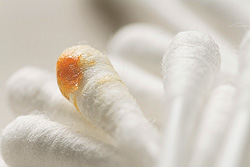 Coming in over the transom the other day was a letter, not an e-mail, from Charles V. Johnson of Lake Geneva, Wis., touting the discovery that earwax is an OXIDATIVE ORGANOCATALYST.

Working with his chemistry set as a kid circa 1960, Johnson would mix water, sodium silicate, and cobalt or other metal salts to make colorful lake pigments, he tells Newscripts. He serendipitously found that his earwax seemed to accelerate the process. Johnson and a friend used the pigments to touch up scratches on appliances in a store that his buddy’s father owned.

Later on, as a zoology undergraduate student at the University of Wisconsin, Madison, Johnson took a daring chance in a chemistry lab: He substituted earwax applied to a boiling chip for a palladium catalyst in an organic synthesis experiment. It worked well to make all-trans-stilbene, although his professor didn’t seem impressed.

“That’s the thing that has bothered me most,” Johnson says. “My instructors didn’t think there was anything to it.”

After graduating, Johnson worked as a chemical technician at Sigma-Aldrich; he is now retired. He has toyed with a few other attempts to use earwax as a catalyst over the years.

For example, Johnson was at his dentist’s office last year and was inspired to try an experiment making a filling. He took methacrylate-based material commonly used in dentistry, added a touch of earwax, and it seemed to work well to polymerize the methacrylate. “It hardened right up,” he says.

Johnson has contemplated what the active catalyst might be in earwax, but he hasn’t been able to do an analysis to find out. Most likely it’s a protein or amino acid, he believes, or possibly a lipid. Organocatalysts typically are biomolecules such as the amino acid proline or a synthetic catalyst such as an imidazolidinone.

“Once we find out what the compound is, it could be treated like a natural product and synthesized in larger amounts,” he proposes. “I’d like to think it could be worth a lot.”

But to the point of his letter: “I consider this catalyst unique and worry that the chemical industry will not develop it into a product,” Johnson laments. “I see a lot of retrogressive technology. I hope this will not fall into that category.”

Big bills:
[+]Enlarge
Credit: Shutterstock
$100 trillion is not what it used to be.

Credit: Shutterstock
$100 trillion is not what it used to be.

An interesting front-page article in the Wall Street Journal back on May 11 described the life and times of the defunct Zimbabwean $100 trillion bill. It’s the highest denomination ever issued for legal tender. But despite all the 0s after the 1, it was worth only about U.S. $5.00.

The bill came about as A RESULT OF HYPERINFLATION, which hit 231,000,000% in Zimbabwe in July 2008. The country tried revaluing its currency. But the value changed too quickly, so it was easier to print larger denomination bills.

The $100 trillion note circulated for only a couple of months in 2009 before Zimbabwe officially abandoned its currency altogether and allowed foreign currency to be used. Ironically, the bills are now novelty items that fetch $50 or more.

At any rate, the U.S. might learn a thing or two from ­Zimbabwe’s experience. Gazillions of pennies sit around unused because you can’t buy anything for a cent anymore. The inflation rate in the U.S. has been pretty low, although it just doubled from 1.63% in January to 3.16% in April and is rising. To head off currency issues, the U.S. could start revaluing money by moving the decimal place over two places. A penny would become worth $1.00, a dollar bill would be worth $100, and so on. The Treasury Department could finally get people to use a $1.00 coin.

Science Communication
Chemistry spelled out on vanity plates and Barbie gets a science makeover for kids’ meals
Environment
The Polybag Solution
Business
Jun Axup
Share X
To send an e-mail to multiple recipients, separate e-mail addresses with a comma, semicolon, or both.
Title: Catalytic Earwax, The Cost Of Inflation
Author: Stephen K. Ritter
Chemical & Engineering News will not share your email address with any other person or company.