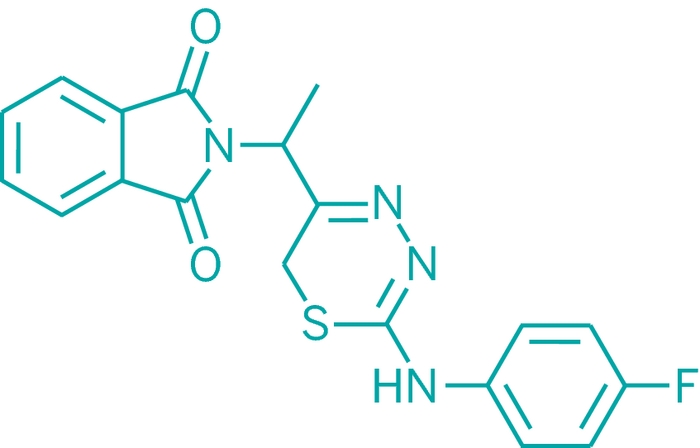 Chemical Abstracts Service has recorded the 60 millionth substance in its CAS Registry, marking a milestone for the division of the American Chemical Society that publishes chemical and related scientific information.

The compound, shown here, is 2-[1-[2-[(4-fluorophenyl)amino]-6H-1,3,4-thiadiazin-5-yl]ethyl]-1H-isoindole-1,3(2H)-dione. It is a potential antiviral substance discovered by a team of Chinese researchers from the Institute of Materia Medica, Chinese Academy of Medical Sciences. The compound is a member of the homologous series of 2-amino-1,3,4-thiadiazine derivatives. It was assigned the CAS Registry No. 1298016-92-8. The patent application for this series of derivatives was submitted to the State Intellectual Property Office of the People’s Republic of China.

“It seems fitting that the 60 millionth substance in the CAS Registry would originate from within an Asian country, given the region’s growing and significant impact on scientific discovery in recent years,” says Christine McCue, vice president of marketing at CAS. “This growth is illustrated not only in the patent arena, but also with respect to journal literature, and led CAS to expand coverage of Asian chemistry through the analysis of more than 300 additional journal titles in the past three years from China, Japan, and South Korea alone.”

The CAS Registry is a comprehensive collection of disclosed chemical substance information, including unique organic and inorganic substances, such as alloys, coordination compounds, minerals, mixtures, polymers, and salts.