LEADERS
[+]Enlarge
Credit: Linda Wang/C&EN
Charpentier (right) has been reelected as chair of the ACS Board of Directors and also chairs the Executive Committee, of which ACS Executive Director and CEO Jacobs is an ex officio member. 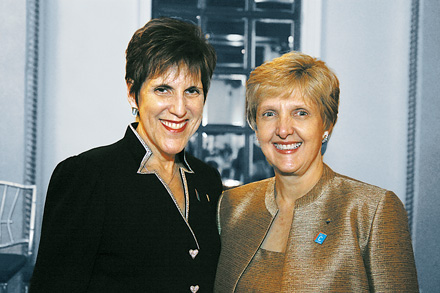 Credit: Linda Wang/C&EN
Charpentier (right) has been reelected as chair of the ACS Board of Directors and also chairs the Executive Committee, of which ACS Executive Director and CEO Jacobs is an ex officio member.

At its meeting on Dec. 9–11, 2010, in Washington, D.C., the ACS Board of Directors reelected Bonnie A. Charpentier as chair for 2011. The board also selected three members to fill open slots on its Executive Committee: William F. Carroll Jr., Peter K. Dorhout, and Pat N. Confalone. Carroll was elected for a two-year term, Dorhout will fill the remaining year of a two-year term previously held by Eric Bigham, and Confalone was elected for a one-year term.

The duties of the committee are spelled out in the society’s bylaws: “The primary responsibilities of the Executive Committee shall be to act ad interim for the Board of Directors in accordance with the provisions of the Constitution, and to provide oversight for all employee personnel policies and practices administered by the Executive Director.”

In addition to electing its Executive Committee, the board acted on a number of other issues during its December meeting. For instance, on the recommendation of the Committee on Public Affairs & Public Relations, the board voted to approve an ACS climate-change position statement as submitted by the society’s Committee on Environmental Improvement and informed by member feedback.

On the recommendation of the Committee on Professional & Member Relations, the board voted to authorize—subject to council approval—the creation of two new ACS International Chemical Sciences Chapters: in Shanghai and Thailand.

Reports presented to the board by various committees are printed below.

For members who wish to observe, the ACS Board of Directors will meet in an open session at 10 AM on Sunday, March 27, at the Hyatt Regency Orange County Hotel in Anaheim, Calif.

The Society Committee on Budget & Finance reviewed the society’s 2010 probable financial performance and considered the 2011 proposed operating and capital budgets.

The society is expected to end 2010 with a net contribution from operations of $20,061,000, or $8,113,000 favorable to the approved budget. After including the Member Insurance Program and New Business Ventures, the society’s projected net contribution for 2010 is $20,757,000, or $9,947,000 favorable to the approved budget. The society is projected to end the year in compliance with four of the five board-established financial guidelines.

The Board Committee on Grants & Awards (G&A) heard from Eric Bigham, cochair of the ACS AWIS/AWARDS Action Group, that the group has drafted a “Best Practices” document that is being finalized and will then be posted on the national awards website. The group recommends that G&A establish canvassing committees for some or all of the 22 awards that have few or no women nominees. The group is reviewing the purpose and eligibility statements for each of the national awards for implicit bias and age requirements. Lastly, the group has surveyed the 2010 Selection Committee members in an effort to develop selection criteria for each award.

Peter Dorhout, chair of the Subcommittee on Nominations & Selection, reported that the subcommittee reviewed and discussed the national awards Selection Committee survey results. The subcommittee is working with the American Physical Society to coordinate the nomination pool of the Irving Langmuir Award in Chemical Physics in an effort to broaden the diversity of the award.

The committee reviewed the list of awards with industrial sponsors whose agreements will expire with the 2012 presentation. The committee voted to invite the sponsors of 10 ACS national awards to renew their sponsor agreements.

The committee voted to reopen nominations for the Earle B. Barnes Award for Leadership in Chemical Research Management and the ACS Award for Team Innovation.

The committee voted to approve the recommendations for awarding grants to the proposals summarized in a table by the ACS Petroleum Research Fund Advisory Board at the board’s September 2010 meeting.

The committee voted to remove the following sentence from the eligibility statement for the George C. Pimentel Award in Chemical Education: “Preference will be given to U.S. citizens.”—Kent J. Voorhees, Chair

The Planning Committee met virtually on Oct. 20, 2010, to revise the ACS Strategic Plan for 2011 & Beyond in preparation for Board of Directors approval in December. The committee responded to strategic progress, changes in the environment, and suggestions received from ACS committees and other members by making changes to the draft circulated for comment last summer. A key revision included replacing the financial sustainability goal with a cross-cutting preamble to the same effect. The plan will be publicly posted at strategy.acs.org in early 2011.

The committee also agreed that a new goal focused on chemistry education should be developed by relevant stakeholders for future inclusion in ACS strategy.

The committee is planning to participate in a board retreat this month to consider key strategic questions and help shape the society’s strategic planning for 2012 and beyond.—Bonnie A. Charpentier, chair

The Board Committee on Professional & Member Relations (P&MR) ratified its interim approval of a request for ACS nominal cosponsorship of the Latin American Chemistry Congress’ meeting in Colombia. P&MR also voted to ratify and forward to the ACS Board of Directors other interim actions approved by the committee, including a recommendation to council on the creation of two new ACS International Chemical Sciences Chapters—for Shanghai and Thailand—and acceptance of a three-year collaboration alliance with the Federation of Asian Chemical Societies.

Completing action on one of its most important issues in 2010, P&MR reviewed and voted to recommend board approval of the nine recommendations developed by the Electronic Dissemination of Meeting Content Task Force to enhance and formalize current efforts to record and post meeting content online after ACS national meetings.

P&MR reviewed recommendations developed by the Board/Presidential Task Force on Society Services & Associated Dues Pricing Models. P&MR requested that the Membership Affairs Committee, working with the Society Committee on Budget & Finance, develop actionable language for P&MR consideration next year—including any needed bylaw revisions—in order to advance the dues-related recommendations in the final report provided by the task force. P&MR voted to receive the report and to dismiss and thank the task force for its important efforts.

P&MR also received a presentation from the chair of the Joint Subcommittee on Diversity (JSD) regarding progress toward the elevation and reconstitution of JSD to a new ACS Diversity & Inclusion Advisory Board. Following the presentation, P&MR suggested that JSD consider reducing the number of members proposed for the new advisory board and develop an alternative to giving external organizations full voting status on this new internal ACS advisory group.—Diane Grob Schmidt, Chair

The chair reviewed attainment of the committee’s 2010 goals:

■ Increase communications to the public: The Chemistry Ambassador initiative has demonstrated solid growth since its creation in August 2009, with 6,300 ACS members currently involved. In addition, the effort to build local section public relations committees has raised the total to 67, which surpasses the 2010 goal by six. The Sparkle communications training workshop, focused on new local section public relations chairs, was resurrected with great success and a class of nearly 30 members was graduated in late October.

■ Effectively handle ACS position statements: The committee actively engaged with other ACS committees and members to process more than a dozen statements in 2010. Two of the new statements received unprecedented involvement from ACS committees, governance, and members on major issues of importance to ACS members—climate change and the creation of new science jobs in the U.S. The chair also detailed progress in resolving position statement inconsistencies between ACS bylaws and board regulations. A proposal addressing this issue will be on the ACS Council agenda for the Anaheim, Calif., meeting in March.

The committee addressed position statements and took the following actions:

■ At the recommendation of the Joint Board-Council Committee on Environmental Improvement (CEI), PA&PR voted to recommend that the board of directors adopt the draft policy statement on climate change as a public policy position of the society.

■ Also at the recommendation of CEI, PA&PR voted to adopt draft policy statements on chemicals management and regulation, on biomonitoring, and on science education as public policy positions of the society.

■ The committee voted to adopt an amended draft policy statement on the U.S. business climate as a public policy position of the society.

■ At the recommendation of the Joint Board-Council Committee on Chemistry & Public Affairs (CCPA), PA&PR voted to retire the ACS policy statement on U.S. Department of Homeland Security funding (ACS 2008-04).

■ At the recommendation of the Council Committee on Economic & Professional Affairs, PA&PR voted to extend the policy statement on employment nondiscrimination (ACS 2007–11) for three additional years.

■ At the recommendation of the Governing Board for Publishing, PA&PR voted to adopt the draft policy statement on public access to high-quality science as a public policy position of the society.

■ PA&PR voted to recommend that the board of directors adopt the 2011–12 ACS Public Policy Priorities.

The committee also reviewed CCPA’s nominations for the 2011 ACS Award for Public Service and voted to recommend that the board of directors approve the CCPA nominees.

The committee discussed the Subcommittee on National Historic Chemical Landmarks’ nomination of the development of mass spectrometry nearly a century ago at Cambridge University as a landmark. The designation will be a joint one by ACS and the Royal Society of Chemistry. The committee voted to designate mass spectrometry as a National Historic Chemical Landmark, contingent upon approval from RSC.

PA&PR received a presentation from staff analyzing the results of the recent midterm congressional elections and how they would affect the top policy priorities of ACS. The presentation also discussed strategic advocacy planning being undertaken by the ACS Office of Public Affairs to help facilitate success in the incoming 112th Congress.—William F. Carroll Jr., Chair

Share X
To send an e-mail to multiple recipients, separate e-mail addresses with a comma, semicolon, or both.
Title: ACS Board Elects Chair, Executive Committee Members
Author: Sophie L. Rovner
Chemical & Engineering News will not share your email address with any other person or company.