IN DEMAND
[+]Enlarge
Credit: Jean-François Tremblay/C&EN
CiVentiChem is expanding its capabilities in India as business grows. Shown is the firm’s analytical lab in Hyderabad. 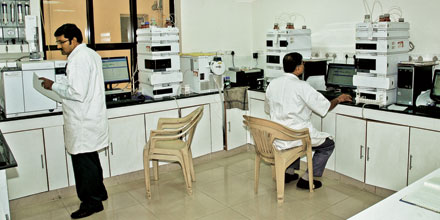 Credit: Jean-François Tremblay/C&EN
CiVentiChem is expanding its capabilities in India as business grows. Shown is the firm’s analytical lab in Hyderabad.

Among providers of services to the pharmaceutical industry, it’s become almost an axiom that customers favor suppliers that offer a diverse range of capabilities. But CiVentiChem is steadily expanding by focusing simply on custom chemical manufacturing—with the twist that it takes place in both Hyderabad, India, and Cary, N.C.

CiVentiChem once had the goal of synthesizing druglike molecules for customers and then screening them against the customers’ biological targets, says S. Venkataiah, managing director of the firm’s Hyderabad operation. “But business became too good, so we remained focused on chemistry and the development of efficient production processes.”

The dual geography of CiVentiChem is unique, Venkataiah asserts. CiVentiChem’s competitors, he says, are purely India-based. But the company employs 14 people at its research lab in the U.S. plus 80 in R&D and manufacturing at its Hyderabad site. Almost all of the company’s marketing, project management, intellectual property control, and customer support work is conducted from the firm’s U.S. headquarters.

The company’s labs in the U.S. and India are both capable of producing molecules in quantities ranging from milligrams to kilograms. Some customers prefer to get all of their chemistry done in India because it’s cheaper, whereas others request that CiVentiChem conduct it in the U.S.

Stan Chamberlain, vice president of chemistry for the Atlanta-based biopharmaceutical company Inhibitex, is in the latter category. “The Hyderabad facility did do some work for us, which went very well, but most of our work is done in North Carolina, since I personally prefer to work face-to-face with local chemists,” Chamberlain says.

Customers with projects in the late stages of development need to make use of the larger Hyderabad site. Equipped with a pilot plant, the Indian operation has facilities for developing large-scale manufacturing processes or producing chemicals in commercial quantities.

CiVentiChem was formed in 1994 in the U.S. by Bhaskar Venepalli and Srinivas Chittineni, both American chemists originally from Hyderabad. In tandem with Venkataiah, they launched the Hyderabad site in 2001 to augment the company’s capabilities. Before joining CiVentiChem, Venkataiah gained drug manufacturing experience at Aurobindo Pharma, a major Hyderabad-based producer of generic pharmaceutical chemicals. Venepalli was a scientist at Eastman Kodak, among other places.

CiVentiChem’s Indian and U.S. sites are both growing. CiVentiChem is hiring chemists in the U.S., where the firm is equipping itself with kilogram-scale manufacturing capabilities that comply with the Food & Drug Administration’s Good Manufacturing Practices. In Hyderabad, the company will develop a second manufacturing location because the current site is fully utilized.

Venepalli has heard allegations of wanton pollution by some Hyderabad-based pharmaceutical chemical companies (C&EN, Jan. 3, page 13) and says he finds the conduct “incomprehensible.” Venkataiah says companies that engage in illegal dumping risk being exposed by the local media with dramatic results. “Their reputation will be ruined, they will have to pay a fine, and their license will be suspended,” he predicts.

In business for more than 17 years, CiVentiChem has a reputation to defend. A sourcing manager at a major U.S. pharmaceutical company who has been a customer since CiVentiChem’s inception tells C&EN that his company makes use of the India site because it needs materials in large quantities. For many chemistry projects nowadays, there are simply no U.S. producers, he notes.

A supplier with dual operations in the U.S. and India may be the next best thing.