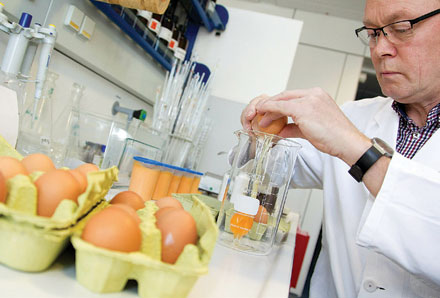 Credit: Newscom
A regulator in Germany examines eggs for dioxin.

A food safety scandal continues to rock Germany after regulators discovered that animal feed contaminated with the cancer-causing agent dioxin has passed into eggs, poultry, and pork.

In March 2010, the company measured amounts of dioxin in the fatty acids it was selling for animal feed at twice the allowable level. But agriculture authorities in Germany learned of the contamination problem only in December. On Jan. 10, the company filed for ­insolvency.

In the past two weeks, millions of eggs from chickens that may have been given the contaminated feed were pulled off shelves in Germany, and some 5,000 farms across the country were closed for investigation. South Korea and China have blocked German poultry and meat products, and Japan is asking importers to report the arrival of German pork, poultry, and eggs. Stores in the U.K. have pulled from shelves products that may contain some of the tainted eggs.

Levels of dioxin above legal limits have been found in a half-million eggs and several pigs, says Miriam Ewald, a spokeswoman for Germany’s Federal Institute for Risk Assessment. However, she says, there is no danger to public health. Although dioxins can cause cancer, problems arise only if they are consumed over a long period because the chemical collects in the body, she explains.

Dioxins are aromatic, polyhalogenated compounds. The German Federal Ministry for Food, Agriculture & Consumer Protection has not reported which particular dioxins were present in the contaminated feed.

German Agriculture Minister Ilse Aigner has called for stricter regulations on food safety across Europe and vowed that those responsible “will be held accountable.”

The last dioxin scare in Europe was in 2008, when unacceptable levels of the contaminant were found in mozzarella cheese produced in Italy.