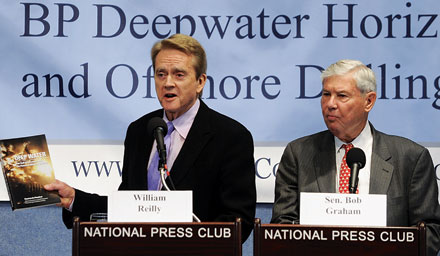 Credit: Roger L. Wollenberg/UPI/Newscom
Reilly (left) and Graham present the findings of their investigation of the April Gulf oil spill.

The seven-member panel’s report blasted the oil industry and the Department of the Interior (DOI), saying its investigation’s “central lesson is that no less than an overhauling of both current industry practices and government oversight is now required.”

The commission found significant mistakes and misjudgment by the well owner, BP; the drilling rig operator, Transocean; and the drilling technical consultant, Halliburton, and it blamed them all for the accident. The specific flaws in drilling operations and decisions will be explained in a separate, soon-to-be-issued report, the commission said.

Commission cochairmen Bob Graham, a former Florida senator, and William K. Reilly, a former EPA head, underscored that the accident revealed problems beyond a single rogue company and showed systemic failures of the oil and gas industry and of federal regulation.

Over the past 20 years, Graham said, the oil industry has drilled deeper and riskier wells in the Gulf of Mexico, and industry and regulators were “lulled into a sense of inevitable success.” This “illusion” masked the dramatic increase in risk that accompanied deepwater drilling, he said, adding that after a long period of rolling the dice, “our luck ran out.”

“Government,” he continued, “let it happen.” Among its recommendations, the commission called for a new regulatory structure and safety agency to oversee offshore drilling and production. Although housed in DOI, the new agency would be independent. It would be led by an administrator with science and management credentials, serving a fixed term and thus protected and “insulated from the inevitable political influences” that are sure to occur with key decisions, Graham noted.

When quizzed about recent DOI reforms, Reilly applauded them but said they were “not enough.”

Reilly pointed to fundamental conflicts of interest for the department because of its dual role of collecting huge oil industry royalty payments while regulating the payer. The new agency, he said, would be insulated by a single safety focus, as well as independence.

The report also called for an expanded role for scientists in overseeing offshore activities, permit decisions, and rig operations.

The commission recommended a jump in funding for enforcement, oversight, and Gulf environmental restoration and called for creation of a new industry-funded organization to develop industry-wide standards of excellence.

Gulf environmental groups, fishing organizations, and citizen groups backed the report, but industry groups did not. The American Petroleum Institute, for instance, said the commission failed to recognize recent oil industry and government reforms and was judging the entire industry on the basis of a single accident.