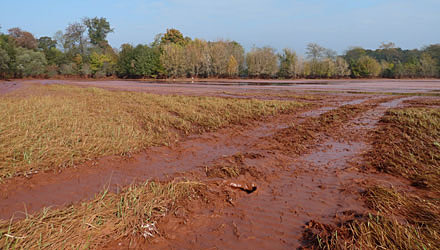 The toxic red mud that spilled from an alumina tailings reservoir into the Hungarian countryside last October could make the soil too salty for plants to grow, according to a new report (Environ. Sci. Technol. DOI: 10.1021/es104000m).

Researchers led by Erik Smolders, an earth scientist at the Catholic University in Leuven, Belgium, went to Hungary after the accident to collect samples of the red mud soil, which they then used to grow barley plants in the lab.

The spill, which killed 10 people, is considered one of the country's worst environmental catastrophes to date. The 700,000 cubic meters of red mud that poured over 40 square kilometers of the Hungarian landscape had an initial pH of 13, with radiation levels 10 times higher than background and contained toxic trace metals.

"People were very afraid because red mud contains toxic trace elements such as arsenic, chromium, cadmium, nickel and radioactive elements," Smolders says. "Our work demonstrates that trace metals and radioactivity are not a concern for growing plants.

"But it's not all good news," he continues. The team found that the barley plants grew slowly in the lab: Compared to crops grown in untainted soil, plants' shoot yield dropped by 25% when red mud concentrations in the soil reached about 5% and above. The researchers also grew barley plants in soil tainted only with sodium hydroxide, a caustic agent in red mud which increases soil salt concentrations as the NaOH degrades. The NaOH-spiked soil slowed the growth of barley plants as much as the Hungarian red mud did, Smolders says. The team also found that the red mud boosted levels of copper, chromium, iron and nickel concentrations in barley shoots, but did not make them exceed toxic levels. "Sodium salinity, not trace metal contamination, is the main concern," he says.

There is a way to remediate contaminated soil, Smolders says. Clean-up crews have added gypsum on top of the red mud to decrease the contaminated soil's pH and accelerate removal of the sodium, he says. Gypsum, a mineral composed of calcium sulfate dehydrate, acts as an antidote for two reasons: First, gypsum induces calcite precipitation, he says, thereby accelerating carbonation of the soil from air, and reducing the pH. And second, calcium ions replace the over-abundance of sodium ions in the soil, which improves the soil's porosity and allows rain to flush away the salt.

The new work is a "rigorous, laboratory-based study," comments Karen Hudson-Edwards, an environmental geochemist and mineralogist at the University of London, Birkbeck. She agrees that for optimum crop growth, salinity should be decreased, and that gypsum could be a good remedy. But she cautions that adding too much gypsum could increase soil sulfate levels and disrupt the soil's geochemical balance. Hudson-Edwards also is "not convinced" that heavy metal contamination of the soil can be entirely ruled out as a possible problem, because red mud is heterogeneous. As a result, the team's samples may not wholly represent the area's heavy metal contamination. Also changing soil conditions, such as water logging, may lead to release of metals to crops over time. She and the researchers agree that to validate the paper's conclusions, scientists must monitor plant growth and metal uptake in the field.

Pollution
Measuring microplastics in seafood
Persistent Pollutants
US FDA sets voluntary arsenic limit in infant rice cereal
Persistent Pollutants
Goodbye to some PFAS in food packaging
Share X
To send an e-mail to multiple recipients, separate e-mail addresses with a comma, semicolon, or both.
Title: Hungary's Red Mud Catastrophe Packs A Punch On Plants
Author: Sarah Everts
Chemical & Engineering News will not share your email address with any other person or company.