Recipients are honored for contributions of major significance to chemistry 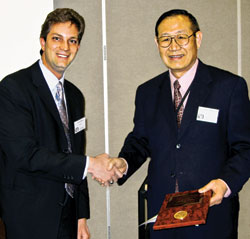 Guo-Shuh (John) Lee, a staff scientist in the Chemical & Biological Process Development Group at Pacific Northwest National Laboratory, was awarded the 2010 Giuseppe Parravano Memorial Award for Excellence in Catalysis Research by the Michigan Catalysis Society. The award honors Lee’s 30-year career in chemical process development, which included pioneering work on the use of H-mordenite zeolite catalysts to produce several important chemical products such as 4,4´-dihydroxybiphenyl, ethylbenzene, and cumene. The award is given every two years to a researcher from the greater Michigan area to formally recognize outstanding contributions to catalysis research and technology development.

Pollution
Measuring microplastics in seafood
Persistent Pollutants
US FDA sets voluntary arsenic limit in infant rice cereal
Persistent Pollutants
Goodbye to some PFAS in food packaging
Share X
To send an e-mail to multiple recipients, separate e-mail addresses with a comma, semicolon, or both.
Title: Parravano Award To Guo-Shuh Lee
Author:
Chemical & Engineering News will not share your email address with any other person or company.