One Home For Various Guests

Supramolecular Chemistry: Chemical cage captures a variety of compounds, regardless of charge 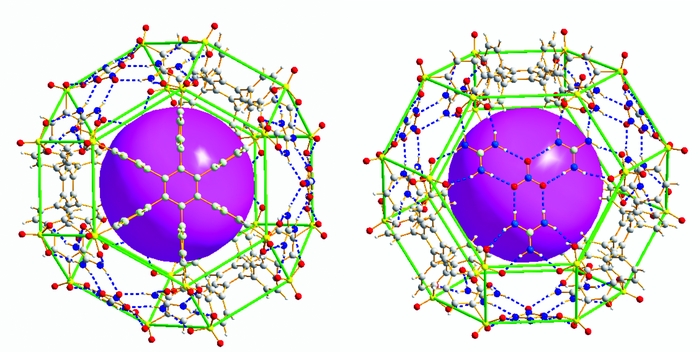 A new chemical cage is proving to be a more versatile trap for molecules, as well as a feat of molecular engineering. A team led by New York University chemistry professor Michael D. Ward created the novel structure out of 20 ions from three distinct molecules, all held together with 72 hydrogen bonds.

Most molecular cages are built to house a specific guest molecule, but the assembly that Ward’s group designed and built is capable of capturing a variety of species, regardless of charge.

The structure has the shape of a truncated octahedron and an interior space of 2,200 Å3, and it can hold organic molecules, transition-metal complexes, and so-called ship-in-a-bottle nanoclusters that have not been observed outside the cage, the researchers report in Science (DOI: 10.1126/science.1204369). They hope the supramolecular assembly will find use as a structural support for building quantum dots, as a cage for confining components for molecular electronics and plasmonics, and as a molecular flask in which to carry out catalytic reactions.

“The assembly of the cage is pretty unique,” Ward tells C&EN. It’s constructed from two kinds of hexagonal molecular “tiles” with edges of roughly the same length and complementary hydrogen bonds. One tile is a tris(guanidinium)nitrate cluster with amino groups that hydrogen-bond to sulfonate moieties in the other type of tile, hexa(4-sulfonatophenyl)-benzene.

With so many hydrogen bonds that have to come together, Ward says, “one could anticipate that the assembly could go in any one of a hundred different directions.” But no matter what additional components he and his coworkers throw into the solution, they always get the same framework structure. “It’s remarkable that it would be that pervasive,” he notes.

The idea for the cage came from graduate student Yuzhou Liu, the report’s first author. “He was playing around with the idea of using these molecular tiles to assemble different polyhedra,” Ward says. “He recognized that if you use these two tiles, that they had the same edge lengths and therefore the complementarity to fold into the polyhedron.”

Ward adds that he often encourages students to pursue their own ideas. “Even if the idea doesn’t work, something else will come out of it. This is one of those rare occasions where the original design actually worked.”

Joseph W. Lauher, a chemistry professor at the State University of New York, Stony Brook, who studies hydrogen bonding in molecular solids, calls the work clever. “The nice thing about this is that it’s very general. They’ve built this cage, and it’s very persistent,” he says. What will be more interesting, he adds, is to see whether the researchers can use the same strategy to build polyhedra of other shapes and larger size. Ward says his group is already trying to create such structures.

Reaction Mechanisms
Tying knots in a molecular string
Analytical Chemistry
Porphyrins Run Rings Around Each Other
Materials
Researchers Develop Combinatorial Chemistry For Molecular Electronics
Share X
To send an e-mail to multiple recipients, separate e-mail addresses with a comma, semicolon, or both.
Title: One Home For Various Guests
Author: Bethany Halford
Chemical & Engineering News will not share your email address with any other person or company.