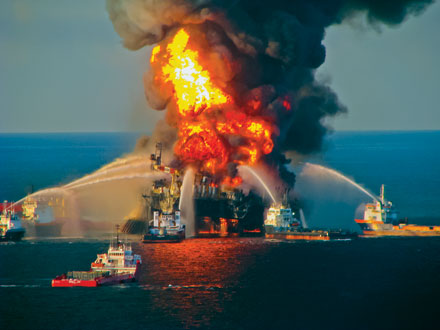 A cornerstone of U.S. energy policy—domestic offshore oil and natural gas drilling and production—is likely to be transformed with enactment of recommendations of the presidentially appointed National Commission on the BP Deepwater Horizon Oil Spill & Offshore Drilling.

Gone would be a system in which a small, underfunded, and poorly trained agency does double time—collecting industry-paid royalties while attempting to oversee industrial safety. In its place would be a new independent safety-only agency that uses risk-based regulations and more and better-trained inspectors to review and implement industry-developed, site-specific drilling management plans.

Since last May, the seven-member oversight panel has held hearings, interviewed witnesses and experts, and traveled the Gulf of Mexico as it studied the April 20, 2010, BP oil rig accident that killed 11 workers and resulted in the worst offshore oil spill in history. The panel’s review grew to include industry operations and government regulation of offshore drilling and production in federal waters. On Jan. 11, the commission held a press conference to release its 380-page report with sweeping recommendations for both industry and government (C&EN, Jan. 17, page 9).

The accident was “preventable and foreseeable,” said commission cochairman Bob Graham, a former Democratic senator from Florida. The commission blames the drillers—well owner BP, rig operator Transocean, and technical consultant Halliburton—for “significant errors and misjudgments” that led to the disaster. But the report emphasizes that the failings cannot be attributed to “a single rogue company”; instead the review reveals failures and inadequate safety procedures of key industry players.

The BP spill commission's report held many recommendations to elevate science. Among them are the following:

• The science role of National Oceanic & Atmospheric Administration should be expanded, with NOAA given consultative authority in leasing and permit decisions.

• A science office should be created with responsibilities for offshore oil and gas activities as well as renewable energy development.

• Scientific and technical research concerning offshore drilling impacts should be accelerated and conducted before drilling begins.

• New ocean observation and coastal and marine spatial planning tools should be developed.

• Gulf environmental restoration funds should be boosted by using

“To believe that this was a singular event,” said commission cochairman William K. Reilly, a former Environmental Protection Agency head, “you have to believe that Halliburton would not have supplied faulty cement to any other company than BP, and that Transocean would not have failed to recognize gas rising in the drill pipe on any but a BP well. Given that these contractors are major service providers to operators in all the world’s oceans, that is hard to accept.”

The report equally blames U.S. regulators, describing them as “overmatched” by the industry experts they are supposed to oversee.

“The Department of Interior lacked the in-house expertise to enforce existing regulations and was unable to overcome persistent industry resistance to strong, meaningful safety regulation,” Graham continued. Reilly added that during the commission’s investigation, they heard Interior staff say they often did not understand the technology that the industry was using.

The report urges U.S. regulators to adopt practices of other nations and paints a disturbing picture of U.S. regulation. Reilly noted that the fatality rate from accidents on oil rigs in U.S. waters is five times that of rigs operating in the North Sea under other countries’ jurisdiction.

The agency responsible for offshore drilling at the time of the accident, the Department of the Interior’s Minerals Management Service (MMS), faced conflicts of interest in having to oversee oil and gas regulations as well as develop offshore oil and gas resources, the commission underscores in the report. Additionally, MMS collected royalties that companies pay so they can drill on federal lands. These royalties, Graham noted, are the government’s second-largest source of income after taxes.

The report makes dozens of recommendations. Key among them is the creation of an independent safety agency within Interior to oversee offshore drilling and to be led by an expert in science and management who serves a specific term and reports directly to the Interior Secretary.

The U.S. should adopt, as other nations have, a “safety case” approach to offshore regulation in which oil companies develop a drilling plan based on the physical conditions of a specific well. Once approved by regulators, the plan would serve as an enforcement guide.

The commission also recommends the creation of an oil-industry-funded, self-policing “safety institute” to encourage a “culture of safety” within the industry.

Beefing up science and environmental research related to offshore drilling is another recommendation. “The lack of understanding of basic environmental science in the Gulf is striking,” noted commission member Donald F. Boesch, a University of Maryland professor and president of the University of Maryland Center for Environmental Science, citing the confusion over the fate, impact, and transport of deep-water oil plumes from the spill. Although he’s pleased with new studies that have been done since the accident, he said they should have come before the tragedy.

Noting the inadequacies of the BP spill cleanup, the commission recommends a complete overhaul of federal and industry spill response and calls for creation of a readily deployable rescue, response, and containment operation, as well as a federal program to oversee spill containment.

Much of the funding for the additional regulations, oversight, and science would come from fees charged to industry, supplemented with congressional appropriations.

The regulated community had little good to say about the report. The American Petroleum Institute charged that it cast doubt on an entire industry based on a single incident and pointed to several industry safety reforms initiated after the accident, some of which, API noted, have been rolled into new Interior Department regulations.

Two days after the commission released its report, Michael Bromwich, director of Interior’s new Bureau of Ocean Energy Management, Regulation & Enforcement (BOEMRE), laid out a detailed proposal to overhaul government offshore regulations, oversight, and enforcement over the next few years.

Interior created BOEMRE last May to replace MMS, which it dissolved in the aftermath of the BP spill. Bromwich had harsh words for the industry and harsher ones still for the government, saying the department lacked a “coherent, consistent enforcement program and, to my mind, one that is sufficiently aggressive. What we are doing now is looking at things from soup to nuts.”

BOEMRE’s and the commission’s recommendations may take years to implement, but both are likely to transform U.S. energy policy—and raise the price of oil and natural gas.

Offshore resources supply one-third of domestic oil, and that proportion is sure to grow. Federal offshore areas hold some 85 billion barrels of oil that are technically recoverable, the commission notes, more than all onshore resources and those in shallow state waters combined. But to get that recoverable oil, the search is likely to go even deeper into Gulf waters and require riskier and more complex drilling technologies, with greater costs and oversight needs.

Outside the Gulf of Mexico, pressure will mount to drill in “frontier areas,” particularly the Arctic Ocean’s Chukchi and Beaufort Seas, the report says. These areas rank behind only the Gulf in potential domestic oil reserves, according to the report. The commission urges the government to raise the regulatory bar for drilling there.

Arctic drilling calls for a new regulatory system, greater oversight, and an immediate, comprehensive environmental research program, Fran Ulmer, commission member and chancellor of the University of Alaska, Anchorage, pointed out at the Jan. 11 press conference.

The Arctic is characterized by extremes of cold, darkness, months of sea ice, hurricane-strength storms, and pervasive fog. Oil spill cleanup is complicated by the area’s remoteness, cold, and ice. Oil degrades and is dispersed more slowly in Arctic water than in the Gulf, and Artic offshore wells are near land and are at shallow depths, allowing oil to drift more easily from wellhead to coastal lands.

Because of the different environmental conditions, lessons learned in the Gulf cannot be applied to the Arctic, the report notes. Instead, companies must prepare specific drilling and accident response plans for the Arctic to protect its diverse environment and its vibrant living ­systems.

In addition, the government is not prepared for an Arctic accident, Ulmer says. Specifically, she points out that the nearest Coast Guard base is 1,000 miles from proposed lease areas, and two of three Coast Guard icebreakers are not ­operational.

Whether in the Gulf or the Artic, offshore oil drilling is an important part of today’s energy policy, the report notes, but it adds that its importance today should not be the same a half-century from now. The commission urges the U.S. to develop new energy sources that are not based on fossil fuels and that waste less energy. Such a shift would be difficult, the commission acknowledges, but any “sensible energy policy” must recognize the risks that come with the benefits of an exhaustible resource.

The BP spill has spurred a sharp examination of conflicts in regulations and oil development, as well as a review of U.S. oil-drilling policies. On the day the commission released its report, three congressional committees announced hearings on its findings. The recommended offshore reforms will transform and strenghten oil and gas drilling regulations and practices.

When explaining his plans for BOEMRE, Bromwich noted the tension between instituting new requirements and allowing drilling to continue as it has in the past.

“I am frequently asked when the pace of offshore permit issuance will once again return to pre-April 20 levels,” Bromwich said. “The honest answer is ‘probably never.’ ”