Roche’s exit cast a pall, but others claim progress in developing RNAi-based drugs 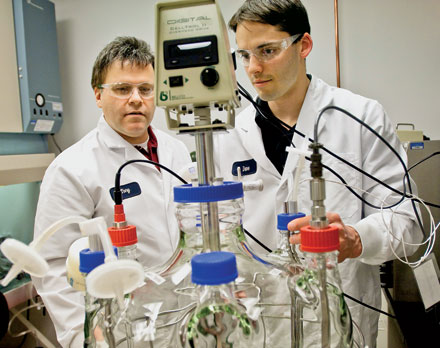 When Roche announced in November 2010 that it would jettison research in the field of RNA interference, industry observers were stunned. After all, it had been among the few big pharma companies putting significant cash into what many considered the most promising new pharmaceutical technology in recent years.

But Roche’s exit was only one sign of problems for companies developing RNAi-based drugs. Several biotech firms failed to meet their goal of signing a partnership by the end of 2010. And some companies are running out of cash, creating the kind of desperate situation that gives prospective partners an upper hand in negotiations.

Given the stream of negative news, the question arises: Was RNAi just a fad? Companies developing RNAi-based drugs say that real innovation requires patience. They point to progress over the past year in overcoming some of the technical hurdles to creating workable therapies.

RNAi refers to a range of technologies aimed at turning off a problematic gene. In the past five years, much of the attention has been on creating and delivering drugs made from small interfering RNA (siRNA), a double-stranded molecule that plays a key role in silencing genes.

In the mid-2000s, the promise of a means of shutting down the manufacture of disease-causing proteins spurred investors and big pharma to sink billions of dollars into companies developing RNAi-based drugs. In 2007, Merck & Co. paid $1.1 billion for Sirna, one of the biggest players in the siRNA field. Alnylam, meanwhile, cut lucrative alliances with Roche and Novartis.

But delivering siRNA to targets inside human cells has proven complex. The move from good idea to drug candidate has been slower than some investors have the stomach for.

“The pendulum swung in one direction,” says Noah D. Beerman, chief executive officer of Cambridge, Mass.-based biotech company RXi Pharmaceuticals, about the field’s heyday. “Certainly, in the last year or so, the pendulum has swung in the other direction.”

Roche’s decision late last year to abandon research in RNAi only added to investor unease. The company had sunk more than $500 million into the field with its 2007 pact with Alnylam; the 2008 purchase of Mirus Bio, a Madison, Wis.-based biotech with an siRNA delivery system; and a deal with Tekmira, a Canadian firm with expertise in delivering RNAi using lipid nanoparticles.

Alnylam was particularly affected by Roche’s withdrawal from RNAi. The Cambridge, Mass.-based company had been receiving substantial research funding—$57 million in 2009 and $54 million in 2008—as part of its research pact.

But Alnylam CEO John Maraganore insists Roche’s decision is having limited impact on his company. The Swiss firm’s exit “had nothing to do with RNAi whatsoever,” Maraganore says. Rather, he says, it was simply a case of a big drug company deciding to cut costs. “As part of their cost-cutting decisions, RNAi, which is an earlier-stage discovery for them, fell prone to the ax.”

Still, Roche’s exit did cast a pall over the field. RXi’s Beerman recalls being at the Lazard Capital Markets Healthcare conference on the day the Roche news broke and immediately getting questions from investors about the state of the industry. “Our view,” he says, “is that this is part of the standard ebbs and flows that go on in biotech.” 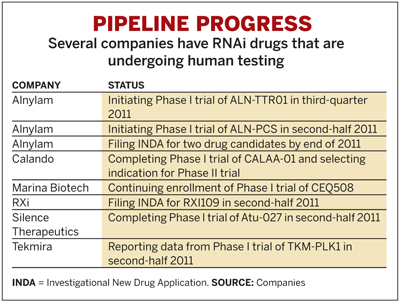 Investors were aware of other setbacks as well. Just weeks earlier, Novartis declined to continue working with Alnylam at the end of their five-year research pact. The decision cost Alnylam a $100 million payment, and the biotech firm subsequently laid off more than 25% of its employees.

And several smaller companies including RXi, Calando Pharmaceuticals, and Marina Biotech were unable to forge new partnerships in 2010 after promising investors that deals were imminent. “People are playing a little bit more of ‘show me the data as opposed to the promise,’ ” Beerman acknowledges.

The partnering challenge is not entirely due to research or investment setbacks, Marina CEO J. Michael French says. When Merck bought Sirna and Alnylam sealed its big-ticket deals, there were fewer companies and delivery technologies to choose from. Today, the field has more competitors, all looking for partnerships.

And the science itself has advanced to more-difficult challenges. “We are all in this space a lot smarter than we were six years ago,” French says. In 2005, demonstrating knockdown of a gene in a mouse was a major advance, he points out: “That was a Nature paper.” Today, the field needs to show that gene silencing can work in humans.

Some of those data are emerging. Last year, Calando made progress with its polymer-based delivery system. In a Nature paper, the firm showed that its lead compound, CALAA-01, accumulated inside tumor cells in a dose-dependent way, an accomplishment that had eluded systemically delivered siRNA (DOI: 10.1038/nature08956).

And Alnylam has made major strides in the past year, Maraganore says. By tweaking the composition of its lipid particle delivery system, the firm has improved the potency of its RNAi-based drugs 100-fold. In the past, doses of 0.5 mg/kg were required to shut down 50% of gene expression; today, Alnylam can achieve the same results by administering 5 μg/kg.

Furthermore, “the vistas of delivery have expanded significantly,” Maraganore says. Just a year ago, he says, “virtually all the data were for liver gene silencing.” Today, Alnylam says it can turn off target genes in immune cells, epithelial cells, and tumors outside of the liver.

Alnylam’s delivery advances are prompting it to shift strategy. It is making the transition from focusing on research alliances to developing its own products. This month, the firm unveiled its “5x15” program, which sets the goal of having five proprietary drug candidates in clinical studies by 2015. By the end of this year, two of them will be in Phase I studies.

The candidates in the 5x15 program have been on Alnylam’s radar for some time. But getting nearer to commercialization is important, analysts say. In the timeline of a technology, says Simos Simeonidis, a stock analyst with Rodman & Renshaw, RNAi “is still in kindergarten or grade school.” Putting five compounds in the clinic by 2015 would be significant progress, he argues.

“This is not just an attempt to spin things,” Simeonidis says. “They are trying to get the message out that ‘we are a drug-based company.’ ”

The next two years will be important for generating clinical data. In addition to starting Phase I trials for two drug candidates, ALN-TTR01 and ALN-PCS, Alnylam will ask for regulatory approval to start human studies of two more candidates by the end of the year.

Even further ahead, Marina Biotech is enrolling patients in a Phase Ib/IIa trial of CEQ508, an RNAi-based therapy for the treatment of a rare genetic disease called familial adenomatous polyposis. Marina’s French believes the rareness of the disease will enable the company to move from a small, 12-patient study to a Phase II trial in 2012, giving it “a reasonable chance of launch” by 2014.

RXi has also chosen its first clinical candidate, RXI109, which targets a gene involved in fibrosis. It expects to file an Investigational New Drug Application (INDA) with the Food & Drug Administration in the second half of the year.

As for larger drug companies, the focus will continue to be on letting the technology percolate. “I don’t believe any of them are ready to go into the clinic in 2011,” says Alan Carr, a stock analyst at Needham & Co. The earliest the industry could see one of big pharma’s siRNA-based drugs entering clinical trials will be 2012, he adds.

Merck is taking a cautious approach, Sachs concedes. The company has yet to publicly comment on its plans for pushing an RNAi-based drug into the clinic, deciding to wait until it’s more confident in the efficacy of delivery systems. In the meantime, it will focus on using the technology as a research tool for other drugs in its pipeline.

For many smaller firms, forging alliances is a critical, renewed goal for 2011. Marina Biotech continues to look for a partner that can test its delivery systems and tease out indications for its compounds, French says. Alnylam is looking to add new alliances that either provide broad access to its technology or are focused on specific drug targets.

Dicerna, a Cambridge, Mass.-based biotechnology company, was able to secure lucrative deals with Kyowa Hakko Kirin and Ipsen Pharmaceuticals last year, and it expects to sign similar pacts this year. “The deal we have with Kyowa Hakko is a template for partnerships going forward,” Dicerna CEO Douglas M. Fambrough says.

Meanwhile, Roche is working to sell off its RNAi assets. “Ideally, by creating a new entity, Roche would then consider the possibility of reentering the field as clinical-stage compounds emerge,” the company tells C&EN. Gordon Beck, from Roche Pharma Partnering, is spearheading the divestiture with the support of Louis M. Renzetti, the firm’s vice president of RNA therapeutics. The goal is to complete the transaction by the end of 2011.

Roche had previously set a goal of asking for regulatory approval to test its first RNAi-based therapeutic in humans by the end of 2010; the Swiss company says that the program will be transferred to the new entity.

Whether Beck and Renzetti will find buyers for the business remains to be seen. “My understanding is it’s already been shopped around to everybody,” Needham’s Carr says. “Before we have some more-extensive clinical proof of concept, it’s going to be hard to find investors that want to commit to it.”

That same investor wariness could sink new companies that might have transformative delivery technologies. “I really do worry about the short term,” Merck’s Sachs says. “It is difficult for a small company in an area that doesn’t have major revenues associated with it to be launching a discovery platform for delivery.”

However, Sachs is much more optimistic about the long-term outlook for RNAi. He compares the maturation of RNAi to that of monoclonal antibodies or peptides. All it will take is one commercial success and the field will bounce back, he predicts: “That feeds back into more investor confidence and innovation.”