How Old Are Your Blues?

At Spain’s only remaining Islamic university, analytical techniques distinguish original pigments from those added in the subsequent six centuries 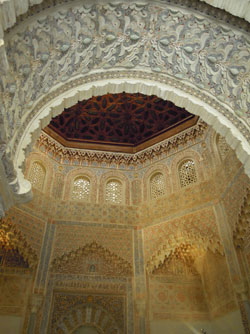 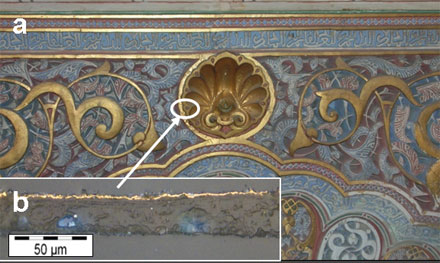 Over the past few years, while art restorers have given the ancient institution a face lift, conservation scientists analyzed the paintings. They wanted to figure out which parts of the art had received touchups or overpainting.

To do so, University of Granada’s Carolina Cardell and her colleagues used micro-X-ray diffraction and Raman microscopy to look at the molecular, mineralogical, and textural makeup of the pigments and binders in the Madrasah’s paintings. With historical knowledge about when pigments were discovered, first synthesized, or popular, the team identified when sections of the artwork had been repainted.

For example, the team distinguished between two kinds of blue pigments: lapis lazuli and synthetic ultramarine. Lapis lazuli pigment is made by grinding up the semiprecious stone of the same name, which contains sulfur, sodium, and silicon. In the 14th century, Islamic artists sourced it from mines in Afghanistan, so the pigment has tiny chunks of different shapes and sizes and contains impurities. Meanwhile, ultramarine is a synthetic version of the blue chemical in lapis lazuli—first made in 1828—so its grains are smaller and have no impurities, Cardell says.

The team also distinguished between two other blue pigments: one from the Islamic era made of azurite (copper carbonate) and another called blue smalt, which was made beginning in the 19th century from finely ground potassium cobalt glass.The team also found that, probably in the 19th century, restorers had souped up the art, by adding gold to the paintings. They found that this gilding was on top of several other painting layers. Muslim artists did use gold during that era, Cardell points out—the nearby Alhambra is definitely gilded. But the artists probably didn’t think it was appropriate to cover the university with gold, she says.