Fluorescent Nanoparticles Fresh From The Microwave 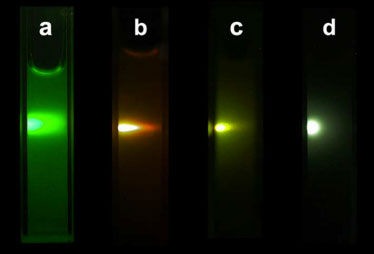 In recent years, so-called upconversion nanoparticles doped with rare-earth elements have attracted interest as stains for biological imaging and even potentially as anticancer therapeutics. But to synthesize them, researchers have relied on some pretty extreme conditions – 24 hours at 300 °C in the absence of water and oxygen, for instance. Now scientists show they can whip up a batch in about an hour, in a microwave oven. (Langmuir, DOI: 10.1021/la204015m)

When irradiated with short-wavelength light such as ultraviolet light, most fluorescent molecules emit light at a longer wavelength, such as visible light. Upconversion nanoparticles, though, are different: Upon excitation with long-wavelength, near-infrared light, they fluoresce at a shorter wavelength, in the visible spectrum.

To make the particles, Mao, with Shukun Xu and colleagues in China, mixed acetates of the rare earth elements yttrium, ytterbium, and erbium; NH4F; and NaCl in the microwave at 160 °C for one hour. The resulting nanoparticles, he says, are comparable in quality to those made under more stringent conditions. The researchers then attached the nanoparticles to antibodies and used the resulting complexes to label cells in a petri dish. How they will fare in vivo remains to be seen, Mao says.

Photonics
Waterproof perovskite lasers could probe inside cells
Materials
Carbon Dots Shine Brightly In Every Color
Materials
Carbon Dots For White LEDs Made In One Step
Share X
To send an e-mail to multiple recipients, separate e-mail addresses with a comma, semicolon, or both.
Title: Fluorescent Nanoparticles Fresh From The Microwave
Author: Jeffrey M. Perkel
Chemical & Engineering News will not share your email address with any other person or company.