Climate Change: Countries agree to include all major greenhouse gas emitters, not just industrialized ones, in a possible new treaty 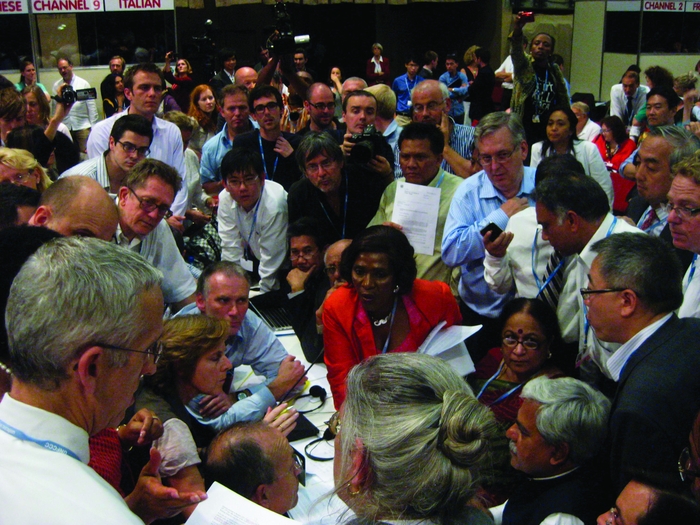 Governments from around the world have agreed to negotiate a new climate change treaty as the result of a two-week United Nations meeting held in Durban, South Africa, earlier this month. But not everyone sees a reason to celebrate, given the history of UN climate meetings that have resulted in little progress.

If nations can hammer out the new treaty, it would require countries that are the world’s largest emitters of greenhouse gases, including the U.S. and China, to control their releases. This contrasts with past climate accords, which called for emission cuts only by industrialized countries.

Under the Durban agreement, “We will now get a system that reflects the reality of the today’s mutually interdependent world,” says Connie Hedegaard, European Union commissioner for climate action.

Sen. John F. Kerry (D-Mass.), a long-time proponent of domestic action to combat climate change, says the agreement reached at Durban could help pave the way politically for the U.S. to reduce its greenhouse gas emissions. Congressional lawmakers opposed to greenhouse gas controls will lose their long-held argument that the U.S. should not commit to cutting its emissions because China, a major economic competitor, has no obligation to do so, Kerry says.

But some observers are less optimistic about what the Durban agreement portends. For example, the path to a treaty established in Durban “will be meaningless and nobody will likely follow through on it,” says Frank V. Maisano, an energy specialist who represents utilities and refiners at the Washington, D.C., law firm Bracewell & Giuliani.

“For this effort to be successful, countries need to be ambitious in their commitments and to refuse to use these negotiations as just another stalling tool,” adds Jennifer A. Haverkamp, director of the international climate program for Environmental Defense Fund, an environmental activist group.

At the Durban talks, the EU played a pivotal role in generating support for a possible new treaty that calls for reductions by all major emitters, observers note. The EU approach was to extend emissions reduction commitments by industrialized countries under the 1997 Kyoto protocol in exchange for developing world support of negotiations on a future treaty.

However, Canada, Japan, and Russia have announced they won’t sign up for a second round of emissions cuts under the Kyoto pact.

Canada’s Conservative government took a further step on Dec. 12, announcing that it was withdrawing from the Kyoto protocol. Canada has done little to cut its emissions, and if it fails to meet its commitments, as is virtually certain, it could face fines under the protocol.

Environment
Emission Controls For Aviation Planned
Environment
Path To A New Pact
Environment
Commitments Are Running Out
Share X
To send an e-mail to multiple recipients, separate e-mail addresses with a comma, semicolon, or both.
Title: Finding A New Path
Author: Cheryl Hogue
Chemical & Engineering News will not share your email address with any other person or company.