[+]Enlarge
Credit: Canek Fuentes-Hernandez
Organic photovoltaic devices like the one shown can be fabricated by customizing electrode properties with polyethylenimine. 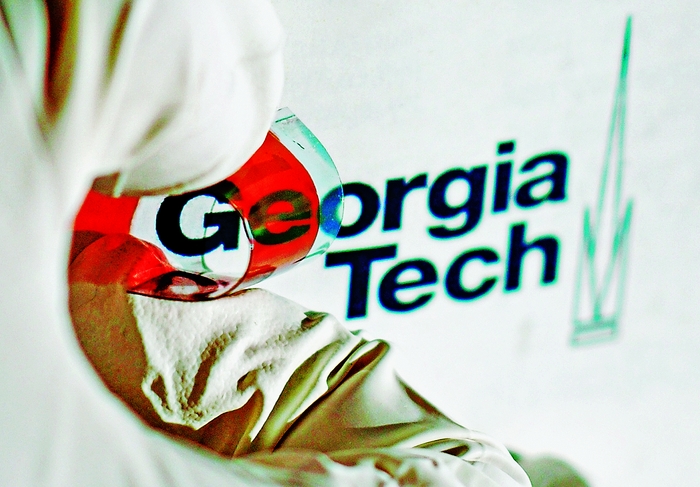 Credit: Canek Fuentes-Hernandez
Organic photovoltaic devices like the one shown can be fabricated by customizing electrode properties with polyethylenimine.

A simple polymer-based coating process can reduce the cost and complexity of fabricating organic optoelectronic devices, according to a study published in Science by researchers at Georgia Institute of Technology (DOI: 10.1126/science.1218829). The finding may broaden the use of solar cells, electronic display technologies, and other applications of organic thin films, which offer key advantages over conventional semiconductor-based devices.

Compared with silicon- and other inorganic semiconductor-based electronics, devices constructed from thin films of organic semiconductors could be more flexible, irregularly shaped, lighter in weight, and less expensive. Some products of this type, for example, organic solar cells, are produced today in limited quantities via roll-to-roll manufacturing and solution-phase processing.

However, organic electronic devices tend to remain expensive because some of the manufacturing steps require vacuum processing to control reactions of air-sensitive materials. The requirement results from the devices’ need for electrodes with low work function. Work function is a measure of the energy needed to strip an electron away from a solid surface. It must be low enough to facilitate transport of electrons in and out of the various layers from which organic electronic devices are fabricated.

Calcium, magnesium, and a variety of metals coated or treated with lithium meet the low-work-function requirement, but they quickly react with ambient oxygen and water. For use as electrodes, these metals must be processed in specialized equipment and encased in a protective coating. Researchers have devised strategies to sidestep the low-work-function requirement, but many of the proposed solutions also involve specialized deposition procedures or work with just a few materials.

The Georgia Tech scientists, led by electrical engineering professor Bernard Kippelen, report what they describe as a “universal” approach to reducing the work function of many types of chemically stable, high-work-function conductors including metals, transparent metal oxides, conducting polymers, and graphene. The new method is based on coating those materials with a 1- to 10-nm layer of polyethylen­imine or ethoxylated polyethyl­enimine. Those polymers are inexpensive and air-stable, and they can be handled as dilute solutions in water and various organic solvents.

The research team, which also includes Georgia Tech’s Yinhua Zhou and Canek Fuentes-Hernandez, used the method to make test devices, including organic solar cells, organic and metal oxide thin-film transistors, and organic light-emitting diodes. In general, the group reports, the test devices’ performances are comparable to those of devices made with standard low-work-function metal conductors and remained relatively stable in some cases for more than 100 days.

Commenting on the study in the same issue of Science, Michael G. Helander, a materials scientist at the University of Toronto, describes the advance as “an appreciable step” toward eliminating costly vacuum deposition procedures but notes that much work remains before low-cost roll-to-roll printing of organic electronics is fully realized.

Materials
Semiconductor Solution
Materials
Easy Route To Conductive Nanosheets
Nanomaterials
Solar Cells From A Paintbrush
Share X
To send an e-mail to multiple recipients, separate e-mail addresses with a comma, semicolon, or both.
Title: Electrodes By Solution Processing
Author: Mitch Jacoby
Chemical & Engineering News will not share your email address with any other person or company.