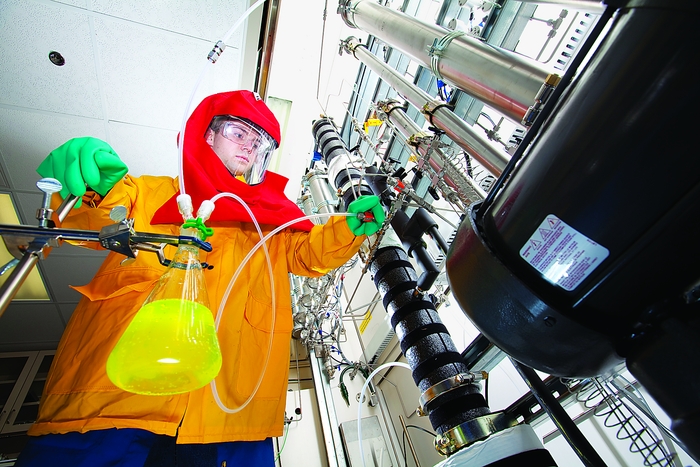 In the spring of 2007, Albemarle’s chief executive officer, Mark C. Rohr, sat down with C&EN and made a bold prediction.

In the five years up to that point, Rohr had doubled the company’s annual sales, to $2.4 billion in 2006, and tripled the value of its stock. So it was with some confidence that he predicted that Albemarle’s sales would double again in the coming five years.

Those five years have passed, and Rohr’s prediction has not come true. Baton Rouge, La.-based Albemarle is a profitable and well-respected specialty chemical company: Its sales were up 21% in 2011, and earnings jumped 35%. Still, the $2.9 billion in sales was only modestly higher than what the firm achieved in 2006.

Ever confident, in the spring of 2011 Rohr met with stock analysts and set another lofty goal: Albemarle’s sales would double between 2010 and 2015 to as much as $5.6 billion. Other metrics such as earnings per share and earnings before interest, taxes, depreciation, and amortization would jump as well.

Rohr retired in September 2011—he is now CEO of chemical maker Celanese—and left the job of fulfilling his promises to Luther C. Kissam IV, a soft-spoken Southerner everyone calls Luke. Kissam, 47, joined Albemarle in September 2003 as its general counsel and became Rohr’s number two in 2010. 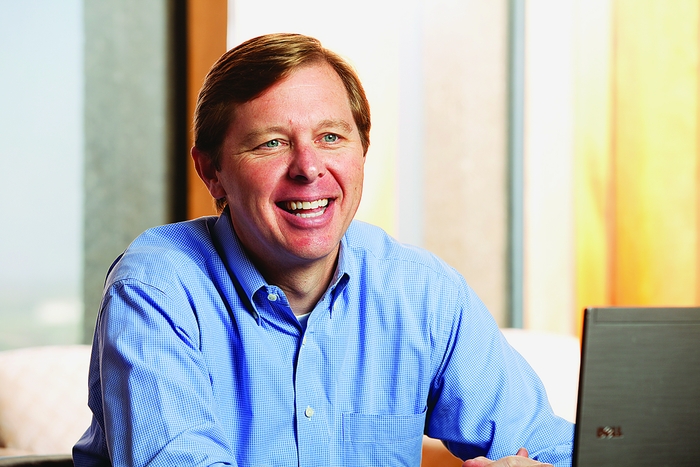 Rohr will be a tough act to follow, observes Michael J. Sison, a stock analyst with KeyBanc Capital Markets who has followed Albemarle for more than a decade. Sison calls Albemarle one of the few top-tier companies in his universe of 22 specialty chemical firms and considers Rohr to be one of the industry’s best CEOs for getting it there. Still, Sison likes what he has seen so far in Kissam. “I think he’s an avid learner and was a great protégé,” Sison says.

Kissam was there when Rohr set his Vision 2015 targets, and the new CEO says he fully supports them. In fact, Kissam and his team of top managers had a follow-up meeting with stock analysts two months ago to detail how they would accomplish the goals through a combination of organic growth and acquisitions.

But Kissam plans to lead the company there his own way. Whereas Rohr is a chemical engineer, Kissam has a degree in English and is a law school graduate. Rohr makes bold predictions: He’s already said Celanese will double its earnings per share. Kissam is a little more circumspect.

The two differ in other ways as well. “Mark has a tremendous capacity to manage a lot of details,” Kissam says. “I’m much more of a strategy person and rely to a larger extent on the team around me. That’s been invigorating for the team.”

Kissam is counting on that team to help him reach the 2015 sales goal. He expects Albemarle to achieve the bulk of its additional revenues, up to $2 billion annually, through in-house projects such as growing as existing customers grow, investing in new businesses, and moving into adjacent markets. The balance, $1 billion to $1.2 billion annually, is likely to come from mergers and acquisitions.

Organic growth requires R&D, and Albemarle seems willing to pay for it. After dropping during the recession, the firm’s R&D spending jumped from $58 million in 2010 to $77 million last year. Kissam expects it to rise further in 2012 and 2013.

One fruit of that research effort is the 239 patents the firm was awarded last year. Kissam compares the result with that of BASF, which spent roughly 25 times as much as Albemarle did on R&D last year but was awarded only about four times as many patents.

Rather than research, though, Albe-marle’s core competency is development, Kissam says. “People come to us with an idea. We’re able to apply our chemical engineering expertise and take it from idea to lab scale to commercial development,” he says.

Kissam contends that Albemarle’s development skills can yield substantial growth in each of its three divisions: polymer solutions, catalysts, and fine chemistry. To provide the needed production capacity, the company raised capital spending last year to $191 million, which is double historical levels.

In Saudi Arabia, Albemarle is building a facility for triethylaluminum, a polyolefin catalyst raw material, in a joint venture with Saudi Basic Industries Corp. In Jordan, the company is doubling capacity for bromine, a key raw material for fine chemicals and polymer flame retardants, through its joint venture with Arab Potash. And in South Korea, it built an R&D lab and manufacturing facility to serve buyers of polyolefin catalysts and a new line of precursors for high-brightness light-emitting diodes.

The facilities are landmarks on a detailed road map that Kissam and his division managers have drawn for meeting the Vision 2015 goals.

Of the three divisions, polymer solutions faces the most challenges and thus has the most modest growth target: a compound annual rate of 9%. Although the division’s sales grew 11% in 2011, that was half of the firm’s overall growth rate. Its sales fell by 12% in the first quarter of this year, and they will take another hit now that Albemarle has announced it is exiting the phosphorus-based flame-retardant business, where it has roughly $50 million in annual sales.

The division’s flame retardants, stabilizers, and curatives are added to plastics for electronics, construction, and wire and cable applications. “Those are dependent somewhat on the economy,” Kissam says, “and in 2008 to 2009, the business was disproportionately impacted.” But long-term prospects are healthy, he argues, especially in developing countries that are likely to tighten fire safety standards in the future.

A wild card is the regulatory scrutiny that has followed a four-part series published in May by the Chicago Tribune. It alleged that Albemarle and other manufacturers of brominated flame retardants manipulated scientific studies to conceal their products’ ineffectiveness. The governor of California recently said his state, the national standard-bearer for flame-retardant regulations, will revamp its laws in light of the series.

Kissam denies the accusation leveled by the Tribune. “Our products are safe and efficacious,” he says. “They do what they are supposed to do. They slow the spread of fire.”

Albemarle At A Glance

At the same time, Kissam points out that the series focused on flame retardants added to flexible foam found in furniture and other cushioned products. Unlike competitors Chemtura and ICL Industrial Products, Albemarle has no appreciable sales to the furniture industry, focusing instead on plastics used in electrical devices. “It’s an ignition source,” he says of such products. “We feel real strongly about the need for flame-retardant standards there.”

Prospects are brighter for Albemarle’s catalysts division, where Kissam expects sales to expand by 12% annually. Three-quarters of the division’s sales are of refinery catalysts, a business in which he is counting on his firm’s leadership position in South America and its joint ventures in Asia to capture developing-world growth.

Catalysts for making polymers and other chemicals constitute the other 25% of the division. There, the Saudi and Korean projects are emblematic of a strategy to serve both commodity and high-end polyolefin markets. In Saudi Arabia, the alkylaluminum cocatalyst plant will supply low-cost Middle Eastern polyolefin makers that use basic Ziegler-Natta catalysts. The South Korean facility will turn out single-site catalysts for higher-cost customers in Asia and Europe seeking to produce value-added polymers.

“We believe our business structure allows us to be a meaningful partner for both of those scenarios,” Kissam says.

He reserves his highest hopes for Albemarle’s fine chemistry business, which sells a variety of brominated compounds and provides custom manufacturing to pharmaceutical, agrochemical, and specialty materials customers. There, he is betting on 18% annual growth through 2015.

Albemarle is confident that coal-fired power plants will adopt its brominated activated carbon to meet coming limits on mercury emissions. In custom manufacturing, Kissam thinks he can continue to deliver 25% growth by focusing on customers that require complex or multistep syntheses and are willing to sign long-term contracts.

Albemarle’s targets for organic growth are “aggressive but achievable,” KeyBanc’s Sison says. However, he’s not as sure about the firm’s plan to add $1 billion or more in sales through acquisitions. “I think that’s tough,” he says. “Acquisitions are always tough.”

Sison sees chemical and polyolefin catalysts as a relatively new market for Albemarle in which deals could be made. He also sees opportunity in fine chemicals, where pharmaceutical company assets are for sale. What he doesn’t see is the addition of a “fourth wheel” like the one Albemarle added when it acquired AkzoNobel’s catalyst business in 2004.

Kissam acknowledges that Albemarle will need acquisitions to achieve Vision 2015. The firm has historically been a conservative acquirer, with the catalyst purchase being its last sizable deal. Kissam says he is pursuing opportunities vigorously, but he cautions that Albemarle has fairly strict guidelines as to what makes sense.

Any deal must build on the firm’s current technologies and capitalize on global “mega­trends” related to population, consumerism, technology, and resource management. It must be in a business in which customers are willing to pay for performance, and it must pass through several financial filters.

“Those are pretty tough criteria,” he admits. “We have the balance sheet and the flexibility to do a deal, but we don’t have to do a deal to achieve growth.”

Ultimately, Kissam is realistic about the growth goals he inherited from Rohr. Reach them or not, he knows that Albemarle will still be a profitable specialty chemical company that’s admired by Wall Street. As he says, “I’d rather stand in front of everyone in 2016 and say, ‘We didn’t achieve our objective because we couldn’t find a deal that made sense,’ than stand up and say, ‘I did a bad deal.’ ”