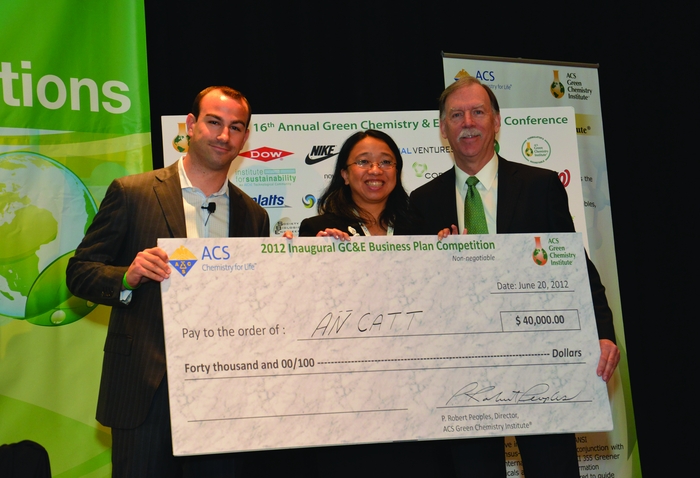 “Our goal is to encourage implementation of green chemistry and engineering and to do so in a way that makes sound business sense,” commented Robert Peoples, director of the American Chemical Society’s Green Chemistry Institute, which sponsored the conference. “We are seeking to illustrate that green chemistry should be viewed as a solid investment, both for the bottom line and for the environment, and we are inviting people to create rigorous business plans to help make that happen.”

AnCatt was crowned the winner for its conducting-polymer-based anticorrosion paint system to replace environmentally problematic chromate, lead, and cadmium paint pigments. AnCatt received a $40,000 check to put toward its business.

The company’s multilayer anticorrosion technology for ships, aircraft, and structural steel is centered on polyaniline nanoparticles dispersed in paint or other coatings, explained Business Development Manager Sue Wang during the firm’s presentation. Scientists had been exploring polyaniline as a corrosion inhibitor for 30 years, she said, but until now no one had come up with a formulation that worked effectively. The secret, she noted, was creating uniform polyaniline nanoparticles.

For the competition, business plans from 15 companies were judged in a preliminary round. Four finalists were then invited to the conference to make formal presentations. A three-member panel judged the finalists with input from scorecards filled out by members of the audience.

Michael Lefenfeld, president and chief executive officer of SiGNa Chemistry, organized the award program. The contest is designed to showcase “real answers to real-world problems,” he explained. Society is looking for the best solutions to problems in diverse arenas, such as clean energy, potable water, cheaper medicine, and lower emissions, he noted. One of the biggest challenges for innovators, Lefenfeld told C&EN, is gaining practical insights on securing financial backing and how to grow a business.

AnCatt will put the prize money toward legal costs to secure intellectual property and to pay for independent product testing, Wang said. She hopes winning the competition will draw the interest of investors. “We still need funds for commercializing current products, developing new technologies, and for setting up a nice coating research and development center we’ve been dreaming about,” she said.