Heading For A Budget Cliff

The threat of deep across-the-board funding cuts is real, yet scientists seem unperturbed 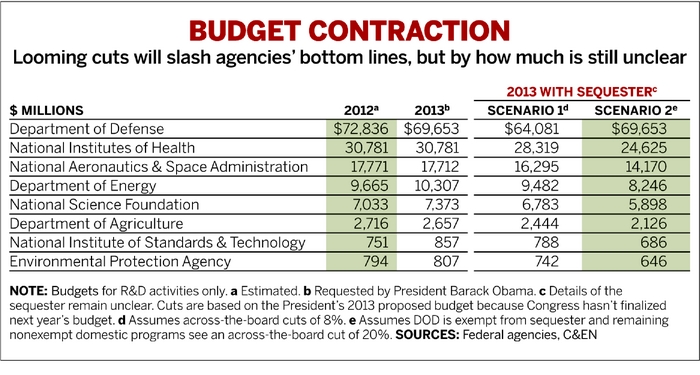 Nearly a year ago, the U.S. was embroiled in a debate over whether or not to raise the debt ceiling. A last-minute deal by Congress to raise the nation’s spending cap saved the U.S. from defaulting on the loans that keep the government running.

The deal, however, had a price. It required Congress to identify $1.2 trillion in budget cuts over 10 years to rein in the deficit. If Congress were to fail, a drastic backstop would kick in: automatic, across-the-board budget cuts that would take effect on Jan. 2, 2013.

Not surprisingly, perhaps, Congress did fail, and the now-triggered automatic cuts, observers say, could range anywhere from 8 to 20% of nearly every federal agency’s budget. Yes, you read that correctly—agencies such as the National Institutes of Health and the National Science Foundation could lose up to a fifth of their annual funding next year.

With the across-the-board cuts, or sequester, now six months away, people are starting to take notice, and Congress is scrambling to find a way to avoid a budget disaster. Part of the problem is that the details of how the sequester will work are unclear, which makes understanding its impact difficult.

The sequester was meant to be so onerous that it would force Congress to compromise on strategic reductions. The problem is, Congress has had little appetite for compromise lately. As a result, almost every federal agency faces an uncertain budget future.

Under the Budget Control Act of 2011, almost $100 billion will be slashed indiscriminately from the discretionary portion of the 2013 budget—which includes the parts of the budget that fund R&D programs. Of this amount, $55 billion is slated to come from defense programs and $43 billion from nondefense programs. With only a few exceptions, these reductions translate into about an 8% cut to federal agencies—including all R&D programs.

Research!America recently released an analysis of what such cuts would mean for health research. Most striking in this report are statistics on grant approval success rates for NIH and NSF. For NIH, the report estimates the 2012 success rate to be 19%, up from 18% in 2011. But if an 8% sequester takes place, the rate drops to 14%. Similarly for NSF, where the success rate for 2012 is expected to hold steady from 2011 at 22%, an 8% cut to the budget would mean only 16% of applications get funded.

But this is a relatively optimistic scenario. The Department of Defense, which already had to lay out plans to cut about $490 billion over the next decade under the debt control law, has been making its case to Congress that it has no more fat to trim. Further budget reductions, it argues, would threaten national security.

At a recent Senate Appropriations Committee hearing, DOD Secretary Leon E. Panetta called the sequester a “meat-ax approach” to controlling the nation’s debt. He painted a bleak picture of what would happen to the U.S. military if defense programs remained under the across-the-board cuts.

DOD’s argument has not fallen on deaf ears—at least not in the House of Representatives, which passed a measure exempting DOD programs from the sequester’s bite. This sets up what some call a nuclear winter scenario for the remaining discretionary programs. Since all of the mandated cuts would then be coming from a smaller pie, the remaining programs would face cuts on the order of 20%.

The nuclear winter scenario would undoubtedly be catastrophic for federal science agencies. Reductions would likely go beyond plummeting grant success rates. Whole programs and divisions might be on the chopping block. R&D as we currently know it would certainly be altered.

What will really happen? That’s the $100 billion question. Agencies aren’t talking about how they would handle the sequester, and until recently there was no sign that anyone in the Administration is engaged in scenario planning. Most folks just figured Congress would take action by passing new legislation that avoids the across-the-board cuts. But if we’ve learned one thing about the current Congress, it’s that we shouldn’t count on it to do anything.

There are measures in both chambers that would require reports on the sequester’s impact. Such information, it’s hoped, would help Congress see the direness of not acting to prevent the sequester.

The science community needs to help in this fight. Those outside the Washington, D.C., bubble likely don’t realize the impending doom. But it’s real, and it’s coming fast. The defense community has already woken up and smelled the coffee, so to speak, and is effectively making its case. If the science community wants the federal funding it has enjoyed for decades to continue, it too must band together and hound Congress to act before it’s too late.

Policy
Budget Conflict Ramps Up
Policy
Congress Still Wrestling With 2014 Budget
Policy
Playing Nice On The Budget
Share X
To send an e-mail to multiple recipients, separate e-mail addresses with a comma, semicolon, or both.
Title: Heading For A Budget Cliff
Author: Susan R. Morrissey
Chemical & Engineering News will not share your email address with any other person or company.