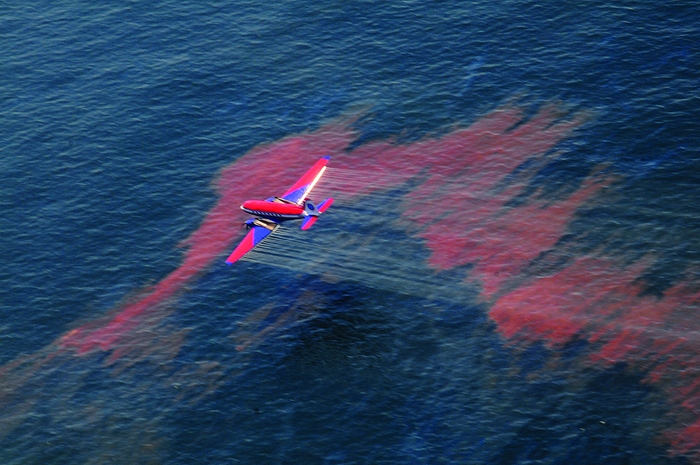 Credit: Stephen Lehmann/Coast Guard
Oil dispersants were used in large quantities in the aftermath of the April 2010 Deepwater Horizon explosion.

More than two years after the Deepwater Horizon oil-rig disaster, little is known about the effects of dispersants applied below the surface of water, says a report by congressional investigators. Also, information is limited about the effectiveness of dispersants in chilly Arctic waters, where much oil drilling occurs, says the Government Accountability Office report (GAO-12-585). “It’s stunning how little we know about the effect of dispersants just two years after using millions of gallons in the Gulf of Mexico” in response to the Deepwater Horizon explosion, says Rep. Brad Miller (D-N.C.), who requested the report along with Rep. Edward J. Markey (D-Mass.). “And whatever lessons we learned from the Gulf of Mexico are probably useless in the Arctic,” says Miller, the top Democrat on an environmental subcommittee of the House of Representatives Science, Space & Technology Committee. The report recommends that the federal Interagency Coordinating Committee on Oil Pollution Research ensure that priority is given to research on subsurface and Arctic applications of dispersants.

Pesticides
US Interior official under scrutiny for blocking pesticide report
Environment
Advisers Disagree With EPA On Fracking
Safety
President’s Pick To Lead Chemical Safety Board Pledges To Examine Struggling Agency
Share X
To send an e-mail to multiple recipients, separate e-mail addresses with a comma, semicolon, or both.
Title: Oil Dispersant Effects Unknown
Author: Cheryl Hogue
Chemical & Engineering News will not share your email address with any other person or company.