With a nonbinding agreement, but also corporate and institutional commitments for sustainability, gathering in Brazil gets mixed reviews 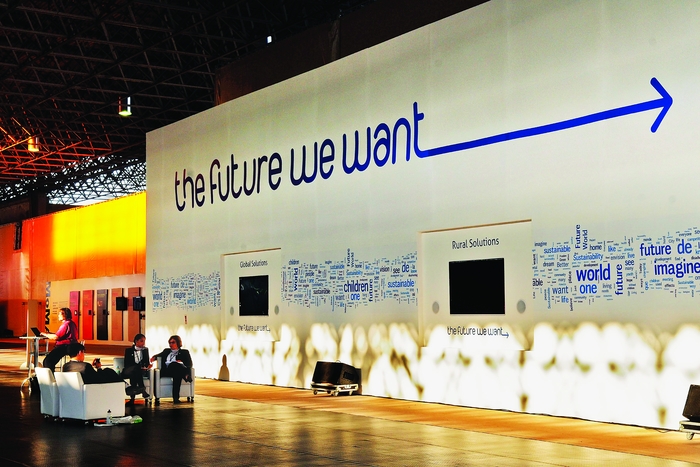 Government officials were speechifying in a convention center at last month’s United Nations Conference on Sustainable Development when a group of disgruntled advocates renounced the meeting. The gathering’s theme was “The Future We Want,” but environmental and other activists were frustrated that their aspirations weren’t represented in high-level discussions. Led by young people from around the world, they marched out of the convention center carrying signs declaring the conference a failure and chanting, “The future we want is not found here.” As they exited, they turned in the badges that allowed them access to the tightly secured conference, indicating they would take their efforts on behalf of sustainable development elsewhere.

Even so, at this meeting held in Rio de Janeiro, governments struck a nonbinding agreement on sustainable development. The gathering also produced hundreds of commitments to specific, measurable sustainability actions from companies, individual governments, colleges and universities, the World Bank, nonprofit organizations, advocacy groups, and others. Observers expect these commitments to have a major influence on the market, the environment, and society with a potentially larger impact than the relatively weak UN agreement.

The Rio confab was a follow-up to the pivotal 1992 UN Conference on Environment & Development, which represented a top-down paradigm at its pinnacle. The gathering 20 years ago produced global treaties on climate change, biodiversity protection, and stopping the spread of deserts, along with an influential document sketching a road map to sustainable development. The 1992 event was also held in Rio—giving rise to the nickname the UN bestowed on last month’s meeting, Rio+20.

Even after the activists marched out and Greenpeace International judged Rio+20 “a failure of epic proportions,” UN Secretary-General Ban Ki-moon, who convened the meeting, saw the conference in a positive light. “Rio+20 has given us a solid platform to build on,” he said. “Rio+20 has affirmed fundamental principles—renewed essential commitments—and given us new direction.”

WALKING OUT
[+]Enlarge
Credit: Cheryl Hogue/C&EN
Near the end of the summit, many young activists declared the UN meeting a failure and marched out. 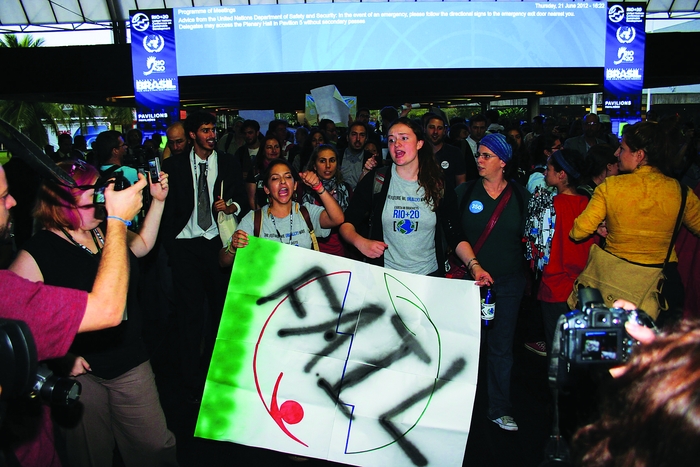 Credit: Cheryl Hogue/C&EN
Near the end of the summit, many young activists declared the UN meeting a failure and marched out.

Others are more nuanced in their appraisals, neither as optimistic as Ban nor willing to pronounce the meeting a washout.

“It would be a mistake to call Rio a failure, but with so much at stake, it was a far cry from a success,” said Susan Lieberman, director of international policy for the Pew Environment Group, a nonprofit organization.

“Expectations for the conference were understandably low, but the outcomes were even more modest,” said Manish Bapna, acting president of the think tank World Resources Institute.

“Certainly, there are reasons why the conference fell short: economic and political crises on the global stage, the challenge of taking on complex issues, and the struggle of coming to a unanimous decision among the diverse views,” Bapna said. “These challenges are real, but they should not be an excuse for inaction.”

The core focus of Rio+20 was on the government officials who gathered for a summit. Yet Rio+20 wasn’t a single event. Rather, it was a disjointed set of meetings over two weeks that were scattered across one of the world’s sprawling megacities.

The official UN confab was held about 20 miles from downtown Rio in a 6 million-sq-ft convention center guarded by machine-gun-toting Brazilian soldiers. It had two distinct parts. The first was a final round of negotiations for a nonbinding global agreement sketching a path toward a green economy. The second was the official summit on June 20–22, where presidents, prime ministers, and other high-ranking officials from 188 countries delivered speeches and endorsed the pact. Secretary of State Hillary Rodham Clinton represented the U.S. government. More than 45,000 people attended the UN gathering. Attendees included representatives of governments, the news media, activist organizations, academe, businesses, and nonprofit groups.

Outside the UN gathering, industry held meetings in an upscale beachfront Rio hotel to trumpet what the private sector is doing to help achieve sustainable development. Speakers included officials from several chemical and consumer products companies.

In addition, citizens groups, nonprofits, scientists, and activists held events throughout the city and nearby. For example, the nine-day People’s Summit for Social & Environmental Justice took place in a city park near downtown Rio. At a local university, the International Council for Science held its Forum on Science, Technology & Innovation for Sustainable Development. Outside the city, a World Congress on Justice, Governance & Law for Environmental Sustainability brought together judges, attorneys general, and other government legal officials. And at a park built as a venue for the Rio 2016 Olympic Games, governments and international organizations set up displays about their work on sustainable development. The hundreds of discrete events connected to Rio+20 were linked by the theme of sustainable development, but little dialogue was exchanged among them.

At the UN meeting, negotiators settled on a nonbinding agreement after five days of negotiations, two days longer than originally scheduled. Endorsed by government leaders at the summit—including Clinton on behalf of the U.S.—the pact backs a new model for economic development: “a green economy in the context of sustainable development and poverty eradication.”

But the text is slim on particulars, except to specify that a green economy is supposed to enhance humanity’s ability to manage natural resources in a sustainable fashion by lessening negative environmental impacts, increasing the efficiency of resource use, and reducing waste. A green economy, it says, will promote sustainable patterns of consumption and production.

The new accord also addresses a variety of topics, such as improving gender equality, incorporating science into government policy decisions, and strengthening efforts on international management of commercial chemicals. It endorses a gradual global phaseout of hydrofluorocarbons, refrigerants that are potent greenhouse gases (C&EN, June 25, page 7). It encourages companies, especially large publicly traded ones, to incorporate sustainability information in annual and other periodic reports. And it calls for the development of new measurement tools to assess a country’s well-being that take into account more than just the factors calculated into gross domestic product.

Although negotiators worked to establish worldwide goals for sustainable development, agreement on what those targets should be remained elusive. In the end, the pact ended up only encouraging governments to continue talking and to propose goals to the UN General Assembly for adoption in 2013.

The accord’s failings aside, the UN gathering yielded something valuable: “The vision of a new economy has been born,” said Oliver Greenfield, convener of the Green Economy Coalition. This group is composed of activist organizations, research institutes, UN agencies, businesses, and trade unions. “A year ago, governments were suspicious of the concept. Now they are exploring green economy as one tool for sustainable development,” Greenfield said.

The formal agreement by governments is important because it gives the market a concrete signal to respond to, said Neil C. Hawkins, Dow Chemical’s vice president for sustainability and environment, health, and safety. Governments help bring about sustainable development through thoughtful, effective policies, he noted. But the business community has a major role to play because it will actually deliver green growth, Hawkins said, indicating that governments are no longer the sole drivers of sustainable development. 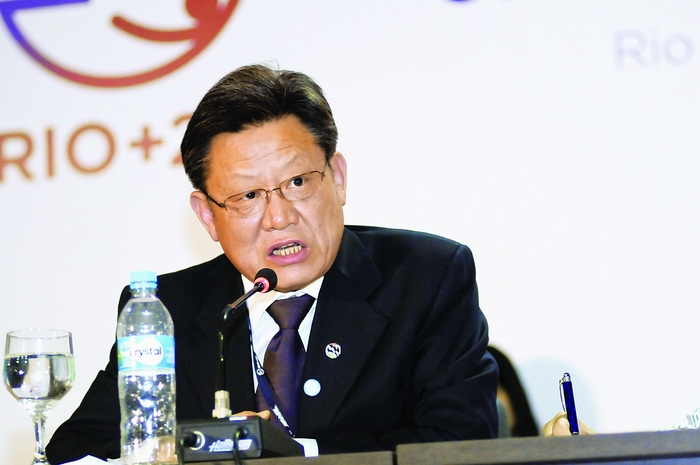 Credit: UN Photo/Maria Elisa Franco
Sha declared voluntary commitments by industry and institutions to be a major outcome of Rio+20.

The world should look beyond governments to deliver sustainable development, said Sha Zukang. A Chinese diplomat who for the past two years led the UN negotiations leading up to the summit, Sha served as the UN conference’s secretary-general. “Governments cannot get the job done alone,” and they need support from industry and activist groups, he said.

The more than 700 voluntary commitments made at the conference by businesses and institutions are a major outcome of Rio+20, Sha noted. Together, those commitments are expected to mobilize some $513 billion for sustainable development in areas such as energy, transport, green economy, disaster reduction, desertification, water, forests, and agriculture.

“This is a major achievement,” Sha said of the voluntary commitments. Addressing the activists’ claims about the conference, he added, “Those who have failed you are the governments.”

Corporate commitments made at Rio+20 include DuPont’s pledge to reduce its nonrenewable energy use by 10% per adjusted dollar revenue by 2020, compared with 2010. Procter & Gamble stated that, by 2020, 30% of its production plants’ energy needs will come from renewables. BASF’s goals include cutting its discharges of organic substances to water by 80% and its emission of air pollutants by 70% by 2020, compared with 2002.

Also at Rio+20, nearly 300 institutions of higher learning from across the world said they would place sustainable development at the heart of college and university curricula. This means that sustainability studies will be incorporated into all majors, from chemistry to business administration.

Meanwhile, a number of governments and institutions signed up for a sustainable procurement program intended to boost public spending on goods and services with environmental and social benefits. The goal, according to the UN Environment Programme, is to change markets, boost the competitiveness of green industries, save money, conserve natural resources, and foster job creation.

All these commitments bode well for the world, said José María Figueres. A former president of Costa Rica, Figueres heads the nonprofit group Carbon War Room, which works to accelerate the deployment of technology that curbs greenhouse gas emissions. If businesses, activists, and others take action to usher in sustainable development, governments will have to follow, he said.

“Rio+20 has been a stepping stone, not a turning point,” Greenfield of the Green Economy Coalition concluded. “We are closer to coherence, but the bigger battles lie ahead.”

Sha was circumspect about the pledges. “Making promises is easy,” he said. “Keeping them takes sustained effort,” he pointed out, adding: “The hard work begins now.”

Environment
Pressure Intensifies On Climate Negotiators Ahead Of Paris Talks
Environment
UN Summit Backs A Green Economy
Business
Pledging Sustainable Corporations
Share X
To send an e-mail to multiple recipients, separate e-mail addresses with a comma, semicolon, or both.
Title: Rio Roundup
Author: Cheryl Hogue
Chemical & Engineering News will not share your email address with any other person or company.