Environmental and health concerns are impelling regulators in some industrialized countries to clamp down on emissions of long-chain perfluorinated chemicals (PFCs). At the same time, several manufacturers are phasing out their production of the chemicals. In their place, manufacturers are developing and selling shorter-chain PFCs, which, they say, can provide the benefits and performance of long-chain PFCs but are more benign to the environment and health.

The endorsement of the program’s expansion is expected to come later this month at the third International Conference on Chemicals Management, which will take place on Sept. 17–21 in Nairobi, Kenya. However, the program’s outreach work is the target of criticism from advocacy groups. They say the program focuses too heavily on marketing new chemicals without scrutinizing the safety of alternatives and doesn’t consider end-of-life handling of PFC-containing products.

PFCs are widely used in modern society. For instance, they impart grease, stain, or water resistance to paper, carpets, and clothing, among other items, and they are used in inks, paints, and cleaning products as surfactants to help these products flow smoothly.

Long-chain PFCs are highly stable, and when released, they persist in the environment. Air and water currents distribute them far and wide. Researchers have found them in the bodies of people and in wildlife, including in the Arctic, far from where they are released. 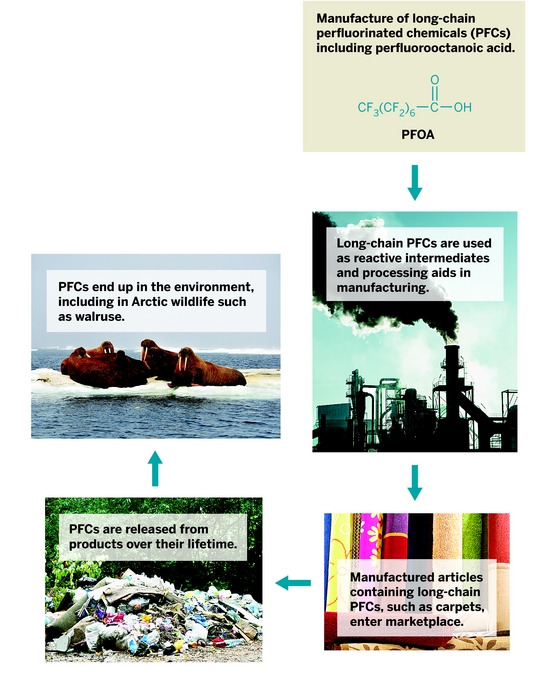 Most perfluorinated chemicals enter the environment through breakdown of manufactured products.

The compounds’ persistence and distribution are problematic because long-chain PFCs have been found to be toxic to animals in laboratory tests, including those involving bobwhite quail and leopard frogs, according to the Environmental Protection Agency. The chemicals cause adverse reproductive, developmental, and systemic effects in lab animals, EPA tells C&EN.

To date, however, “significant adverse effects have not been found in the general human population,” EPA says. But given that long-chain PFCs have a half-life of years in humans, “it can reasonably be anticipated that continued exposure could increase body burdens to levels that would result in adverse outcomes,” EPA says.

In light of the environmental and health concerns, some countries are acting to ratchet down emissions of PFCs or otherwise regulate them. For instance, Canada proposed late last month to prohibit the manufacture, use, sale, import, and export of the long-chain PFC perfluoro­octanoic acid (PFOA), other long-chain perfluorinated carboxylic acids, and products containing them.

Earlier this year, EPA reported that Daikin America, DuPont, Solvay Solexis, and 3M/Dyneon had achieved the 95% reduction in global emissions and long-chain PFCs in products by 2010. EPA added that the companies are continuing to ratchet down use of long-chain PFCs. The four companies and four others—Arkema, Asahi Glass, BASF, and Clariant—have told EPA they are on target to phase out long-chain PFCs by the end of 2015. While praising these manufacturers for their efforts, EPA says it is concerned about companies producing long-chain PFCs that are not in the voluntary program.

This problem is one of many that the international outreach effort on long-chain PFCs hopes to solve. This work started in 2000, when member countries of the Organisation for Economic Cooperation & Development (OECD) began exchanging information about PFCs, such as amount in products, environmental releases, alternative chemicals, exposure to the substances, and potential effects on human health and the environment. The OECD work has also included surveys of governments and PFC manufacturers. When the United Nations Environment Programme (UNEP) joined the program recently, the effort was extended to nations outside OECD.

The FluoroCouncil, a group of manufacturers of fluorinated chemicals, has been supportive of and involved with the OECD-UNEP outreach effort for years, a council staff member tells C&EN. Member companies—Arkema, Asahi, Clariant, Daikin, DuPont, and Solvay—see the OECD-UNEP work as pivotal to a worldwide transition away from long-chain PFCs to shorter, more benign PFCs, she says.

Environmental and health advocates are critical of OECD-UNEP’s push to short-chain PFCs, says Joseph DiGangi, senior science and technical adviser for the International POPs Elimination Network, a coalition of groups seeking eradication of persistent organic pollutants (POPs). Characterizing the past OECD-UNEP effort as “a public relations exercise,” DiGangi says it is “aggressively pushing short-chain versions” with properties similar to those of long-chain PFCs without addressing the potential environmental and health effects of the shorter-chain compounds.

In addition, the OECD-UNEP group needs to extend its work to help prevent continued release of long-chain PFCs from existing products. DiGangi says the OECD-UNEP group should provide guidance on how to handle waste from discarded products and how to clean up sites polluted with these chemicals, such as areas near a 3M plant in Minnesota that manufactured some of these compounds.

Scrutinizing shorter-chain PFCs and working on waste and cleanup of long-chain PFCs aren’t on the official agenda of the Nairobi meeting later this month, however. Instead, the upcoming International Conference on Chemicals Management is expected to endorse broadening the OCED-UNEP work over the next three years, to include, among other things, gathering of information about releases of long-chain PFCs, especially in three countries outside of OECD that may be producing them: Russia, India, and China.

The plan to expand the OECD-UNEP effort will probably get a green light from participants at the Nairobi meeting, even if it doesn’t address the concerns of environmental and health advocates. Nonetheless, environmental concerns regarding long-chain PFCs will likely persist for years to come.