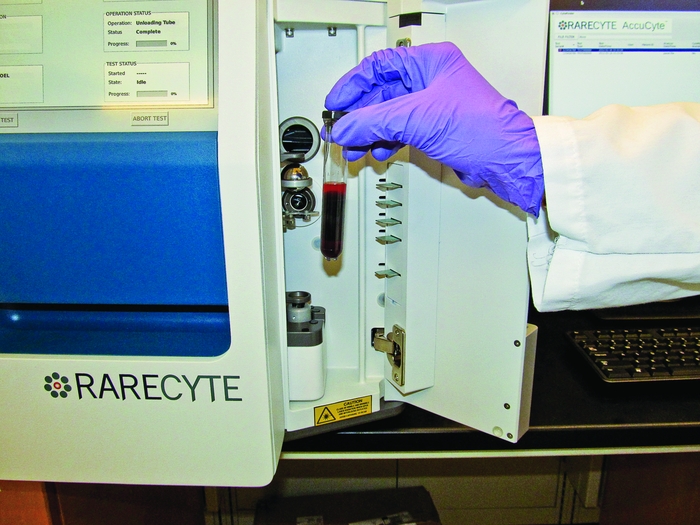 Credit: RareCyte
A blood sample is placed in RareCyte’s centrifuge and fluorescence reader to analyze for circulating tumor cells.

Tumor cells in blood are difficult to find, but if tools were available to reliably detect and isolate them, physicians would have the wherewithal to better discover, study, and treat early-stage cancers.

The start-up company RareCyte is racing against academicians and one large firm to develop such tools. Launched in 2009 by electrical engineer and serial entrepreneur Ronald C. Seubert, RareCyte has developed a fluorescent imaging system that can detect one lethal cancer cell hiding among 50 billion normal blood cells.

The Seattle-based firm is now engaged in clinical studies with partners at the University of Washington, Seattle; the Seattle Cancer Care Alliance; and the Fred Hutchinson Cancer Research Center. To date, RareCyte has raised $11 million from family, friends, and a private equity investor to develop its equipment, software, and reagent kits. Seubert says the firm will start seeking regulatory approvals in late 2013, which would open the way to wide use of the technology.

RareCyte got its start after Seubert met two inventors: Robert A. Levine and Stephen C. Wardlaw, both clinical professors of laboratory medicine at Yale University. More than 35 years ago, the two had developed a capillary-based device incorporated into a desktop centrifuge and fluorescence detector. Using a small amount of blood, the device separates and measures platelets, hematocrit, hemoglobin, and other blood factors in a doctor’s office. The device is still sold by QBC Diagnostics.

In 2000, Levine and Wardlaw thought they could extend the blood measurement technology to measure tumor cells circulating in the blood. They brought their idea to Battelle Memorial Institute, the Ohio-based nonprofit research organization.

Battelle is best known as a government contract researcher and operator of national labs. But it also runs an in vitro diagnostics business that has, for instance, worked with clients to develop DNA and RNA detection systems using gold particles, says Herbert Bresler, a Battelle senior research leader.

Working with Levine and Wardlaw’s idea, Battelle researchers scaled up the centrifugal measurement system to handle 10 mL of blood instead of just 70 µL, Bresler explains.

With the RareCyte device, scientists can centrifuge the larger blood sample, thin it out, apply a fluorescent stain, and then scan it for the presence of tumor cells in the “buffy coat,” a buff-colored layer of cells between the red cells and the plasma. RareCyte also developed a cell isolation technique that allows scientists to study cells of interest.

At the time, Seubert was running Applied Precision, which he cofounded to provide engineering and consulting services to semiconductor makers. The company launched, and then sold, a business making devices that measure the accuracy of computer chip test instruments. It also developed a system, now sold by Becton Dickinson, to scan Pap smears. “That was my entrée into the life sciences,” Seubert says.

After learning about the cell detection technology, Seubert licensed it through Battelle and nurtured it while also continuing to build Applied Precision, by then a cellular-imaging-systems supplier. When GE Healthcare bought Applied Precision last year for an undisclosed amount, Seubert dedicated himself full-time to RareCyte.

He sees RareCyte’s technology as “a platform to investigate rare cell events in blood” and thinks it could also be used to detect infectious diseases. He now has a staff of 17 people, including biologists, surface chemistry experts, mechanical engineers, and software designers.

And Seubert is bringing his engineering background to RareCyte to automate and standardize the analysis of blood samples. By taking the variability out of the system, he says, results will be more consistent and reliable.

Harry Glorikian, managing partner of life sciences consulting firm Scientia Advisors, says he thinks many advances in scientific instruments and diagnostics will come from outside traditional chemical and medical channels.

Robert G. Shepler, managing director at Telegraph Hill Partners, a private equity firm specializing in health care investments, has a similar perspective. He tells C&EN that his company invested in RareCyte, and in Applied Precision before, in part because of Seubert’s engineering perspective. “People from outside health care can bring new perspectives,” he says.

That perspective could supply the edge RareCyte needs to succeed against competitors. Ahead for now is health care giant Johnson & Johnson’s Veridex system, which uses a technology similar to RareCyte’s to measure tumor cells in blood. It already has Food & Drug Administration approval to monitor patients being treated for certain cancers.

Other competitors include researchers at the University of California, Los Angeles, who have developed a high-throughput flow-through optical microscope to detect circulating tumor cells, and scientists at Weill Cornell Medical College and Cornell University, who are developing a semiconductor-based device that collects cancer cells from blood.

The effort to measure tumor cells in blood is evolving, and there are no clear winners yet, Shepler notes. As he sees it, the more options scientists have to study and measure cancer cells, the better off everyone will be. “At some point in the future,” he says, “a checkup at your doctor’s office will also include a check for circulating tumor cells in your blood.”