After a decade of lackluster performance, makers of the white pigment believe their time has come

SNOW WHITE
[+]Enlarge
Credit: Tronox
A worker at a Tronox TiO2 plant in the Netherlands. 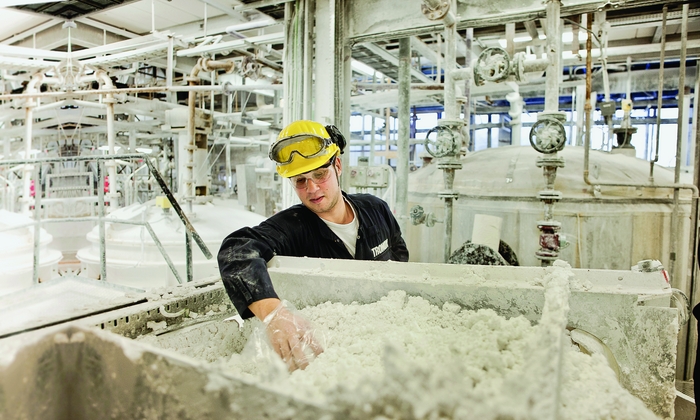 Credit: Tronox
A worker at a Tronox TiO2 plant in the Netherlands.

Commodity chemical businesses are cyclical by nature. Fortunes in even the most woebegone corners of the industry are bound to improve sooner or later. But few sectors in chemicals have enjoyed a turnaround as swift and as strong as the titanium dioxide industry has in recent years.

For more than a decade, makers of the white pigment, used to lighten and boost the hiding power of paint, had more manufacturing capacity than they needed. Unable to raise prices, they limped along, making only enough money to get by. The Great Recession hit the TiO2 industry hard and forced it to shut down marginal plants. When demand recovered, companies were leaner, prices climbed, and profits soared.

Not that it has all been fun and games for the TiO2 industry. The mineral raw materials that pigment producers depend on have been scarce, making security of supply a top priority. And the paint companies that use TiO2 aren’t happy with the high prices and are looking for ways to stretch the precious raw material.

The supply chain that ends at the hardware store shelf is a long one. The snowy white pigment starts out as an ashen ore, called mineral sands, that is mined in places such as Western Australia and South Africa. Common ore varieties are rutile and ilmenite. Rutile has a high TiO2 concentration, more than 90% by weight, and is sent to TiO2 plants directly. Ilmenite, a bit more than 50 wt % TiO2, is often upgraded into synthetic rutile and high-TiO2 slag using techniques such as smelting.

Chemical makers use two major processes to convert the ore into TiO2. In the chloride process, chlorine is reacted with TiO2 in the ore to yield titanium tetrachloride. This intermediate is separated from the other ore components and then oxidized into pure, white TiO2. The sulfate process uses sulfuric acid in an analogous separation process.

Each method has benefits and drawbacks. The sulfate process is more flexible and can consume lower-grade ores such as ilmenite directly. However, operators must dispose of more waste, mostly iron sulfate. The chloride process is more fickle, but it generates less waste and yields premium grades of TiO2.

The long supply chain is mirrored in a long business cycle for the TiO2 industry. From 1986 to 1994, TiO2 producers, feeling flush, built 10 chloride plants, recalls Robert C. Gibney, senior vice president of global supply chain at the pigment maker Tronox. “That resulted in an overcapacity situation that lasted through the rest of the 1990s and even into the first few years of the 2000s,” he says.

There was a modest recovery in the mid-2000s because of the strong U.S. housing market, says Michael D. Brown, president of the consulting group StrategyMark. But with the burst of the housing bubble in the U.S., the bottom fell out of the TiO2 market. Demand dropped 30% in short order.

In early 2009, Tronox, which was spun off from Kerr-McGee only three years before, declared bankruptcy. Gibney says his company shouldered a burden that its competitors didn’t: environmental liabilities inherited from its former parent that cost it $50 million a year. “We were overburdened from the start,” he says. Those liabilities, coupled with market conditions and the inability to raise cash during the financial crisis, forced Tronox under.

The downturn had other repercussions. Tronox closed a plant in Savannah, Ga.; the Saudi firm Cristal Global shut one in Baltimore; and Huntsman closed its Grimsby, England, unit. Gibney says these closures, plus shutdowns at smaller Chinese producers, took about 380,000 metric tons per year of capacity off the market—roughly 7% of the world’s output.

The closures, coupled with a recovering economy, did the trick, Brown notes. Operating rates increased, and TiO2 prices doubled over 2010 and 2011. Profits rebounded as well. Kronos earned $517 million before taxes in 2011, and Huntsman’s pigment business made $501 million. Tronox emerged from bankruptcy early in 2011.

The upstream mineral sands industry enjoyed a similar recovery. Brown says profits were low in that part of the supply chain in the 1990s. “Until 2009, there was underinvestment in the mineral sands mining industry,” he says. When TiO2 demand recovered, suppliers of mineral sands couldn’t keep up, Brown says.

Since 2009, ore prices have quadrupled, but Tronox’ Gibney recounts that ore buyers had even bigger worries. Acquiring the feedstock was, in late 2010, sometimes impossible at any price as there was simply none to be had. The problem was especially acute for high-grade feedstocks such as rutile. Because pigment producers were running their plants almost full out, increasing output further required ores with high TiO2 content. “There wasn’t an extra ton of rutile, synthetic rutile, or slag on the market,” he recalls. “It was all completely gone and committed.”

The tight market for mineral sands is likely to linger for a while, Brown predicts, because it takes longer to add new mining capacity than it does to build new TiO2 capacity. He doesn’t believe the situation will get much easier for TiO2 makers until 2016.

Thus, pigment makers are taking matters into their own hands through deals aimed at integrating themselves with mineral sands operations. The largest such transaction was the merger earlier this year of Tronox with the mineral sands operations of South Africa’s Exxaro Resources. The deal gave Tronox access to more than 700,000 metric tons of ore per year, about 200,000 metric tons more than it needs.

With the merger, Gibney says, Tronox’ cost of making TiO2 is “on par with the lowest-cost producer” if not less—a likely reference to market leader DuPont. “It is essentially what it costs us to extract the minerals out of the ground, process them, and then ship them to our TiO2 plants,” he says.

Tronox isn’t alone in pursuing a back-integration strategy. In June, Cristal moved forward with plans to build a $500 million ore smelting plant in Jazan, Saudi Arabia. It will have capacity to produce 500,000 metric tons of TiO2 slag when it opens in 2014. In 2008, Cristal upped its stake in Australian mineral sands producer Bemax from 35% to 90%.

Kronos and DuPont have some mineral sands operations of their own. Additionally, DuPont says its chloride technology gives it advantages over conventional chloride plants. “This unique chloride-technology-based capability enables use of a broad spectrum of ores as feedstock,” says Boo Ching Chong, president of DuPont Titanium Technologies. “Our flexibility in using a wide range of titanium ores delivers advantages on both sourcing availability and cost.” 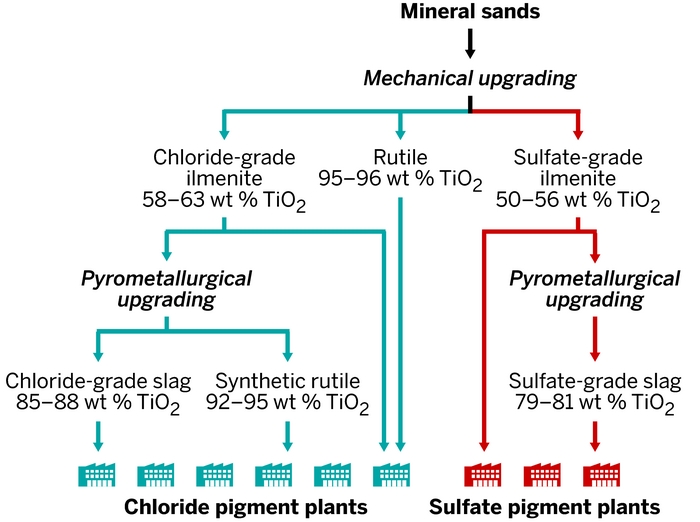 Paint makers are looking to back-integrate into feedstocks as well. Earlier this year, PPG Industries signed a memorandum of understanding to license its chloride technology—it ran a TiO2 plant in the 1970s—to China’s Henan Billions Chemicals. PPG also linked up with Argex Mining, a Canadian firm that hopes to break into the TiO2 business. Similarly, AkzoNobel is partnering with Guangxi CAVA Titanium Industry, which is building a 100,000-metric-ton-per-year TiO2 plant in China.

Paint companies are also trying to reduce costs by pulling TiO2 out of their formulations. Because TiO2 is so important to paint performance, StrategyMark’s Brown says, coatings producers sometimes use more of it than is necessary. However, since TiO2 prices have doubled to $2.00 per lb over 2010 and 2011, companies are initiating programs to cut pigment levels.

For example, PPG unveiled a goal late last year to reduce TiO2 consumption by 10% in 2013. During a recent conference call, PPG Chief Executive Officer Charles E. Bunch told analysts that his company had already reduced consumption by 2% at the end of the first half of 2012.

Paint makers are getting some temporary relief from an easing in the TiO2 market because of slow demand in Europe and China. In July, David Robb, managing director of Australian mineral sands firm Iluka Resources, came out with an assessment that was taken as a sign that the TiO2 market was crashing again. Pigment makers, he said, had reduced production by 25% in the U.S. and Europe. “The pigment market has, in essence, gone from full steam ahead to full stop in little over eight weeks,” he told analysts.

“Ore producers are further back in the supply chain and are therefore more affected by a bullwhip effect in the value chain,” Chong says. “TiO2 producers may choose to purchase additional ore ahead of a price increase.” Hence a subsequent decline in ore purchases, he notes, can’t all be attributed to poor TiO2 demand because pigment companies healthy inventories they can draw down.

Both sides have a point, StrategyMark’s Brown figures. Companies along the TiO2 supply chain did build up inventories last year ahead of price hikes. At the same time, demand for paint in Europe and China really has been sluggish. “We are in a market where year-over-year consumption of TiO2 at the very end of the value chain is down,” he says. “And that is the first time we have seen that since the financial crisis.”

But Brown notes that any turnaround in demand will tighten the market up in short order, perhaps by the second quarter of next year. When that happens, he sees the TiO2 business returning to a strong trajectory. And the good times should last at least until 2015. That is when DuPont will start up a new 200,000-metric-ton-per-year TiO2 pigment line in Altamira, Mexico, as well as 150,000 metric tons’ worth of expansions at other plants.

Altogether, the TiO2 market has enjoyed a tremendous reversal in recent years. This change of fortune, observers say, is not likely to be fleeting.