TALE OF TWO SUBSTRATES
[+]Enlarge
Folate biosynthesis enzymes can use both p-aminobenzoic acid and PAS as substrates. 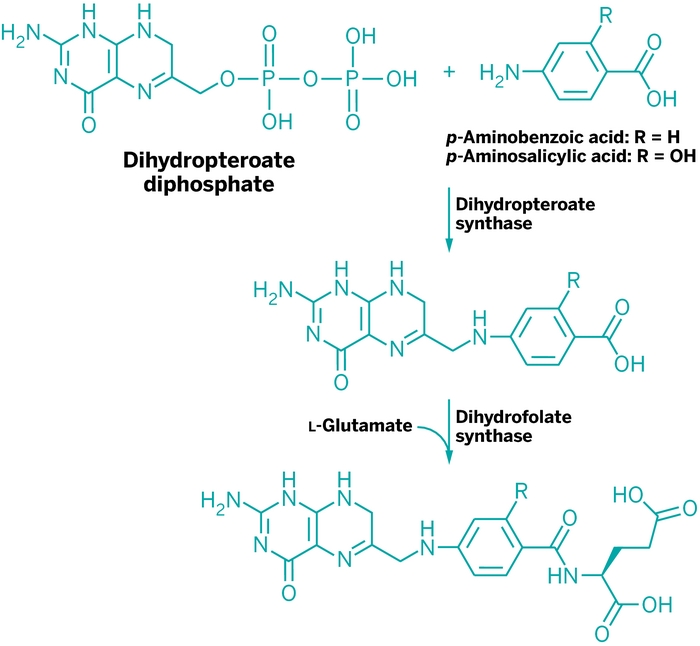 Folate biosynthesis enzymes can use both p-aminobenzoic acid and PAS as substrates.

A 60-year-old tuberculosis drug, p-aminosalicylic acid (PAS), acts as a prodrug rather than by inhibiting a key bacterial enzyme directly, according to a research report (Science, DOI: 10.1126/science.1228980).

PAS and other drugs of its era “have been around for a long time, and we really don’t know how they work,” says Stephen White, a professor of structural biology at St. Jude Children’s Research Hospital in Memphis. Improved understanding of how the compounds operate to defeat bacteria such as Mycobacterium tuberculosis could lead to new antibiotics, White says.

Even as the overall number of new cases of ­tuberculosis has dropped over the past several years, the number of multi-drug-resistant cases has increased, according to the World Health Organization’s “Global Tuberculosis Report 2012.” Tuberculosis killed an estimated 1.4 million people in 2011, the report says.

The new research results help answer a long-standing question about how PAS works in M. tuberculosis cells. Researchers knew that PAS interferes with biosynthesis of folate, which is necessary for DNA synthesis. But it was unclear whether the compound inhibits a key folate synthesis enzyme or acts as a substrate for it and interferes with folate-dependent pathways further down the chain.

In the new work, Kyu Y. Rhee, professor of medicine and microbiology at Weill Cornell Medical College; Clifton E. Barry III, head of tuberculosis research in the Laboratory of Clinical Infectious Diseases at the National Institutes of Health; and colleagues studied the metabolome of M. tuberculosis and how it changes with exposure to PAS. They determined that PAS is a substrate for DHPS rather than an inhibitor.

Examining folate-dependent pathways downstream from DHPS, they further found that PAS treatment alters biosynthesis of other essential compounds. How exactly PAS kills bacteria remains to be determined. PAS could cause accumulation of not-yet-identified toxic compounds or lead to a negative regulatory effect on an enzyme, Rhee says. It’s also possible that PAS produces multiple bioactive species with manifold targets.

The study demonstrates the power of metabolomics approaches to reveal unanticipated ways in which compounds can affect cells, Rhee says.

“The article is a good example of the power of modern analytic biochemistry to uncover details of mechanisms of drug action,” agrees Denis Mitchison, program director of InterTB, a nonprofit organization focused on clinical trials for tuberculosis that is based at St. George’s, University of London. Mitchison cautions, however, that PAS is one of the weakest drugs available to treat tuberculosis and is now rarely used.

But the work on PAS could reveal new vulnerabilities of M. tuberculosis and, with that, new drug targets, says Christopher B. Cooper, senior director of chemistry for the Global Alliance for TB Drug Development, which is collaborating with Rhee to conduct metabolomics studies on other compounds to treat tuberculosis. Adds Cooper, “It’s a different perspective on antituberculosis drugs.”