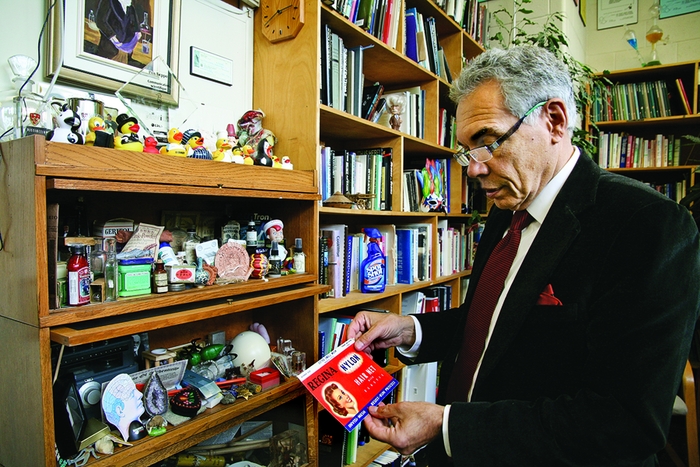 Anyone visiting the Canadian science communicator Joe Schwarcz will find it hard not to get distracted by his treasure trove of science miscellanea.

In his cozy, cluttered office are an original sample of the first synthetic pigment from 1856 called Perkin’s mauveine, several bottles of faux “human pheromone” found on the Internet, vintage nylon hairnets and mechanical toys, piles of his Canadian best-selling books on science, and a dozen or so rubber ducks in his “quack” collection. All are explanatory tools or mementos from Schwarcz’s 13 years as director of McGill University’s Office for Science & Society (OSS).

The office, which sits on the first floor of McGill’s chemistry building in downtown Montreal, has long sought to promote science with the support of the university and several small grants. But last fall, OSS received a $5.5 million (Canadian, roughly the same in U.S. dollars) grant from philanthropist Lorne M. Trottier, a McGill alumnus and engineer who founded Canadian computer company Matrox.

“It’s probably the largest gift for science promotion in Canadian history,” Schwarcz says. The funding will ensure the long-term viability of what’s become a major public science communication hub in Canada, as well as allow OSS to expand its programs, possibly as far as challenging pseudoscience promoters in court, he adds.

OSS is already busy as it is. The office gets hundreds of e-mails a week in both French and English from the Canadian public with questions about topics that include infant vaccinations, the latest celebrity diet fad, the safety of cosmetics, and whether it is dangerous to drink garden hose water. Schwarcz answers the English queries, while the French ones go to Ariel Fenster, OSS associate director. Both are also chemistry professors at McGill. The OSS team is rounded out by a third McGill chemist, David N. Harpp, as well as a communications coordinator and an intern.

In addition to answering e-mails, the OSS team hosts broadcasts about chemistry for Canadian radio, produces columns for several newspapers, and makes television appearances. The team also has given hundreds of public lectures since OSS was established in 1999.

“When the OSS first started out, we wanted to explain interesting chemical phenomena, such as how drugs or food additives work,” Schwarcz says. “But our focus has shifted over the years, and we now do much more quack-busting.

“The pseudoscience movement has gained real speed over the last years. There are so many websites that look authentic for people not familiar with science. So we spend a lot of time investigating online cures,” Schwarcz continues. “We try to tell people how to think critically about these things without telling them what to think.”

It’s precisely this new direction that attracted the attention and the financing of Trottier. “I’ve had a lifelong passion for science,” he says. “OSS is a leading light in Canada against pseudoscience—and there’s so much of it out there. And Joe’s an eloquent public speaker and educator. He’s a Canadian Carl Sagan,” he adds.

The most important issue OSS is tackling now is the antivaccine movement, Schwarcz says. “Not giving your children vaccines for preventable diseases has very direct consequences,” he says, pointing to a measles outbreak in Canada and France last fall. Even though the link between the measles vaccine and autism has been discredited, “people are still willing to believe actresses such as Jenny McCarthy instead of medical health professionals,” he says. “Celebrities are a very big challenge. They automatically have a pedestal,” even if they don’t have the credentials, Schwarcz adds.

Trottier’s grant will help OSS focus on this and other science communication challenges by providing stable funding.

It will also help support whomever OSS recruits to replace Schwarcz and Fenster after they retire. Until then, the team will continue answering tough—but also fun—questions from the public.

Questions like the one that arrived in Schwarcz’s in-box the day C&EN visited: “I recently had a gallbladder operation and now my pillowcase is yellow-orange—is there something coming out in my sweat?”

“Often we have to contact other researchers to get the answer,” Schwarcz says. “We learn a lot in the process, too.”

Pollution
Satellites can now see air pollution inequality within cities
Persistent Pollutants
Goodbye to some PFAS in food packaging
Pollution
Mercury makes it deep into marine trenches
Share X
To send an e-mail to multiple recipients, separate e-mail addresses with a comma, semicolon, or both.
Title: Fighting Quack Science
Author: Sarah Everts
Chemical & Engineering News will not share your email address with any other person or company.

Comments
E. Arunan (February 13, 2012 10:25 PM)
This article should have free access to everyone. While I was tempted to share it in my facebook account, I realized most would not be able to read this. Scientists have to come out of their labs and communicate effectively with the public. I could not agree more with Schwarcz. Credible scientific opinion is needed for public and policy makers and it is in short-supply.
Reply »