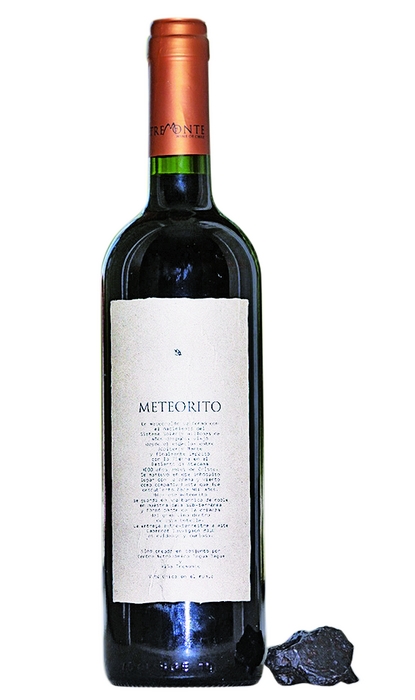 Blackberry, chocolate, black pepper, and even tobacco. These are all flavors you might see listed on that bottle of red wine you woo your main squeeze with this Valentine’s Day.

Thanks to Ian Hutcheon, owner of the observatory Centro Astronomico Tagua Tagua, in Chile, you might one day see “meteorite” join these enological flavors. The Englishman, who also owns a vineyard in Chile’s Cachapoal Valley, recently produced a cabernet sauvignon named Meteorito that has been aged with a 4.5 billion-year-old meteorite. The space rock sat in an oak barrel with the wine for 12 months during fermentation.

According to a Jan. 12 story from the European trade publication The Drinks Business, Hutcheon used a 3-inch meteorite believed to have crashed in the desert 6,000 years ago to give his wine what he calls a “livelier taste.”

Hutcheon tells Newscripts that the meteorite enhances the flavors in the cabernet. And although he is not yet sure what compounds are giving Meteorito its zest—the wine is currently being analyzed in the U.S.—he says that his vineyard carefully filters out any iron that has leached from the specimen.

To get an idea of what’s at work in the galactic wine, Newscripts tapped meteorite expert Christopher D. K. Herd of the University of Alberta to explain what “livelier” might mean, chemically speaking. “What potential flavor is imparted to the wine,” he says, “depends on what type of meteorite is used.” For instance, he adds, carbonaceous stony meteorites “might impart flavors of vinegar, from acetic acid, or a nose reminiscent of mothballs, from naphthalene.”

Scientists have also found butyric acid in some carbonaceous meteorites, Herd says. “While the compound is found in butter and parmesan cheese, it is also what gives vomit its acrid smell. So a person would be wise to choose what meteorite with which to infuse their wine very carefully.”

Hutcheon says that he is passionate about the flavor of the wine but that the goal of making Meteorito is equally important. “The project,” he says, “gives everybody a chance to touch an element of space and taste elements of the birth of the solar system.” Meteorito is now available only at Hutcheon’s observatory for about $10 a bottle.

If Newscripts readers aren’t sure whether they’d like some meteorite-flavored wine with their cheese, perhaps they’ll be more excited about washing dishes with magnetic detergent. A research team led by Julian Eastoe of England’s University of Bristol recently developed an iron-based surfactant that responds to a magnetic field (Angew. Chem. Int. Ed., DOI: 10.1002/anie.201108010).

The researchers showed that their detergent, composed of an alkane chain with a cationic head group and a tetrachloroferrate(III) counterion (FeCl4–), is capable of being drawn from an aqueous phase through an organic solvent by a small magnet. With small-angle neutron scattering, the team also proved that in water, their magnetic surfactant forms small clusters called micelles. Conventional soaps and detergents also form these structures, which give the cleaners their functionality.

When asked why he and his team decided to try making a surfactant that’s switched on by a magnet, Eastoe says they were motivated by “good old-fashioned scientific curiosity.” There has to be a place for that type of inquiry in science, he contends.

Since news of his group’s magnetic surfactant was released, Eastoe says, ideas have flooded in for using the detergent to do things like collect emulsified waste and even wash the feathers of birds caught in oil spills. The researchers are particularly interested in that last suggestion: “The grad students went down to the store to get lube oil and a feather pillow,” Eastoe says. “We’re testing it now.”