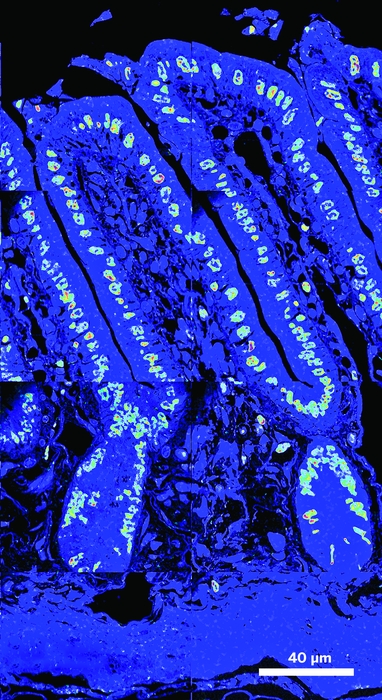 Credit: Courtesy of Claude Lechene
A 15N-14N image of the mouse small intestine shows the incorporation of 15N-labeled thymidine in DNA.

Multi-isotope imaging mass spectrometry, or MIMS, is proving to be about more than just pretty pictures. It’s also a powerful way to answer biological questions.

The method, developed by Claude Lechene and coworkers at Harvard Medical School over the past two decades, is allowing scientists to track the synthesis of DNA and proteins in whole organisms—bacteria, fruit flies, mice, and even humans.

Lechene and his coworkers build these images from samples that have undergone normal metabolic processes in the presence of stable-isotope tracers. They gather such samples by feeding organisms metabolites such as amino acids or nucleosides enriched in stable isotopes such as nitrogen-15. Organisms use these metabolites as building blocks as they replenish constituents in their cells. The researchers then calculate incorporation of the stable isotopes by comparing the isotopes’ abundance in samples to their natural abundance.

15N is particularly useful for tracing the synthesis of new DNA and proteins. Researchers can use other stable isotopes, such as oxygen-18, carbon-13, or deuterium, to track biological molecules, but 13C and deuterium are less useful for whole-organism studies because of their ubiquity in biological molecules. In addition, more 15N and 13C compounds are commercially available than 18O compounds, Lechene notes.

Although the method uses nanometer-scale secondary ion mass spectrometry (SIMS) to detect these stable isotopes, Lechene hesitates to call it mass spectrometry. The instrument detects only up to seven masses simultaneously. “The method is more ion microscopy,” he says.

Those ions are generated by bombarding a sample with a beam of cesium ions. The cesium ions break molecules into atomic and polyatomic fragments, which evaporate and are ionized to form so-called secondary ions. The secondary ions are then guided through a series of ion optics to the mass spectrometer. In his biological applications, Lechene detects nitrogen, both as 14N and 15N, with the cyanide ion, CN–. By moving the tightly focused cesium ion beam from point to point and drilling through the sample layer by layer, Lechene can construct 3-D maps of 15N incorporation. He has achieved spatial resolution of 30 nm and depth resolution of 10 nm.

“Since 1995, Lechene has produced the highest quality images in the field,” says Winograd, who uses conventional time-of-flight (TOF) SIMS for biological imaging. “Trouble is, he almost never publishes his work. In 2007, he published a Science paper on nitrogen fixation which blew everyone in the field away [DOI: 10.1126/science.1145557]. Many of us in the community sure wish we could see more of it.”

Now the community is getting its chance: Lechene published two high-profile MIMS papers last month. In one example, he and his colleagues used MIMS to reveal slow protein turnover in the stereocilia of mouse hair cells, which despite the name are actually found in the inner ear (Nature, DOI: 10.1038/nature10745). These stereocilia help hair cells convert sound waves into nerve impulses. Earlier experiments by other researchers used actin labeled with green fluorescent protein and suggested that all the actin in hair cells is replaced within two or three days. Those studies were done with hair cells removed from infant mice and then grown in cultures with high levels of actin.

PROTEIN TURNOVER
[+]Enlarge
Credit: Courtesy of Claude Lechene
The stereocilia (thin projections) in adult mouse hair cells have high incorporation of 15N (red) at the tips, as shown in this map of the ratio of 15N to 14N. 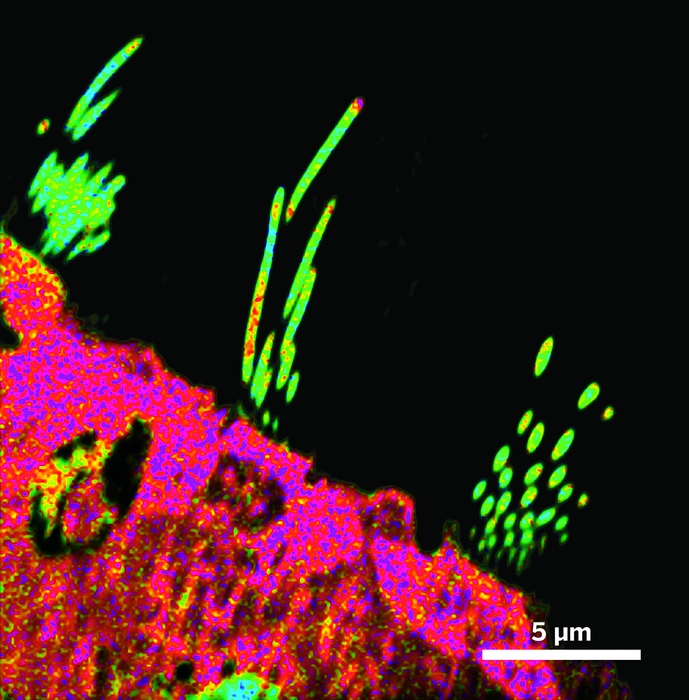 Credit: Courtesy of Claude Lechene
The stereocilia (thin projections) in adult mouse hair cells have high incorporation of 15N (red) at the tips, as shown in this map of the ratio of 15N to 14N.

The MIMS analysis, in contrast, was performed with adult mice and revealed something very different. “We could see that hair cells themselves were turning over relatively fast,” Lechene says, “but the stereocilia were lagging for a long period of time.” The only part with high turnover was the tip, the portion of the stereocilia responsible for transducing mechanical motion into auditory nerve impulses. “This finding was contrary to the dogma that stereocilia turn over very fast,” he says.

The use of stable-isotope labeling allowed Lechene to study the cells under normal conditions. “We have demonstrated that we can study protein turnover in volumes that are smaller than anything that has ever been done, in conditions that don’t disturb the system,” he says. “There is nothing that approaches this kind of measurement in biology.”

Lechene has also used MIMS to investigate a long-standing question about stem cell division (Nature, DOI: 10.1038/nature10734). The immortal strand hypothesis proposes that when stem cells divide, the older DNA strand stays with the daughter cell, which is destined to remain a stem cell.

To test this hypothesis, Lechene used MIMS to track the incorporation of 15N-labeled thymidine in the DNA of crypt cells, a type of stem cell in the small intestine. His team labeled the stem cell DNA by administering 15N-thymidine to young mice during their first eight weeks of life, when intestinal stem cells are still forming. They then fed the mice 14N-thymidine for four more weeks. At the end of those 12 weeks, if the immortal strand hypothesis were true, 15N-labeled DNA would still be found in the stem cells. Lechene’s team found that no dividing cells, including stem cells, retained the label.

In the same paper, Lechene showed that MIMS can be used to study human metabolism. His team administered 15N-thymidine intravenously to a healthy volunteer and then analyzed smears of peripheral white blood cells with MIMS. As expected, they didn’t find any 15N-labeled white blood cells immediately after the infusion, but they detected some four weeks later.

Others in the mass spectrometry imaging community can’t wait to see more of these 3-D MIMS images. “How he makes that work, I just don’t know,” Winograd says. “We’ve been trying to do this sort of thing with TOF-SIMS, and it is really difficult.”