One Drug to Rule Them All
[+]Enlarge
Credit: J. Med. Chem.
Crystal structures provided critical information to develop a compound (stick structure) that tightly binds several anti-apoptosis proteins, including the one whose binding pocket is shown. 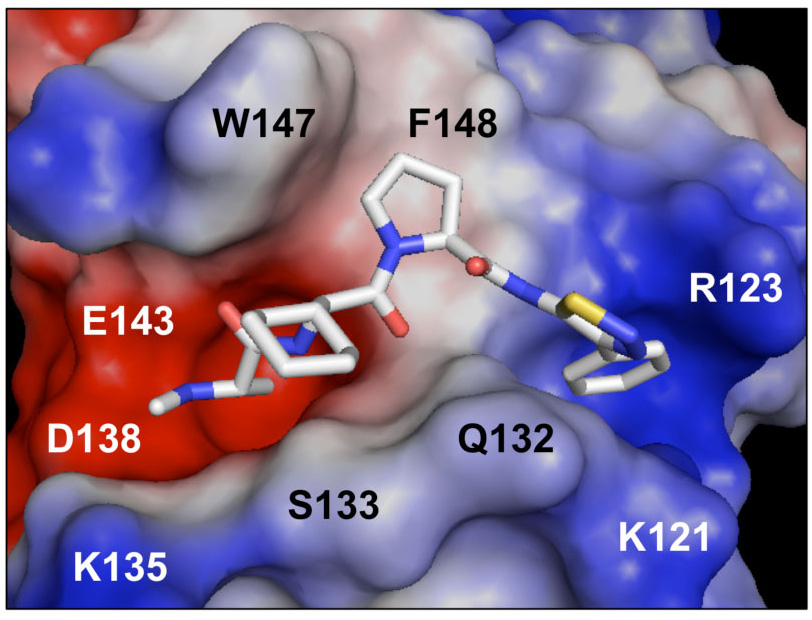 Inside each cell is a chemical pathway that, once triggered, marches the cell toward apoptosis--programmed cell death—once the cell is no longer needed. Cancer cells have developed clever ways to subvert apoptosis and continue their malignant growth. Now, researchers have developed an anticancer drug candidate that turns the apoptosis pathway back on in cancer cells, and they have already performed a small study with the potential drug in patients (J. Med. Chem., DOI: 10.1021/jm300060k). 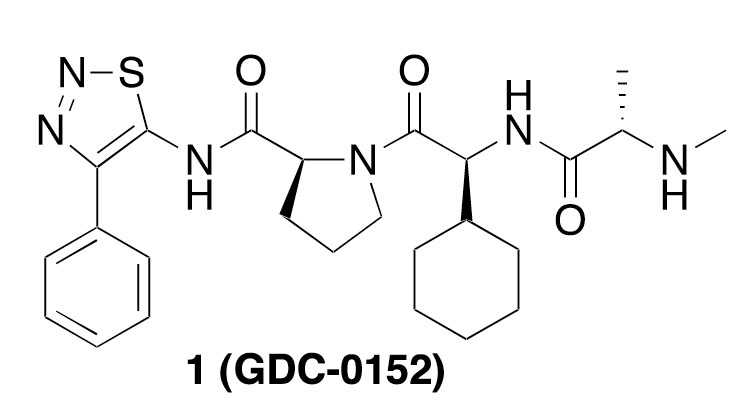 When a cell is targeted for apoptosis, a protein called Smac binds to other proteins that inhibit apoptosis and primes those proteins for degradation. But cancer cells are deficient in Smac, keeping them alive. “Why not take advantage of the cells’ natural mechanisms for killing themselves?” asks John Flygare of biotechnology company Genentech, who also teaches at Stanford University. Crystal structures revealed that the four residues at Smac’s N-terminus interact with the so-called inhibitors of apoptosis (IAPs), so Flygare and his team used the four residues as the starting point for drug development.

However, cells rely on not just one IAP protein, but several. “These all have different roles in promoting apoptosis,” Flygare says. “We needed a pan-selective compound to take out all the IAPs.” Using the IAP crystal structures as guides, the researchers synthesized and tested about 800 compounds for binding affinity and bioavailability. The last drug standing was GDC-0152, a short peptide mimetic, which binds tightly to four critical IAP proteins. To test efficacy, the researchers fed GDC-0152 to mice with human breast cancer tumor grafts. By dosing the mice once weekly with 10 mg/kg or more, they observed significant tumor reduction and good drug tolerance.

To gear up for human studies, the researchers tracked blood levels of GDC-0152 in mice, rats, dogs, and monkeys and modeled how quickly humans would absorb and metabolize the compound. In a toxicity safety study, 36 people with various types of cancer then received 0.049 to 1.48 mg/kg of the compound through intravenous infusion. They cleared the drug just as the researchers predicted, which Flygare says bodes well for future clinical studies.

“These drugs are very promising,” says Robert Korneluk of the University of Ottawa. He knows of a few other companies developing drugs that target the apoptosis pathway, but says this is the first publication to include data on humans. “I think this drug is an interesting and a good representative of the class. It does its job,” he says. Whether the drug will outperform existing cancer drugs, he adds, is unclear. Genentech declines to say what’s next for the compound.

Drug Discovery
A small molecule in the gut could explain bariatric surgery’s anti-diabetic effects
Vaccines
What will it take to make an effective vaccine for COVID-19?
Pharmaceuticals
Drug ingredients considered inert might have biological activity
Share X
To send an e-mail to multiple recipients, separate e-mail addresses with a comma, semicolon, or both.
Title: Death To Cancer
Author: Erika Gebel
Chemical & Engineering News will not share your email address with any other person or company.