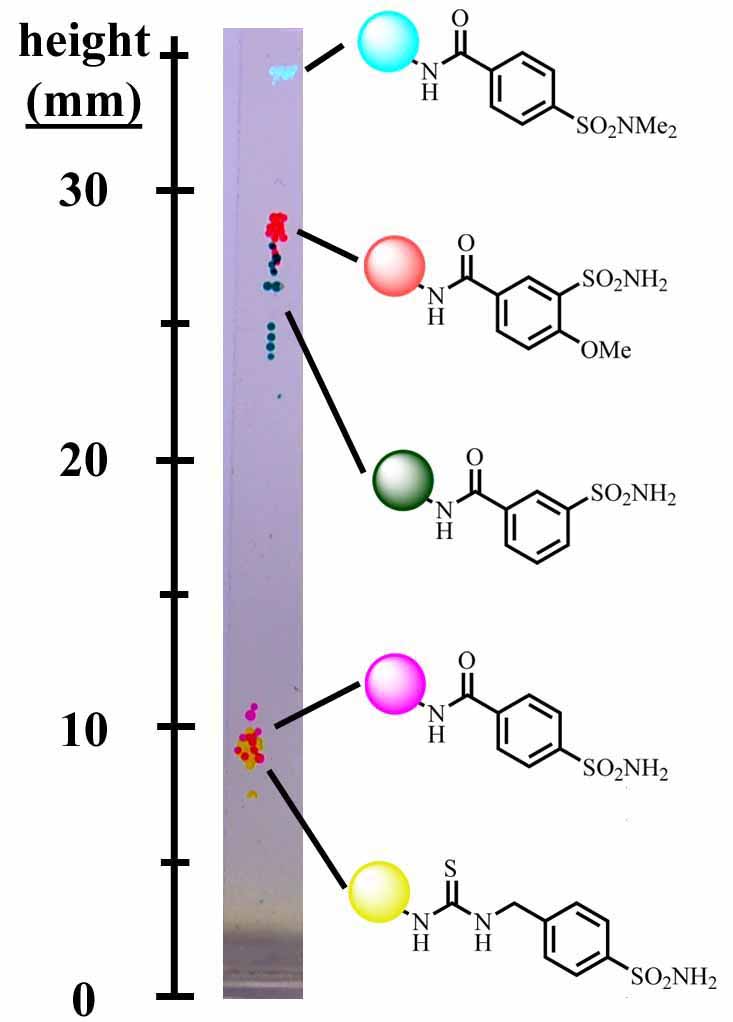 Researchers have demonstrated a new way to analyze the interaction of a protein with various ligands: magnetic levitation (J. Am. Chem. Soc., DOI: 10.1021/ja211788e). Although still in its early stages, the low-cost, portable method may prove useful for diagnosing disease.

George Whitesides at Harvard University had already used magnetic levitation to analyze the chemical composition of food and water (C&EN, May 24, 2010, p. 32). Encouraged by this success, he decided to apply the approach to protein analysis, with the eventual goal of detecting disease-related proteins in blood. Other methods, such as mass spectrometry, can already accomplish diagnostic detection, but they require bulky and expensive equipment.

Whitesides decided to use magnetic levitation to detect a change in the density of porous gel beads that occurs when a protein binds to ligands inside the beads. To analyze the interactions of a protein, bovine carbonic anhydrase, with small-molecule inhibitors, he and his colleagues attached the inhibitors to the inside surfaces of colored diamagnetic beads, with a different color for each of the five molecules. They added the beads to a cuvette containing the protein in a paramagnetic gadolinium(III)-containing buffer, and allowed the protein to diffuse into the beads over several days.

According to Whitesides, the main advantages of the levitation system are its low cost and portability. The magnets cost only about $5 each, and the device requires no electricity or batteries. Because the beads are visible to the naked eye, researchers can make measurements with a simple ruler with a millimeter scale.

However, using commercially available beads, the technique can analyze only small proteins. “We’d like to be able to measure antibody binding, but first we need to find or make beads that have much larger pores,” says Whitesides. Beads with larger pores could also speed the process of protein binding, he says.

David Walt, a chemist at Tufts University, notes that the method may prove especially useful for medical diagnostics in resource-limited settings, but its simplicity should also appeal to the larger community of researchers. However, the method requires protein concentrations to be at least micromolar, so he says that “valuable or hard-to-obtain proteins would be difficult to measure.”

“The method is important because it’s really out-of-the-box thinking,” says

Timothy Swager, a chemist at the Massachusetts Institute of Technology. “I doubt anyone doing protein detection has considered anything remotely like this.”

Comments
Robert D. Blackledge (March 12, 2012 10:27 AM)
Using similar technology the Whitesides group has made their first foray into forensic science. Their paper, "Analyzing Forensic Evidence Based on Density with Magnetic Levitation" has been accepted for publication by the Journal of Forensic Sciences.
Reply »