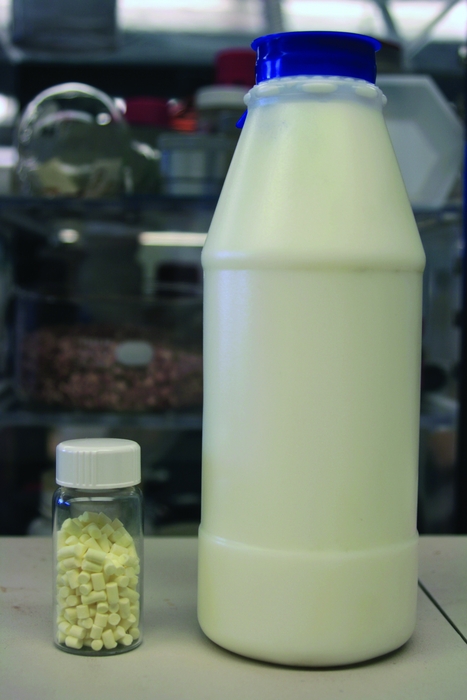 Credit: Courtesy of Allen Apblett
Yellow pellets composed of calcium tungstate nanoparticles can be used to decontaminate radioactive strontium from liquids, such as milk.

Pellets capable of removing radioactive isotopes and heavy metals from milk, juice, and other beverages have been developed by chemists at Oklahoma State University. The material could be used by consumers in emergency situations to take heavy metals out of juices and other foodstuffs, and it could decontaminate radioactive liquids in the event of a nuclear accident, such as the one that took place at the Fukushima nuclear plant in Japan last year.

After the Fukushima accident, the radioactive strontium isotope 90Sr was found in the air around Tokyo, according to Japanese authorities, and radioactive 89Sr was identified in milk as far afield as Hilo, Hawaii, according to the Environmental Protection Agency. Milk is the primary vector for human exposure to radioactive Sr, which tends to accumulate in bones and bone marrow and has been linked to bone cancer and leukemia.

Chemistry professor Allen Apblett and his research group had been using nanoparticles to remove uranium from water, but after the events at Fukushima, they realized their technology could be made to take Sr out of liquids. He presented the work at the American Chemical Society national meeting in San Diego on Tuesday.

The group’s technology uses calcium tungstate (CaWO4) nanoparticles, which swap their calcium ions for Sr ions. The tungstate preferentially binds to Sr ions, instead of Ca ions, because of the former’s larger radius.

“It’s a chemical reaction that works its way from the outside of the particle to the core,” Apblett explains. The particles his group uses are 40–150 nm in diameter. The smaller the particle, he says, the higher the surface area, and therefore the higher the reactivity. The particles are made into pellets by attaching them to alumina supports. “We’ve done lots of work where we’ve taken these materials and put them in liquid, worked them around, and checked to make sure there was no leaching of the nanoparticles” into the treated liquids, Apblett points out.

Apblett envisions loading the pellets into a porous cartridge, which consumers could put into a gallon of milk overnight. In the morning, they’d simply remove the cartridge from the decontaminated milk. “I would like to set up a system where we recover and reuse our tungsten, so consumers would return their cartridges to us, and we would recycle the material,” he adds.

Apblett’s team has also prepared iron-based nanoparticles that can remove arsenic and other heavy metals from apple juice as well as liquids, such as baby formula, prepared with brown rice syrup. The high concentration of As in these foodstuffs has been cause for concern in recent months.

“This work demonstrates how nanotechnology can be effectively and simply employed to solve a real-world problem,” comments Andrew R. Barron, a nanotechnology expert at Rice University. “More importantly, it is invisible as nanotechnology to the end user; it is just a product that works where no similar solution is possible.”

Want the scoop on the ACS meeting in San Diego? Check out C&EN Picks, a series of videos that spotlight sessions selected by C&EN staff. Reporters also fan out across the meeting to bring you news coverage. Find it all collected at C&EN’s meeting page, cenatacs.tumblr.com.

Comments
Uditha Senaratne (March 30, 2012 8:18 AM)
"Apblett envisions loading the pellets into a porous cartridge, which consumers could put into a gallon of milk overnight. In the morning, they’d simply remove the cartridge from the decontaminated milk."

Or, alternatively, use a concept similar to a Brita water filter, whereby you allow a jug of milk to filter through a cartridge comprising calcium-tungstate-coated particles in a refrigerator overnight... Probably will enhance the swapping out of the Sr content.
Reply »

Helen Dawson (January 1, 2013 1:12 PM)
Are there any applications of this for dealing with the waste water in nuclear facilities? Are there any solutions in this for the people in Fukushima?
Reply »