The Search For Glycoprotein Biomarkers Becomes Short And Sweet

Sugar Coated
[+]Enlarge
Credit: ACS Chem. Biol.
A mix of proteins (red, yellow, blue) separates on a gel according to molecular weight (top). A glass patterned with lectins, which are sugar-binding proteins (colored X’s, center), sits on top of the gel. Only glycoproteins (blue, red) stick to the lectins on the glass (bottom), allowing scientists to identify and further analyze them. 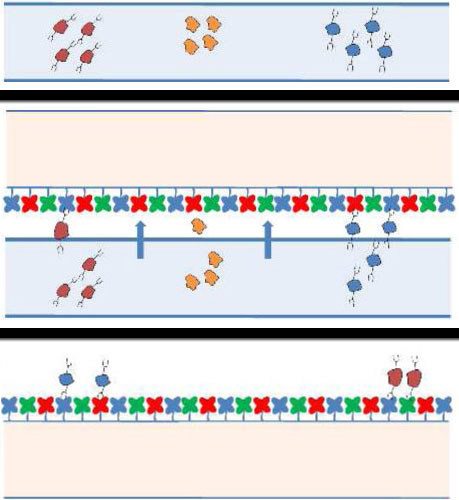 Credit: ACS Chem. Biol.
A mix of proteins (red, yellow, blue) separates on a gel according to molecular weight (top). A glass patterned with lectins, which are sugar-binding proteins (colored X’s, center), sits on top of the gel. Only glycoproteins (blue, red) stick to the lectins on the glass (bottom), allowing scientists to identify and further analyze them.

Researchers in Spain have designed a new gel-based method to identify glycoproteins present in samples of patients’ body fluids (ACS Chem. Biol., DOI: 10.1021/cb300262x). The technique could help diagnose conditions such as cancer, inflammation, and neurodegenerative disorders, they say.

Sugar polymers attached to the side chains of some proteins affect a myriad of biological processes including the immune response, the action of hormones, and the interaction of sperm with egg. The function of a glycoprotein can depend on which sugar polymers, called glycans, attach to it. Because changes in glycoproteins can reflect the presence of disease, researchers have been able to diagnose diseases, including bladder cancer, by finding specific glycoproteins in patients’ samples.

But the body has an enormous assortment of glycans that can attach to proteins, with many types of sugars and multiple ways for each sugar to connect to each other and to a protein. As a result, hunting for specific glycoproteins is challenging. Existing methods either involve laborious chromatographic steps to separate out the proteins or require researchers to know which glycan they’re looking for in advance.

Niels-Christian Reichardt, a chemist at the Center for Cooperative Research in Biomaterials, in San Sebastian, Spain, wanted a quick glimpse of the diversity of glycans in a complex sample without having to decide in advance what he was looking for. He thought arrays of lectins, proteins that bind specific sugars, could provide such a look when coupled with gel electrophoresis, a tool ubiquitous in biology labs.

In his team’s design, the researchers chose 20 commercially available lectins, an array that binds to a broad range of sugars. The team prints the lectins in repeating rows on microscope slides. Next, the researchers separate a mixture of fluorescently labeled proteins by molecular weight using gel electrophoresis. They then rest the lectin-array slide on top of the gel.

They place the gel and the slide between two glass plates and let them sit for an hour under a 1-kg weight. The researchers then use fluorescence microscopy to detect any glycoproteins that diffuse out of the gel and stick to the lectins on the slide. To learn more about any glycoproteins in a band, the researchers can dissolve the band and analyze the proteins with mass spectrometry.

Reichardt and his team demonstrated their technique by identifying known lectin-glycoprotein associations. The method even worked in complex mixtures of proteins, including in human urine.

Lara K. Mahal, a chemist at New York University, imagines that someday labs could buy kits to perform the technique, and that they would be simple enough for undergraduate students to run. The kit could even fit more than 20 lectins, Mahal says. Reichardt’s team has patented the method and is developing such a kit.

Reichardt plans to look next at plasma samples from prostate cancer patients. The researchers think they might find new biomarkers that could help diagnose the disease.